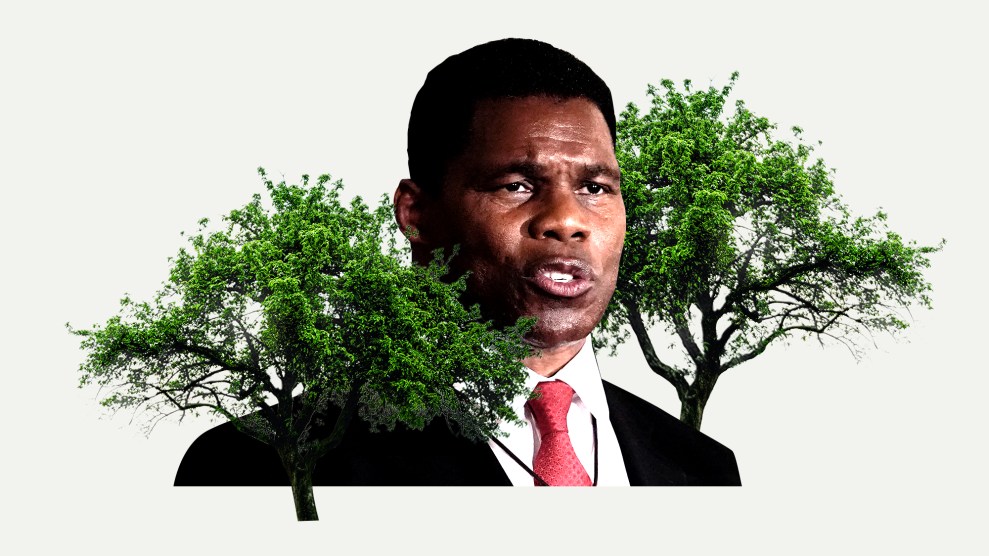 Herschel Walker has had enough of all these trees. At a campaign event in Sandy Springs, Georgia, on Sunday, the Republican Senate candidate and former football star railed against the Democrats’ Inflation Reduction Act—a sweeping law aimed at reducing health care costs, addressing the climate crisis, and easing inflation—characterizing the legislation as a big waste of money.

In particular, Walker singled out spending on trees.

“They continue to try to fool you that they are helping you out,” Walker told voters, according to the Atlanta Journal-Constitution. “But they’re not. Because a lot of money, it’s going to trees. Don’t we have enough trees around here?”

Here’s some speculation on what he meant: The Inflation Reduction Act, which President Joe Biden signed on August 16, includes $369 billion in funding for environmental programs to curb greenhouse gas emissions. Of that, an estimated $1.5 billion will help fund the US Forest Service’s Urban and Community Forestry Program, the Washington Post reports. Walker was most likely referring to this provision.

“Yes, you heard me right…Joe Biden and @ReverendWarnock are spending $1.5 billion on ‘urban forestry’ and raising taxes on those making under $200k to pay for it,” Walker tweeted on Monday, doubling down on his anti-tree stance while pointing a finger at his Democratic opponent. “Yes, I have a problem with that.” (Fact check: According to the White House, the law will not raise taxes on families making less than $400,000.)

Raphael Warnock hasn’t publicly weighed in on TreeGate 2022, or where he stands on foliage. But on Monday, the Senator tweeted, “My opponent is not ready to represent the people of Georgia.” The strategy was clear: Let Walker’s words speak for themselves.

After all, Walker’s tree faux pas is far from his first bizarre, unscientific claim on the campaign trail, as Washington Post columnist Dana Milbank remarked in a delightfully saucy op-ed this week:

Walker’s roots run deep in science policy. He noted last month that when “good air” from the United States “decides to float over to China,” it is replaced by “bad air” from China and “we got to clean that back up.”

Walker previously discovered the existence of a “dry mist” that “will kill any covid on your body.” And he was able to disprove Charles Darwin’s theory of evolution by observing that “there still [are] apes” that have not turned into humans.

Unfortunately for Walker, Americans overwhelmingly like trees. And, really, what’s not to like? As I’ve written before, trees have been shown to offer a number of benefits to humans, including better air and water quality, increased property values, and, some studies show, they may reduce crime. They sequester carbon, helping offset the emissions our factories and cars spew. And, of course, trees help provide the oxygen all of us, including Walker, need to survive on this planet.

Even Donald Trump—who allowed a “friendship” tree gifted to him by French President Emmanuel Macron to die—recognized trees’ popularity: In early 2020, the former president announced that the US would take part in an international effort to plant and restore a trillion trees globally by 2050. (The move was welcomed by environmentalists, but criticized as being insufficient in addressing climate change on its own.)

In any case, when it comes to trees, it appears Walker’s campaign is barking up the wrong one.