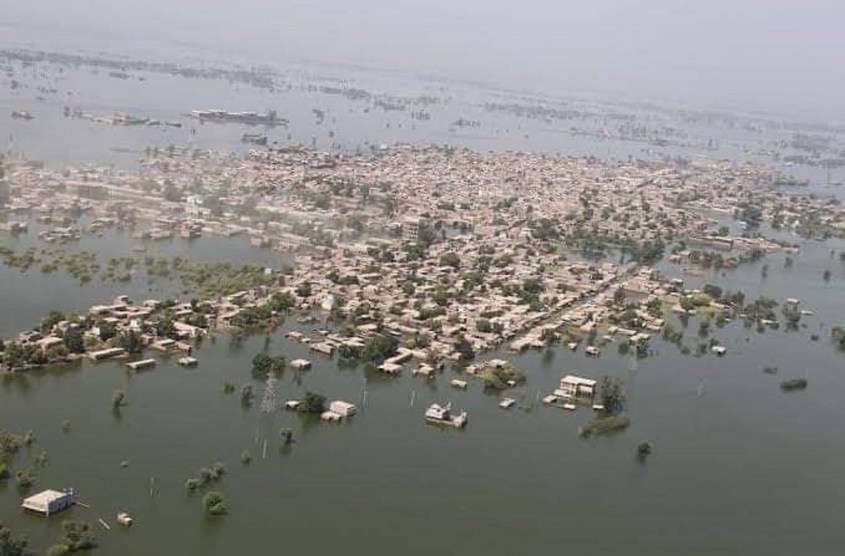 A flooded Sindh province braced for a fresh deluge as the monsoon death toll topped 1,000. PPI via ZUMA Press Wire

Aid workers have appealed for urgent donations to fight the “absolutely devastating” impact of flooding in Pakistan, as new satellite images appeared to confirm that a third of the country is now underwater.

As the UK’s Disasters Emergency Committee (DEC) launched an appeal to raise funds for the 33 million people affected, the European Space Agency released stark images based on data captured by its Copernicus satellite. Those pictures appear to confirm the Pakistani government’s assessment that more than a third of the country—an area roughly the size of the UK—has been submerged by monsoon rainfall, estimated to have been 10 times more severe than usual.

“The Indus River has overflowed, effectively creating a long lake, tens of kilometers wide,” Esa said in a statement.

The floods have claimed more than 1,100 lives, including 399 children, destroyed more than a million homes and swept away crops, livestock, and major infrastructure such as roads and bridges.

On Thursday, Saleh Saeed, chief executive of the DEC, the umbrella organization for 15 leading UK aid charities, implored the British public to help. “Time is critical, with conditions expected to get worse as the rains continue,” he said. “We are urging everyone: Please give whatever you can.” Maryam Imtiaz of Care Pakistan said it was clear the emergency was “not under control.”

“The situation on the ground is absolutely devastating…We need as much help as we can get,” she added.

The old man “had actually helped his son and grandchildren evacuate and now he had lost them. He didn’t know where they are.”

Aid workers are battling immense logistical challenges to get to millions of people in need, particularly in south-eastern Sindh province where the water level remains high. Even in areas where the water has slightly receded, aid distribution is complicated by damaged roads, cut power lines and blocked railways.

“[It] means aid agencies are struggling—it’s a challenge to get aid from A to B,” said Waseem Ahmad, CEO of Islamic Relief Worldwide. “And also the commodities that are available for relief agencies and people are going down [in quantity].”

Speaking from the north-western Khyber Pakhtunkhwa province, Ahmad said he had been in the country for the 2010 floods, which killed nearly 2,000 people, but this was worse. “The situation…is absolutely chaos everywhere. People are on the roadside, waiting for humanitarian assistance, like water, food, shelter—and this is unprecedented in the history of Pakistan. In 22 years of my experience as [a] humanitarian aid worker, I never saw such destruction caused by floods.”

He had met a woman whose home and livestock had been washed away, he said. “She pointed to a place [that] used to be her home. I only could see water there. And that’s the scale of destruction that’s unfolding in Pakistan.”

Another humanitarian worker on the ground, Ajeeba Aslam, of HelpAge International, said 2.3 million of the 33 million people affected are believed to be elderly, and deemed particularly vulnerable as they are often unable to reach makeshift camps for the displaced.

A colleague in Sindh province had told her about an old man he had met “on a railway track looking very desperate.”

“He had actually helped his son and grandchildren evacuate and now he had lost them. He didn’t know where they are. And he really had trouble in walking, so he had no shelter, no food, water, nothing,” she said.

In a country already suffering high levels of poverty and malnutrition, the massive destruction of crops and livestock is a particular worry, and one it is feared will mean “a very harsh winter” for millions.

Jennifer Ankrom-Khan, country director for Action Against Hunger, said the flood damage had come on top of the economic impact of the Covid pandemic and the spike in food prices caused by Russia’s invasion of Ukraine. “We were already seeing huge inflation in food prices, and now we have these floods which have affected all of the crops that have been grown during the season, all of the food stores that were being maintained by different communities, by the government.”

She added: “So this is not just going to impact right now, but in the longer term.”

The Pakistani government has said the damage from the floods could total around $10 billion, and has implored the world to help as it struggles to cope with the impact of a climate crisis it did little to create.

On Thursday, the UK foreign secretary, Liz Truss, said the UK “[stood] with Pakistan” and was giving $17.3 million to help with relief efforts. A third of that would come from a pledge to match-fund the first $5.7 million raised by the DEC’s appeal, the Foreign, Commonwealth and Development Office said.

The DEC said it was “incredibly grateful” to the UK government for the pledge, but added that it would “look forward hopefully [to] the UK government increasing that pot if that’s at all possible.” The match-funding ceiling is significantly lower than in recent appeals for Ukraine and Afghanistan.