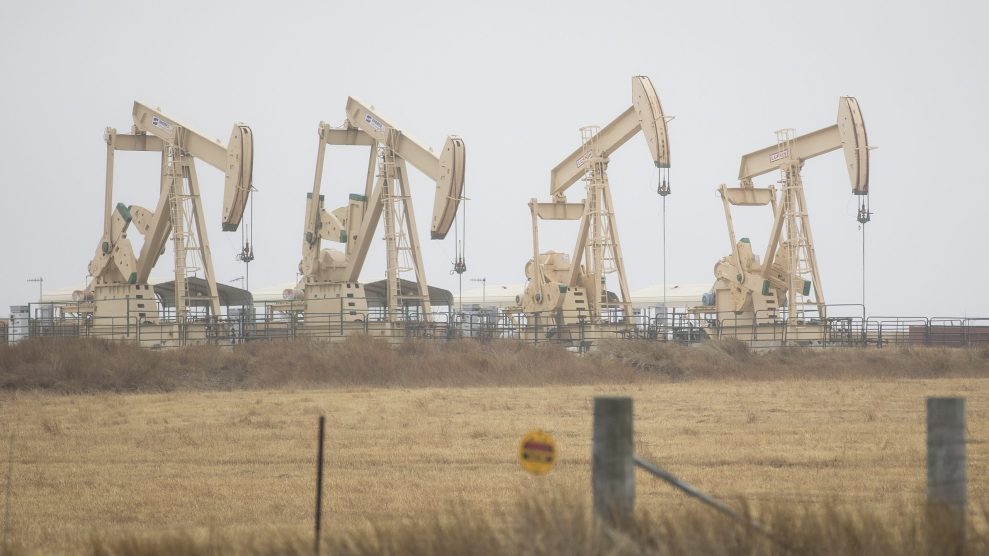 In late May, António Guterres, the secretary-general of the United Nations, stood in blue graduation robes in front of a podium at Seton Hall University in South Orange, New Jersey. Looking out at the thousand-plus graduating seniors, Guterres told them that the world was facing a climate catastrophe—and it was up to them to stop it.

“As graduates, you hold the cards. Your talent is in demand from multinational companies and big financial institutions,” Guterres said in the commencement address. “But you will have plenty of opportunities to choose from, thanks to the excellence of your graduation. So my message to you is simple. Don’t work for climate wreckers. Use your talents to drive us towards a renewable future.”

“I do feel that there’s this big pincer movement coming for the fossil fuel industry—you know, they’re going to be pinched in lots of different directions”

If they hadn’t heard the advice from Guterres, they might have gotten the idea that digging up ancient oil deposits was not a promising career path from somewhere else. The billionaire Bill Gates recently predicted that oil companies “will be worth very little” in 30 years; CNBC’s loudest finance personality, Jim Cramer of Mad Money, has declared he’s “done” with fossil fuel stocks.

It’s part of a larger social reckoning that threatens to make business harder for oil companies. Big Oil is becoming stigmatized as awareness grows that its environmentally friendly messaging, full of beautiful landscapes and far-off promises to erase (some) of its emissions, doesn’t match its actions. Well over half of millennials say they would avoid working in an industry with a negative image, according to a survey in 2020, with oil and gas topping the list as the most unappealing.

With floods, fires, and smoke growing noticeably worse, young people have plenty of reasons to avoid working for the brands that brought you climate change.

This poses a hiring challenge for oil companies, with much of their current workforce getting closer to retirement. For years now, consulting firms have been warning the industry that it faces a “talent” gap and surveying young people to figure out how they might be convinced to take the open positions.

Meanwhile, solar and wind power are booming and luring young people who want a job that fits with their values. In 2021, according to the business group E2, 3.2 million Americans worked in clean energy industries like renewables, electric vehicles, and energy efficiency—3.5 times the number that worked in fossil fuels. And this is likely just the beginning: Congress recently passed the Inflation Reduction Act, which is expected to cause an explosion of climate-related jobs.

“I do feel that there’s this big pincer movement coming for the fossil fuel industry—you know, they’re going to be pinched in lots of different directions,” said Caroline Dennett, a safety consultant who publicly quit working for Shell earlier this year because the company was expanding oil and gas extraction projects. “And that’s exactly what we need.”

If it weren’t for climate change, now might seem like the perfect time to drill for more oil. Russia’s invasion of Ukraine sent oil prices soaring this year, driving them up as high as $120 a barrel in June—the “boom” of the boom and bust cycle. The price has since dropped to $85, but could climb higher since OPEC, the oil cartel that includes Russia and Saudi Arabia, recently agreed to cut production by 2 million barrels a day.

With prices this high, oil companies would normally begin digging up more wells to increase production. But the calculus has changed. After years of losses, investors want their dividends. “Now we’re in a situation where the oil and gas companies are making a lot of cash flow…but the investors who stuck with those companies are basically saying, ‘Well, I stuck it out with you, give me my money back,’” said Peter Tertzakian, an energy and investing analyst, on the podcast Odd Lots this summer. Added to that is the growing pressure for financial institutions to divest from fossil fuels. All this, along with the “end of oil narrative,” has made investors hesitant to back new drilling projects, Tertzakian explained.

“Half of oil and gas professionals, I believe, would gladly leave the industry tomorrow if they could get a renewable energy job.”

And even if investors were interested in expanding drilling right away, many oil companies don’t have extra drilling equipment lying around ready to use, or extra people ready to operate it. Trained and knowledgeable workers are retiring or moving to other industries. The average oil and gas worker is 44 years old, a recent report from Deloitte found. The industry has mostly rehired the 15,000 workers it laid off during the 2020 crash, according to data from the U.S. Bureau of Statistics. But the workforce numbers have been on a long downward trend since 2015, when oil prices took a plunge after a supply glut. The volatility of the industry—the cycle of laying off and hiring people—is another factor that makes the jobs unappealing, the Deloitte report said.

“Half of oil and gas professionals, I believe, would gladly leave the oil and gas industry tomorrow if they could get a renewable energy job,” said Dar-Lon Chang, who worked as an engineer at ExxonMobil for 16 years before resigning in 2019 over concerns about climate change. A recent global survey by AirSwift found that 82 percent of current oil and gas workers would consider switching to another energy sector in the next three years, up from 79 percent last year and 73 percent in 2020. Fifty-four percent of those thinking about leaving picked the renewable industry as a preferred destination.

“Retention is a massive, massive problem,” Dennett said. “They’re losing their most expert, skilled, and experienced technicians, engineers, designers, operators, mechanics…I think they will be starved of new talent.”

When Big Oil comes up in the news, it’s usually something bad—oil spills, climate lawsuits, or other dirty business. The industry has drawn comparisons to Big Tobacco, and this image has started to affect workers. “We don’t want to be the bad guys,” said one anonymous participant in a study surveying oil workers’ opinions about climate change as part of a recent paper in the journal Energy Research and Social Science.

Krista Haltunnen, the author of that study and an energy researcher at Imperial College London, said that many workers believe they can drive change within their company. “A lot of them think that they’re doing the best they can for climate change or for a better society, whether they’re right or not,” Haltunnen said. Dennett, for example, worked with Shell to make oil operations safer; Chang joined ExxonMobil after assurances from recruiters that the company was “seriously considering transitioning away from oil” and researching cleaner alternatives, and that he’d be working with natural gas—sold as the “bridge fuel” to a renewable future.

Bernard Looney, the CEO of BP, has acknowledged that Big Oil’s reputation is causing problems for companies like his. In an interview with the Times of London in 2020, Looney said that oil was becoming increasingly “socially challenged.” Employees at BP were having doubts about their line of work, he said, and some job candidates were reluctant to join the company. “There’s a view that this is a bad industry, and I understand that,” Looney said at the time.

The generation that’s been striking from school to protest government inaction on climate change isn’t exactly itching to join the oil workforce. A poll by the consulting firm EY in 2017 found that 62 percent of 16- to 19-year-olds in the United States found a career in oil and gas unappealing. More than two out of every three teenagers surveyed said that the industry causes problems instead of solving them. Young people tend to view oil careers as “unstable, blue-collar, difficult, dangerous and harmful to society,” the report said, perceptions that posed a “significant obstacle” toward attracting and retaining a highly skilled workforce.

From 2006-2020, the number of business school graduates entering the oil and gas industry fell by 40 percent.

And they’re making their qualms known. Last week, dozens of students at Harvard, MIT, and Brown disrupted on-campus recruiting events for ExxonMobil, protesting that the company was undermining their future.

The trend extends from fieldwork to the front office. From 2006 until 2020, the number of business school graduates who went into a career in the oil and gas industry fell by 40 percent, according to a survey of 3.5 million MBA students conducted by LinkedIn, while the number of students recruited into renewables rose.

“The dilemma is happening in every company, because if you’re involved in projects that you know are detrimental for the environment,” what you do every single day may “test your moral values,” said Manuel Salazar, an activist in Ireland who is working to help employees push their companies to protect the environment.

Oil companies require other services to stay running—and advertisers and lawyers may get harder to come by as they turn their backs on the industry. About 400 advertising and PR agencies have signed a pledge by the group Clean Creatives to cut ties with fossil fuel clients. And as oil companies face a mounting pile of climate-related lawsuits, some young lawyers may be reluctant to defend them. Two years ago, 600 lawyers in training signed a letter to the firm Paul Weiss pledging that they would not work at the company unless it dropped ExxonMobil as a client. (It has not.) An anonymous law student graduating with student debt recently wrote in to the New York Times’ ethics column to ask whether it was okay to defend polluting companies they were “ethically opposed to” in order to pay off their loans, worrying it could create a “permanent black mark” on their record.

Chang thinks that his decade-plus as an engineer at ExxonMobil has gotten in the way of working in clean energy. He has applied for hundreds of clean energy positions since 2015 but has only gotten a few interviews. Eventually, he ended up creating his own job, a startup that’s trying to get funding to renovate people’s homes to get to net-zero emissions.

“I think that people who go into renewable energy, they tend to be suspicious of people who are trying to leave the oil and gas industry,” Chang said. While there may be some “bad apples,” he thinks the majority of oil and gas employees “are legitimately trying to do the right thing”—and would leave if they could.