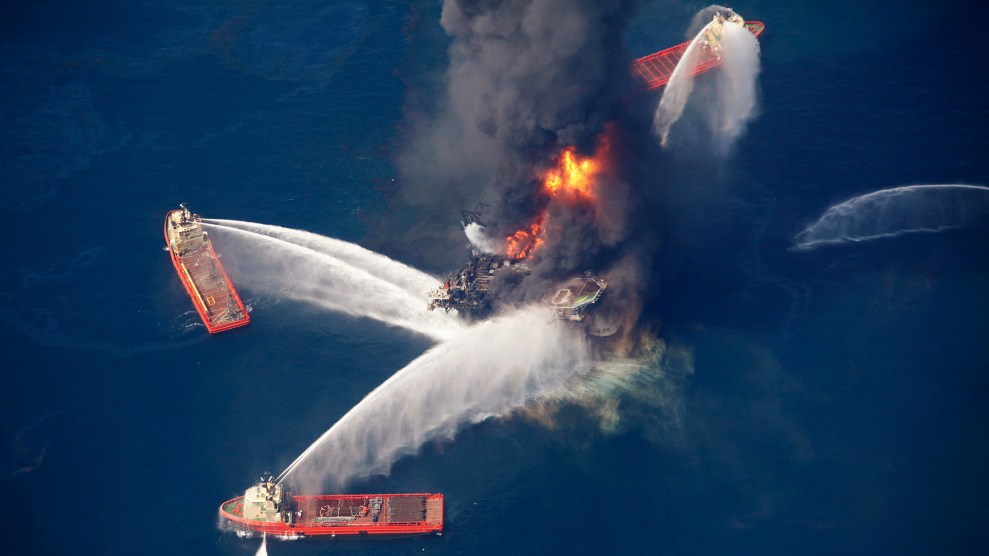 BP's Deepwater Horizon rig burns in April 2010 following an explosion that led to the worst oil spill in US history.Associated Press

Campaigners have urged governments to intervene after oil companies were accused of misleading the public about their commitment to reducing carbon emissions.

Oil and gas companies including Britain’s Shell and BP were urged to “stop their deception” this week as the US House committee on oversight and reform released documents showing that oil industry executives privately downplayed their public messages on efforts to tackle the climate crisis.

The memo claimed that internal BP documents highlighted how carbon capture and storage (CCS)—a nascent technology that involves inserting CO2 emissions into underground rock formations—could “enable the full use of fossil fuels across the energy transition and beyond.”

Congressional investigators also unearthed an internal Shell email discussing carbon capture, utilization, and storage (CCUS) in which an executive said: “We want to be careful to not talk about CCUS as prolonging the life of oil, gas or fossil fuels writ large.”

The committee said internal Shell messaging guidance—developed to “insulate Shell” from lawsuits about “greenwashing” and “misleading investors” on the climate crisis—calls on employees to emphasize that net zero emissions is “a collective ambition for the world” rather than a “Shell goal or target.”

“My committee’s investigation leaves no doubt that, in the words of one company official, big oil is ‘gaslighting’ the public.

The guidance tells employees: “Please do not give the impression that Shell is willing to reduce carbon dioxide emissions to levels that do not make business sense.”

In separate documents, the oil companies ExxonMobil and Chevron appeared to ask the industry-led Oil and Gas Climate Initiative (OGCI) to “remove language that potentially commits members to enhanced climate-related governance, strategy, risk management, and performance metrics and targets” and to avoid any “explicit commitment for OGCI companies to align their advocacy with their climate related positions”—including advocacy for the 2015 Paris agreement.

Climate campaigners and some investors have pushed energy companies to commit to more ambitious emissions reduction targets. The activist investor Follow This has tabled resolutions at shareholder meetings in an attempt to get companies to agree to targets in line with the Paris accord.

Shell lost a landmark ruling in the Dutch courts last year, when a judge ordered it to cut its global carbon emissions by 45 percent by the end of 2030 compared with 2019 levels. Campaigners hope the incoming chief executive, Wael Sawan, whose appointment was announced on Thursday, can increase the company’s investment in green energy.

The committee said that, after Shell posted on Twitter asking others what they would do to reduce emissions, a communications executive wrote privately that he agreed this could be seen as “gaslighting” the public. “We are, after all, in a tweet like this implying others need to sacrifice without focusing on ourselves,” he said.

Carolyn Maloney, the chair of the House committee on oversight and reform, said: “As we face more deadly, extreme weather around the globe, fossil fuel companies are reaping record profits and ramping up their misleading PR tactics to distract from their central role in fueling the climate crisis.

“My committee’s investigation leaves no doubt that, in the words of one company official, big oil is ‘gaslighting’ the public. These companies claim they are part of the solution to climate change, but internal documents reveal that they are continuing with business as usual. I call on the big fossil fuel companies to stop their deception and cut their emissions now—before it is too late.”

Jamie Peters, a campaigner at Friends of the Earth, said: “Big oil firms like Shell, Exxon, and Chevron can try to gloss over their murky PR image as much as they like, as we’ve seen in the millions of dollars pumped into disingenuous greenwash campaigns by the industry. But though unsurprising, this bombshell disclosure confirms what remains utterly transparent about big oil. That it has every intention to keep on extracting in pursuit of profit, rather than transforming how it operates for the sake of our communities and our planet.

“Millions are already experiencing dangerous climate breakdown in extreme heatwaves and devastating floods, like those in Pakistan, as the world’s biggest polluters continue to shirk their responsibilities. They’ll continue to act only in the interests of their shareholders unless governments intervene.”

The Guardian revealed last month that BP has spent more than £800,000 on social media influence ads in the UK this year that champion the company’s investments in green energy.

A Shell spokesperson said: “Of the nearly 500,000 pages provided to the committee, the small handful they chose to highlight are evidence of Shell’s extensive efforts to set aggressive targets, evolve its portfolio, and meaningfully participate in the ongoing energy transition.”

An ExxonMobil spokesperson said: “We have supported the Paris agreement from its start in 2015 and continue to support the US government’s participation in the framework. The selective publication of dated emails, without context, is a deliberate attempt to generate a narrative that does not reflect the commitment of ExxonMobil—and its employees, to address climate change and play a leading role in the transition to a net zero future.”

BP told Bloomberg it has set near-term targets consistent with its ambition to become a net zero company by 2050.