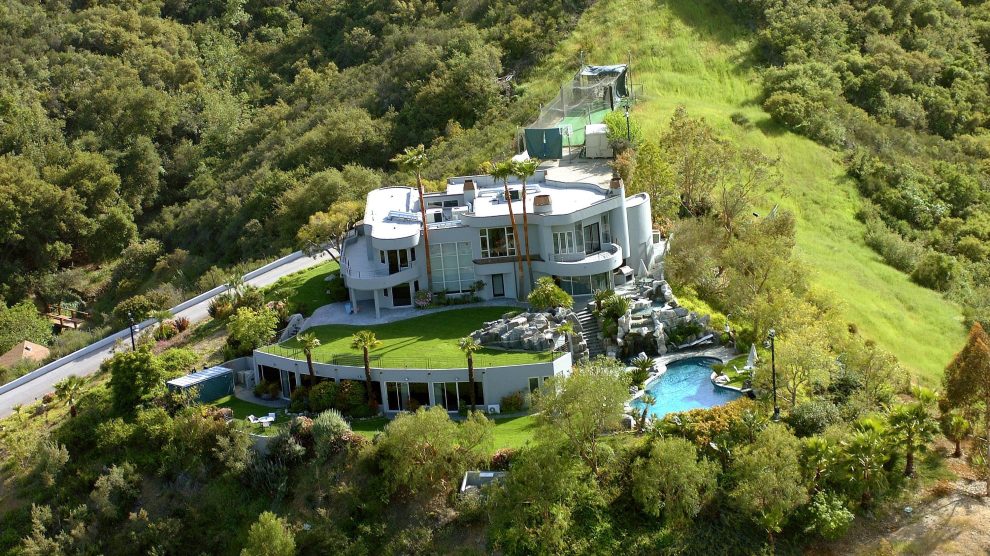 Los Angeles is living through a historic drought, but that hasn’t stopped some of its most famous residents from keeping their mega mansion lawns and ornate gardens well watered. In response, local authorities have turned to a surprisingly simple trick for keeping the wealthiest in check.

That solution is a tiny metal disc known as a “flow restrictor.” The restrictor can be installed in minutes over the pipes of chronic wasters, dramatically slowing down a home’s water flow.

Restrictors have already been placed on homes owned by multiple celebrities—including comedian Kevin Hart, rapper The Game, and Kourtney Kardashian’s ex, Scott Disick, according to water district records reviewed by the Guardian. Other famous names could be next. Addresses linked to Kim Kardashian, Sylvester Stallone, and Madonna have all been included on lists of violators who were eligible for flow restrictors.

For water authorities, it’s an experiment in holding the super-rich accountable to the same standards as everyone else. “We have taken a very firm position on being equal. It doesn’t matter who you are, how much money you make, how well known you are: all of you are being treated the same,” said Mike McNutt, a spokesperson for the Las Virgenes water district, which serves areas like Calabasas and Hidden Hills that are popular with celebrities.

With a restrictor, “you have to be really water conscious” because “you can’t use two things at the same time.”

As California’s decades-long megadrought deepened this year, water authorities across the state have issued mandatory cutbacks, enforceable with fines. But the Las Virgenes water district had a particular challenge, McNutt said: Their customers are so rich that monetary penalties are unlikely to change their behavior, even as the district mandated a 50 percent reduction in outdoor watering.

So Cason Gilmer, 36, the district’s senior field customer service representative, headed to the water district’s workshop, and started tinkering around with a mechanical solution. The result was the small yet mighty flow restrictor, a disc made out of food-safe stainless steel with a tiny hole at the center. It has the power to limit water flow so sharply that it’s difficult to shower and wash dishes at the same time, while outdoor lawn watering becomes impossible.

Popping a flow restrictor into the water pipe outside a customer’s residence takes only about 10 minutes, and the district adds a seal and a sign warning of a $2,500 fine if the device is tampered with, McNutt said.

Gilmer says he initially tested the device on his own house and it worked just as he’d hoped. The sinks and toilets “worked fine,” the shower operated at about 60 percent of normal volume, but “you have to be really water conscious” because “you can’t use two things at the same time.”

For the most part, customers, even celebrities, have been reasonable, Gilmer said, and not thrown fits when presented with the risk of having their water flow slowed to a trickle.

The lawn around Kourtney Kardashian’s pool in Calabasas had gone brown by September, suggesting that the reality star’s household had made changes after making it onto the long list of customers eligible for a flow restrictor, CBS News Los Angeles reported. In contrast, the lawn outside Kim Kardashian’s mansion was still “a perfectly-manicured green,” the TV station reported.

A Hidden Hills mansion reportedly owned by Madonna, which is currently on the market for nearly $26 million, narrowly avoided a flow restrictor installation in July, after documenting to water district officials that a leak at the property had been repaired. Representatives for Madonna and the real estate agent did not respond to requests for comment.

A handful of celebrities, including environmentalist Erin Brockovich and former NBA star Dwyane Wade, have made public statements about what they’re doing to use less water after being featured in local news segments about boldface names violating drought restrictions.

Others have pushed back: A representative for Sylvester Stallone said in a statement that the film star is trying to keep more than 500 mature trees on his property alive, and that he has taken other measures to reduce water use, and is working with the water district to resolve the situation.

A residence becomes eligible for a restrictor when it has exceeded its water limit by 150 percent at least four times since December 2021. But while more than 1,600 customers in the district have met this criteria, McNutt said, they have actually installed the device very sparingly—just six or seven dozen installations through early September.

The device is only in place for two weeks, and the water district is not allowed to cut off access to potable water for health reasons, McNutt said. So far, they said, the tactic has faced no legal challenges.

Before their water use is cut, customers have multiple opportunities to talk to water district officials and change their ways. Even signing a letter of intent to meet conservation goals is enough to avoid a flow restrictor, though the district will continue to check to see that customers comply, McNutt said.

McNutt and Gilmer believe that the flow restrictor is already having a massive deterrent effect. Driving around the district earlier in the summer, they used to see lots of green lawns, despite the outdoor watering limits. By August, lawns were looking browner. News crews who want to do a ride along with water district employees as they searched for drought flouters have ended up disappointed, with few if any rule-breakers to be seen, McNutt said. Some households have even taken to spray-painting their lawns green as a way to reduce water use, he and Gilmer said.

As far as they know, Las Virgenes is the only water district in California that uses flow restrictors, but their unique approach is drawing national interest. They’ve been fielding inquiries from Texas and Florida, as well as other California water districts. Gilmer said it’s similar to devices used to slow water flow in agriculture, but that there’s nothing exactly like it, and he’s exploring getting a patent.

McNutt said he wished more American celebrities would use their own skills to focus on the water crisis: “I am asking any celebrity, any of them, to step up and use their platforms to talk about water conservation, to talk about climate change.”