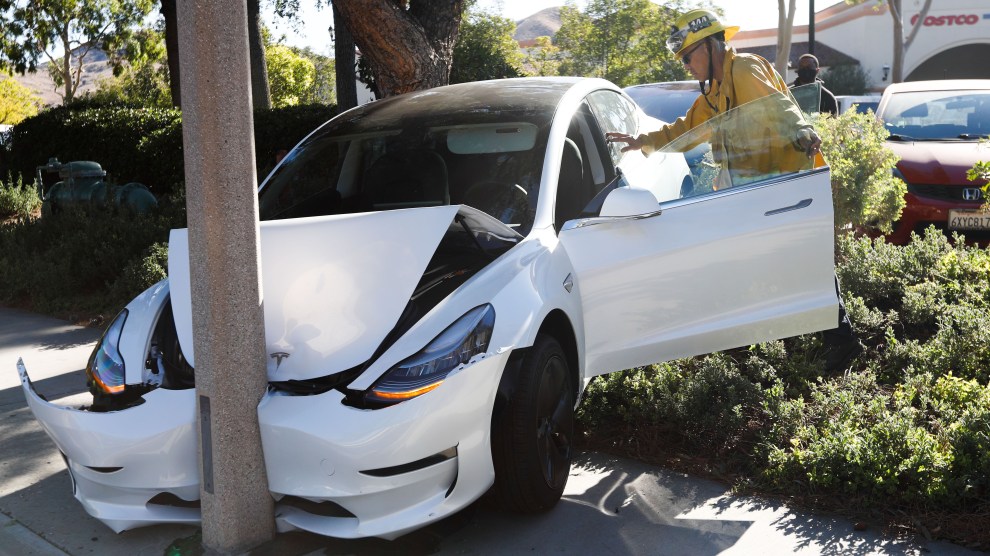 I bet all that automobile wreckage is great for the environment.Patrick Fallon/Zuma

So-called “self-driving” Teslas keep crashing. During a four-month period this year, 11 people died in vehicle crashes involving automated driving systems in the United States, according to new government data reported by the Associated Press. Ten of the wrecks involved Teslas. While it’s not definitive whether the technology itself was to blame, the crashes suggest that Elon Musk’s Autopilot technology is far from foolproof.

Luckily, there’s a simple solution: Take the bus. The best autopilot technology in the country is public transportation.

If you want to play Candy Crush while en route to your destination, consider a train. If you want to read an article while listening to an album, consider the unique experience of a trolly or a ferry. And if it bugs you that you cannot do any of these things—because you live in a country with depleted public transit infrastructure—that’s totally fair. Luckily, we can fix this issue without having to invent anything new. We just need to build.

Elon Musk would like you to think that you can turn on a Tesla, tune in, and drop out. In 2016, he claimed that Tesla’s autopilot system would drive “probably better than a person right now.” Last week, he touted a $15,000 “Full Self-Driving” software add-on, saying, “The car will be able to take you from your home to your work, your friend’s house, the grocery store without you touching the wheel.”

The language on Tesla’s website is more realistic. “Autopilot, Enhanced Autopilot and Full Self-Driving Capability are intended for use with a fully attentive driver, who has their hands on the wheel and is prepared to take over at any moment,” it says. “While these features are designed to become more capable over time, the currently enabled features do not make the vehicle autonomous.”

Anecdotally, though, plenty of Tesla drivers do take Autopilot as carte blanche to put their feet up. In 2018, an Apple engineer who appeared to be playing a video game on his phone died when his Tesla Model X hit a concrete barrier in California at 71 miles per hour. In 2019, a Tesla Model S operating on Autopilot crashed into a parked car and killed a 22-year-old woman after its operator leaned over to pick up the cellphone he had dropped. In 2020, a North Carolina driver was reportedly watching a movie on his phone when his Tesla crashed into a state trooper’s vehicle.

Multiple state and federal agencies are concerned. Yesterday, the Wall Street Journal reported that the Securities and Exchange Commission was conducting a civil investigation into Tesla executives’ statements about Autopilot’s safety. Meanwhile, the Department of Justice has launched a criminal investigation into Tesla’s claims about Autopilot, according to a Reuters report. And why not throw in a California Department of Motor Vehicles false advertising lawsuit for good measure?

When I told my friend this evening that I was working on a story about self-driving cars, she said, “It seems like that could only work if the cars were on some type of track.” She was onto something. About 4,000 years ago, humans started putting vehicles on tracks. We’ve gotten very good at it. Now, you can ride the subway in New York City, take a cable car in San Francisco, or zip across Japan on the Bullet Train with negligible odds of killing a pedestrian or dying in a fiery crash. During your commute, no one will fault you for bending over, playing a video game, or watching a movie on your phone—as long as you’re wearing headphones. The cheapest Tesla model will run you $46,990. A MetroCard is $2.75. As Malcolm Harris has argued, the bus can even fight inflation.

We should move toward a world where everyone can fall asleep on the way to work, with no bigger consequence than a little drool on a stranger’s shoulder.

And we don’t need a new version of autopilot to make that happen.