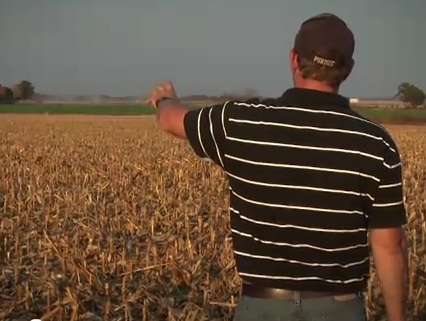 In Dow's new promotional video, a farmer contemplates the specter of 2,4-D/Roundup cocktails raining down on his corn. Screenshot from Dow's video.

Monsanto’s Roundup Ready weed-killing technology, which has conquered corn, soy, and cotton country, stands at the brink of failure, choked by a spreading thicket of Roundup-resistant weeds. But industrial-scale farmers should have no fear, for Dow Agrosciences has hatched a product that will set all of that right. Dow’s novel corn product Enlist, engineered to resist not only Roundup but also another herbicide called 2,4-D, will make fast work of those “superweeds” and restore order to the farm belt.

I know that’s true, because I just watch this Dow-produced video:

That’s the pitch, anyway, for the product, which is currently under review by the USDA for approval. But as I reported a while back, Dow’s new technology will likely be much better at selling herbicides and pricey new seeds than it will be at solving the superweed problem. Indeed, it will ultimately probably accelerate the superweed problem. It’s based on the premise that the problems caused by genetically modified industrial agriculture can only be solved by an intensifying genetically modified industrial agriculture.

Like many a marketing pitch before it, the one in the video topples under examination like a weed under a mist of 2,4-D—a nasty chemical that once made up the (less toxic) half of the infamous Vietnam-era defoliant Agent Orange.

Here’s why. Roundup-resistant weeds developed because for years farmers doused millions of acres each year with the same herbicide. Dow proposes that by planting corn that can resist  a second herbicide, and then raining down a cocktail consisting of both herbcides, farmers can kill all their weeds in one go, and never have to worry about resistance. They insist that since the two herbicices have different “modes of action”—that is, they kill plants in radically different ways—it’s extremely unlikely that weeds will develop resistance to a mix of the two.

But a January paper by Pennsylvania State University crop scientist David A. Mortensen shreds that notion. Mortensen showed that Dow’s new product would likely lead to a sharp jump in herbicide use, because Dow has been promoting a mix that combines current rates of Roundup use with roughly equal amounts of 2,4-D. Second, and more devastating, Mortensen argues that the rise of weeds resistant to the Roundup/2,4-D cocktail is nearly inevitable. He points to several documented examples of weeds evolving resistance to multiple herbicides. And if resistance does develop to Dow’s new product, it could mean a windfall for the company, because farmers will soon be ramping up their doses of the mix, just as they did with Roundup as the first “superweeds” began to gallop out of control.

That scenario amounts to an excellent business model for an agrichemical firm, but it could have disastrous consequences for ecosystems in corn country. Here’s the Natural Resources Defense Council on 2,4-D:

Over the past 40 years, dozens of studies have shown the connection between 2,4-D and non-Hodgkin’s lymphoma (cancers of the blood) and soft-tissue sarcoma in people. Other research reveals that 2,4-D enters breast milk and semen where it disrupts normal hormone functions, which can also cause serious and lasting effects during fetal and infant development.

No one, of course, has studied the health impacts of Dow’s proposed 2,4-D/Roundup cocktail. On its own, Roundup has its own set of negative impacts on soil and people alike, and is used so voraciously that it’s  commonly found in air, streams, and even rain in the Midwest.

Now, as Orwell demonstrated, one of the most brazen tricks of propaganda is simple reversal. Having trouble selling a war? Declare it peace. Trying to move a product that will likely lead to ecological disaster? Declare it an ecological salve. And if your new product will likely ultimately burden farmers with ever-pricier seeds, ever higher herbicide needs, and ever more vexatious weeds, just tell them the new product will solve all of their weed problems.

And as the USDA considers Dow’s petition to clear its novel corn—an USDA spokesperson told me this morning that the agency still had no timeline on when it will make a decision on the product—the chemical giant’s new video does just that.