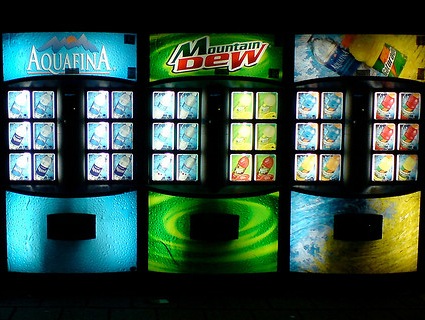 Is your kid’s public school a Coke school or a Pepsi school?

If you don’t know what I mean, consider yourself lucky. Starting in the early ’90s, cash-strapped public schools began selling exclusive “pouring rights” to one or another Big Soda company, which would then supply all the beverages sold in on-site snack bars, stores, and soda machines as well as at sports events. Along with sugary drinks, of course, the companies also stuffed the schools with plenty of advertisements.

Read more about how our sodas got too big to chug.

In 2005, according to one survey, nearly half of all public elementary schools and about 80 percent of public high schools operated under pouring rights contracts. It’s clear what the schools get for their trouble. It’s no wonder that schools turn to selling junky snack food and cutting deals with sugary soda makers to augment stingy school-lunch budgets. As of 2011, we were spending more than twice as much on air conditioning for troops in Afghanistan than we do on feeding public school kids. The soda deals subsidize other aspects of schooling, too. Here’s how the Rockford Register Star describes a contract between the Rockford, Illinois school district and Coca-Cola:

Under the existing 10-year contract, Coca-Cola paid the district $4 million upfront and an additional $350,000 a year to sell its beverages in schools. The annual payments have funded field trips, gym uniforms, SMART Boards and other frills that individual school budgets may not otherwise have afforded.

The study didn’t definitively prove that unimpeded junk food sales in schools causes the higher weight gain—they established correlation, but not causation. But the researchers did adjust their results to account for other factors that might have influenced kids’ weight, including age, race/ethnicity, and socioeconomic status.

And their finding come on the heels of another study, released in May and by the same researchers, that found that kids in California schools, where junk food sales are limited, take in significantly fewer total calories than kids in states with no such restrictions. Here’s how The Times summarized it:

The study found that California high school students consumed on average nearly 160 calories fewer per day than students in other states, the equivalent of cutting out a small bag of potato chips. That difference came largely from reduced calorie consumption at school, and there was no evidence that students were compensating for their limited access to junk food at school by eating more at home.

According to the Robert Wood Johnson Foundation, obesity rates among children ages 6 to 11 have quadrupled over the past four decades, and nearly a third of children and adolescents—more than 23 million kids and teenagers—are obese or overweight.

The latest research on junk food in schools suggests an axiom that I might have hoped would be obvious: It makes no sense to transform public schools into a vehicle for marketing junk food to kids. In 2010, President Obama signed a law requiring the USDA to come up with national standards for snack foods and beverages sold in schools. The agency has yet to complete that task.