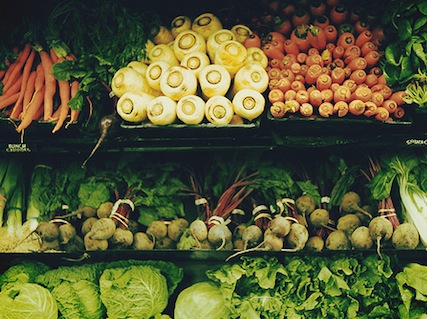 The American dietary habit of loading up on processed junk and cheap meat at the expense of fruits and vegetables may be doing more than making us put on too much weight. It also may be making us more susceptible to dying from cancer.

That’s the implication of a new study from Washington State University researcher Gary Meadows, published in Cancer and Metastasis Reviews (abstract here). Meadows identified a gap in cancer research: Most studies focus either on preventing cancer altogether or treating the initial cancer tumor, he told WSU News. But cancer turns deadly when it spreads to other organs—that is, when it metastasizes—and little work had been done to understand genes that slow or halt metastasis, so-called metastasis-suppressor genes.

According to Meadows, there’s plenty of information on metastasis-suppressor genes buried in research studies devoted to other aspects of cancer genetics. But little of it looks directly at how the food we eat effects those genes. Do certain foods, or certain compounds found in foods, have the ability to activate metastasis-suppressor genes—and thus slow the spread of cancer? For his paper, Meadows went digging through the literature to find what he could. The result: He identified “more than 40 plant-based compounds [that] can turn on genes that slow the spread of cancer,” WSU News reports. How did he do it? WSU News: “Meadows took the studies and looked to see when metastasis suppressor genes were on or off, even if original authors didn’t make the connection.”

He found dozens of examples, including pomegranate juice, which seemed to inhibit the spread of prostate cancer; glucosinolates found in cruciferous vegetables like cabbage and kale; lycopene, the stuff that gives tomatoes their color; and lupulone, a flavonoid found in hops (meaning that, yes, beer can potentially help with cancer). This seeming ability to turn on metastasis-suppressor genes is distinct from other things you might have heard about such compounds, such as their ability to act as antioxidants.

Meadows emphasizes that his findings are suggestive, not definitive—they point to the need for more focused research on the role of plant-based foods in halting the spread of cancer. “And many of these effects have not been followed up on,” he told WSU News. “There’s likely to be more compounds out there, more constituents, that people haven’t even evaluated yet.”

The cancer finding comes on the heels of other research suggesting that eating our veggies is even more important than we give it credit for. Last fall, UK researchers identified a compound in leafy greens that appears to be a critical factor for “keeping infections at bay and maintaining a healthy gut.”

Unhappily, fewer than a third of Americans eat sufficient fruit and vegetables, the Centers for Disease Control and Prevention reports. No small wonder—USDA propaganda says “eat more veggies,” but our farm policy, as crafted by Congress through the farm bill, promotes large-scale farms that crank out corn and soy to be transformed into cheap meat, sweeteners, and fats.