We are in a golden age of cookbooks, and I didn’t even come close to keeping up in 2012. Spending more time with my nose between covers already tops my list of resolutions for ’13.  But I did get to dive into some, and here are my favorites. 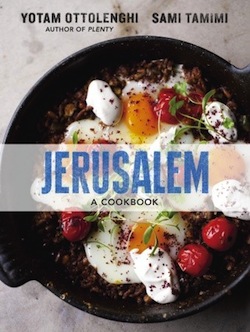 Jerusalem: A Cookbook
By Yotam Ottolenghi and Sami Tamimi

When is a cookbook not just a cookbook? When it’s co-written by an Israeli Jew and a Palestinian, and it involves the cuisines of one of the most bitterly contested pieces of land on Earth. The authors met in London, where they now run the celebrated Ottolenghi chain of delis, but both hail from Jerusalem, that ancient, divided capital and cultural mixing bowl. In the book’s superb introduction, the two write that they still “think of Jerusalem as our home… the flavors and smells of the city are our mother tongue.” What follows is a series of recipes so appealing and so rooted in the splendor of Mediterranean traditions and ingredients that you wonder if maybe, just maybe Jerusalem’s diverse food culture could redeem and unite a deeply dysfunctional and hate-ridden region. As with Ottolenghi’s previous effort, Plenty, this one is gorgeously adorned with the food photography of Jonathan Lovekin. (For this Ottolenghi and Tamimi’s fascinating backstory, see Jane Kramer’s recent New Yorker profile of Ottolenghi.) 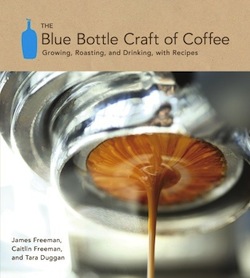 The Blue Bottle Craft of Coffee: Growing, Roasting, and Drinking, with Recipes
By James Freeman, Caitlin Freeman, and Tara Duggan

You know those bearded dudes and stylish ladies who frown and fuss over flashy chunks of Italian metal in certain cafes, as if their lives depended on crafting a perfect steamed-milk rosette in each cup? They represent US coffee culture’s so-called “third wave”: obsession over the beverage’s every aspect, from the sourcing of raw beans to the cookies served alongside a finished cup. And now they have their Bible: James and Caitlan Freeman’s The Blue Bottle Craft of Coffee (written with Tara Duggan). Launched on a career as a musician, James followed his nose for coffee first to home roasting, then to micro-scale commercial roasting, then to a kiosk in San Francisco’s Ferry Plaza market, and finally to the Blue Bottle micro-empire in San Francisco and New York. In the book, he delivers that story along with lucid descriptions of coffee’s journey from bean to cup, including everything you’d ever want to know about brewing an impeccable cup at home. Then Caitlan, an accomplished baker who James met selling her wares at Ferry Plaza and then married him, delivers the secrets of the Blue Bottle’s equally stunning pastries (try the granola, and the biscotti!). As you’d expect from a couple so focused on every aesthetic detail, The Blue Bottle Craft of Coffee is gorgeously put together, pretty to look at, and a pleasure to hold. 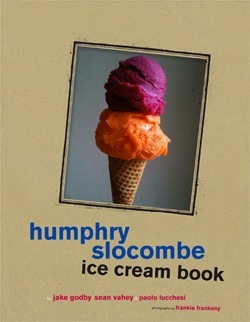 Yes, I know: Food is a serious topic. It involves massive economic machinations, vast ecological disruption, major inequality and injustice. But I need for it to have a frivolous side, too: I need to live in a world that has ice cream. And if I were to construct, from whole cloth, my ideal ice cream parlor, it might just be Humphry Slocombe, a tiny, shabby shopfront in San Francisco’s Mission district. I mean, these guys get that ice cream is silly stuff. In the introduction to this charming volume, author/proprietors Godby, Vahey, and Frankeny describe the germ of the idea that became Humphry Slocombe, originally conceived as an ice cream truck: “Jake’s first instinct was for a little rock ‘n roll ice cream truck that would make appearances at farmers markets and parks. He envisioned a graffiti-covered, run-down ice cream truck with punk music bellowing out of it. Hell, it would basically be CBGBs on wheels, sans needles.” The punk-rock aesthetic extends to some of the ice cream combinations, like the celebrated one featuring bourbon and corn flakes. In short, this book is almost as fun as the Mission ice cream shop, and it’s a solid primer on how to make good ‘scream. 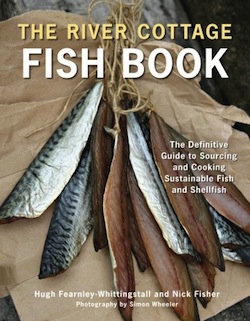 Last year, UK chef Fearnley-Whittingstall made my “favorite cookbooks” list with his manual for everyday cooking, which I declared, the “most charming and irresistible cookbook I’ve come across in ages.” He’s back this year with a more ambitious and serious tome—and again, he’s hit a homerun. The idea here is simple, teased out in a lucid and highly informative introduction: seafood is precious, vital to humanity’s evolution and its future, and yet under attack on a variety of fronts, from overfishing to climate change-induced ocean acidification. That means we have to be extremely careful about what we harvest from the sea, and then cook it into a way that wastes as little as possible while delivering maximum flavor. So Fearnley-Whittingstall focuses on plentiful species and advocates buying whole fish and then breaking them down at home. And he proceeds to teach us how to do that, step by step. As always with Hugh, the recipes are straightforward and brilliant. If you love the sea and want to be able to eat from it, too, this is your book.