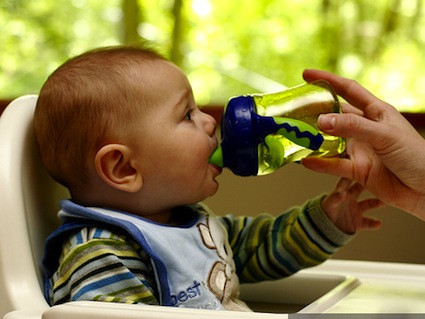 Bisphenol-A (BPA) is an industrial chemical found in everything from food-can linings to cigarette filters to retail receipts. Nationwide testing by the Centers for Disease Control and Prevention found it in “nearly all” of its subjects. A growing body of research has established BPA as an endocrine-disrupting chemical that does harm at tiny doses. But is BPA no big deal, after all?

That’s the message of a presentation given at the annual American Association for the Advancement of Science last month by Justin Teeguarden, a scientist with the Pacific Northwest National Laboratory, a lab that operates under contract with the US Department of Energy. According to a PNNL press release about the presentation, Teeguarden analyzed 150 BPA exposure studies and found that “people’s exposure may be many times too low for BPA to effectively mimic estrogen in the human body.” The study’s funder, the press release adds, was the US Environmental Protection Agency.

Teeguarden’s presentation drew wide media attention. The Guardian, the Wall Street Journal, Agence France-Presse, and the Independent all weighed in with comforting reports about the possibly innocuous nature of BPA. Writing on his Discover Magazine blog, Keith Kloor even chided me for not mentioning Teeguarden’s work in my post last week about a recent study on BPA and other harmful chemicals.

But before you dust off that old BPA-laden sippy cup for your kid, it’s worth digging a little deeper into the source. First of all, all of those media reports neglected to mention that Teeguarden’s assessment has not been published—in a peer-reviewed journal or anywhere else.

The lack of publication combined with Teeguarden’s refusal to release a presentation he has delivered in a public forum make it extremely difficult to assess his project. Laura Vandenberg, a postdoctoral fellow at Tufts who has published research finding significant levels of BPA in human blood, told me that it’s “highly unusual” for an unpublished work to generate so much attention. When a reporter asks her to comment on a study, she told me, “what I normally do is to ask for a copy of the manuscript,” she said. In this case, of course, there is no manuscript available.

And it’s not even the lack of peer review that makes it difficult to comment on the findings. “A lot of garbage gets published under peer review, but at least you can dig into the details,” she told me. “This [Teeguarden’s study] isn’t written down anywhere.”

And while the current study was funded by the EPA, in the past Teeguarden has received support from the plastics industry for research on BPA and other hormone disrupters—and has co-authored work with industry-employed scientists. This 2005 paper on the intricacies of measuring how humans metabolize BPA, for example, was funded by the American Plastics Council, the plastics division of the chemical industry trade group the American Chemistry Council (ACC). Teeguarden’s co-authors on that paper included a researcher employed by Dow Chemical, a major maker of BPA. A 2004 paper co-authored by Teeguarden, this one on endocrine-disrupting chemicals, acknowledges funding from the American Chemistry Council. Another paper on endocrine disruptors, this one from 2002 and co-authored with a DuPont scientist, also disclosed funding from the ACC. These papers focus on the subtle differences of human and animal studies—and downplay the importance of animal studies. And R.J. Reynolds Tobacco Company funded this 2013 Teeguarden paper on the merits of World Health Organization recommendations to “establish upper limits for known toxic chemicals in tobacco products,” which the authors concluded would be ineffective.

And while Teeguarden’s place of employment, Pacific Northwest National Laboratory (PNNL), does receive substantial funding from DOE, it operates under the wing of an entity called  Battelle, which describes itself as the “the world’s largest nonprofit research and development organization, with over 20,000 employees at more than 100 locations globally.” To run the Pacific Northwest National Laboratory, Battelle gets 69 percent of its $1.1 billion annual budget from the DOE. Other government agencies, including Homeland Security, provide another 23 percent, and private companies provide 8 percent of the lab’s funding (breakdown here). Describing her and Teeguarden’s employment status, Mary Beckman, who works as a science writer at the the lab, wrote in an email that, “Technically we are employees of Battelle, but I prefer to call myself an employee of PNNL.”

Battelle is a vast, sprawling operation, and it’s probably easy to overstate its ties to industry. “PNNL, as a federal research laboratory, and Battelle, as the world’s largest independent research organization, stake their business and reputations on providing unbiased, fact-based scientific research,” a Battelle spokesperson told me. But it’s worth noting that in 2002, it conducted a “Design of the Comprehensive Chemical Exposure Framework” for the American Chemistry Council. The document seeks to guide the chemical industry on the question of safe levels of exposure to industrial chemicals. (The document doesn’t mention BPA, but it does discuss another class of chemicals commonly found in plastics that are also feared to be endocrine disruptors, phthalates.)

All of which is merely to point out that Teeguarden shouldn’t be thought of as a government scientist. He is a researcher who has collaborated with and been funded by the chemical industry, and works for an organization that also has worked with to the chemical industry.

So what of the findings Teeguarden presented to the AAAS? Vandenberg of Tufts stressed that while it’s impossible to comment authoritatively on an unpublished study, she did attend his AAAS panel. She said that Teeguarden’s presentation essentially dismissed thousands of papers—from epidemiological studies showing correlation between BPA exposure and various maladies, biomonitoring studies showing BPA in human blood, and studies showing harm to animals exposed to low levels of BPA—”all to hold up an idea that hasn’t been published yet.”

I also checked in with Kim Harley, associate director for health effects at University of California-Berkeley’s Center for Environmental Research and Children’s Health. Harley conducts epidemiological studies looking for links between pregnant women’s BPA exposure and health effects in their kids.

She told me that there is a genuine debate about how much biologically active BPA people are exposed to—and that Teeguarden and Vandenberg represent opposite poles of it. Blood levels are more indicative of endocrine-disrupting activity than urine levels, which most researchers now use. It’s very difficult, she said, to test for it in blood, because “there’s a real chance for contamination” of data, and “researchers are still working out methodological issues.” Teegarden  co-authored a small study on humans in 2011 finding that traces of BPA in human blood were below the level of detection; Vandenberg co-authored one in 2007 finding them worrisomely high.

Harley says the jury is still out on who’s right.  Meanwhile, she and other epidemiologists keep piling up suggestive results. “Granted, they are associations and we can’t prove causality,” she said. “But when multiple, well-conducted studies start to show similar findings and when these findings are consistent with animal studies, the evidence starts to build up.” Studies like one she published in 2012, which linked BPA exposure in pregnant women with thyroid dysfunction in male babies, and the just-released one by Columbia University researchers linking mother’s exposure to asthma in kids “argue against Teeguarden’s claim that BPA levels in humans are too low to affect health,” she added.

Teeguarden and other researchers may yet show that our BPA exposure is too low to cause harm. But so far, they have proven nothing of the sort.