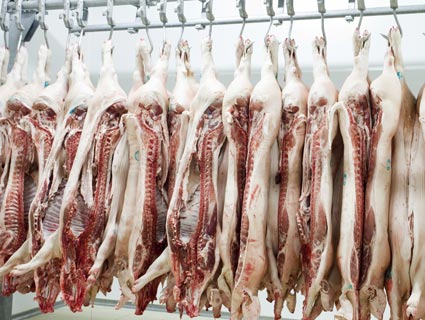 The Internal Revenue Service isn’t the only federal bureaucracy to be recently taken to task by its Office of the Inspector General. Amid considerably less fanfare in early May, the US Department of Agriculture’s OIG issued a report damning the department’s oversight of pork slaughterhouses and trashing a USDA pilot program that allows plants to operate with fewer inspectors on hand.

First a bit of background. Every Cabinet-level department and independent agency in the federal government has an OIG—a kind of in-house watchdog. While some OIGs have been convincingly accused of being toothless, the USDA’s internal watchdog has long been pretty blunt and straightforward. I’m still reeling over its 2010 report on the USDA’s porous system for halting the “contamination of meat with residual veterinary drugs, pesticides, and heavy metals.” Then there was this 2012 report about the rather cracked, so to speak, efforts to keep eggs safe.

The new pork report paints a Keystone Kops portrait of hog slaughter inspection, catching plants being cited for the same “egregious” (the OIG’s word) food safety and animal welfare violations over and over again, with little fear of reprisal or incentive to improve. “Enforcement policies do not deter swine slaughter plants from becoming repeat violators of food safety regulations,” the OIG concluded—including “violations as egregious as fecal matter on previously cleaned carcasses.”

If that sounds like just an “ooh, gross” concern, it’s not. Pigs raised on concentrated-animal feeding operations (CAFOs) expel feces loaded with antibiotic residues, antibiotic-resistant microbes, and heavy metals. (Their waste has also been spawning mysterious—and occasionally explosive—foam in the cesspits under the Midwest’s teeming hog CAFOs.) This is not stuff you want to pick up at the supermarket along with your pork chop—and the USDA is the federal agency that’s supposed to help us avoid it.

All in all, according to the OIG, the USDA’s hog inspection service issued 44,128 noncompliance citations to 616 plants facilities between 2008 and 2011—and only 28 of the plants ever got suspended. And not a single one of them ever got the equivalent of the death penalty—withdrawal of USDA inspection, which would mean that meat from the offending plant couldn’t be legally sold. And often the citations were for the same offense, over and over again.

The report lays out some specific cases. At one Illinois plant that slaughters about 19,500 hogs per day, for example, the OIG found that USDA inspectors had issued 532 citations between 2008 and 2011—of which 139 were for repeat violations. Of those, 26 were for “fecal matter and running abscesses on carcasses,” and 43 involved “exposed or possibly adulterated products and the presence of pests on the kill floor.” The result of these serial lapses? No suspension or other punishments.

The OIG report also notes that the USDA’s inspection system makes no distinction between serious threats to public health and innocuous bureaucratic errors. A slip of the pen on required paperwork gets the same response as “yellow fibrous fecal material” on an allegedly clean carcass: a slap on the wrist known as a “non-compliance report.”

In addition to monitoring for food safety violations, USDA inspectors are also supposed to enforce animal welfare standards on the kill floor, verifying that the hogs are stunned unconscious before being killed. In this area, too, OIG found multiple violations, and little incentive for offending companies to clean up their act.

But for all the sordid details, the most interesting thing in the report involves a pilot project that’s drawn little attention: an experimental inspection system, in place since 1997 on five large-scale hog facilities, allowing them to operate with faster kill lines and fewer USDA inspectors. If that sounds familiar, it’s because the USDA has been testing a similar system for chicken and turkey slaughterhouses—and signaled recently it would adopt the system nationwide. As I showed in an April post, the USDA’s proposed new poultry rules have inspired outrage among food safety and worker safety advocacy groups.

According to the OIG report, the hog version of the pilot program has been a bit of a disaster. There are 616 USDA inspected hog plants in the United States, meaning that just 0.8 percent of them are in the pilot program. But the report notes that three of those plants rank among the 10 slaughterhouses that earned the most citations between 2008 and 2011. Moreover, by far the most-cited slaughterhouse in the US over that period was in the program—it drew “nearly 50 percent more [citations] than the plant with the next highest number.” Ouch. Apparently, there’s something about removing USDA inspectors while ramping up the speed of kill lines that leads to dramatically more food safety violations.

What’s worse, the OIG report adds, in the 15 years since the rollout of the program, USDA has “not critically assess[ed] whether the new inspection process had measurably improved food safety at each swine [pilot program] plant—a key goal of the…program.”

Perhaps because of the shoddy citation record of the plants and what the OIG report calls an overall “lack of oversight” of the program, the USDA does not seem eager to roll out new rules for hog processing that involve fewer inspectors and a sped-up kill line. In its response to the OIG report, the USDA said it would “complete an evaluation” of the experimental program and determine whether to expand it to all hog plants by March 31, 2014.

As for the rest of the report’s criticisms, the USDA’s response can be summed up as: We’re working on it.