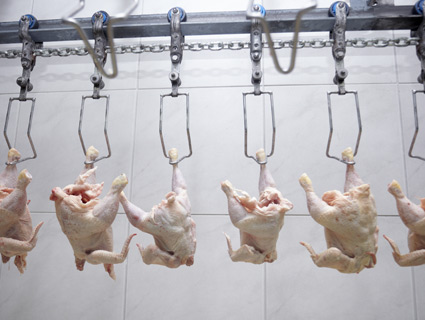 The Obama administration is on the verge of dramatically scaling back the US Department of Agriculture’s oversight of the nation’s largest chicken and turkey slaughterhouses—while also allowing companies to speed up their kill lines.

Currently, each factory-scale slaughterhouse has four USDA inspectors overseeing kill lines churning out up to 140 birds every minute. Under the USDA’s new plan, a single federal inspector would oversee lines killing as many as 175 birds per minute. That would mean there are three fewer inspectors for a production line running 25 percent faster. (The line rates at turkey slaughterhouses are, for obvious reasons, slower, but would also be sped up under the new rules).

After the idea was floated last year, it was met by massive pushback from food safety and worker advocates, who argued that the combination of more speed and fewer inspectors would lead to dangerous conditions for both consumers and workers.

Since then, the proposal has been caught in the federal rulemaking process. But on April 10, the administration released a prospective USDA budget indicating that the agency plans to implement the new rules by September 2014. And in testimony before the House Appropriations Subcommittee on Agriculture on April 16, Vilsack said the rules would be finalized “very soon,” declaring that the plan “will allow the poultry industry to continue to be profitable, and allow us [the USDA] to save some money as well.”

Indeed, according to a 2012 statement, the department expects to save $90 million over three years by firing inspectors. Meanwhile, the USDA calculates that by increasing kill line speeds, the plan will save the poultry industry more than eight times as much, or $256.6 million each year. That windfall would accrue mainly to four large companies—Tyson, Pilgrim’s Pride (now mostly owned by JBS), Purdue, and Sanderson. Together, they slaughter nearly 60 percent of the chicken consumed in the United States. (Another four companies, led by Butterball, slaughter 55 percent of turkeys.)

The USDA insists that the new system will improve poultry product safety. In his recent testimony, Vilsack said his department expects the new system will prevent “somewhere between three and five thousand foodborne illnesses” per year. Interestingly, Vilsack’s numbers are less optimistic than other recent claims from department officials: Just a year ago, Alfred Almanza, administrator of the Food Safety and Inspection Service, wrote that the plan would “help prevent an estimated 5,200” from getting sick.

The USDA is right that poultry product safety could stand improving. In an analysis of the Food and Drug Administration’s latest tests of retail meat, Environmental Working Group found that 81 percent of ground turkey and 39 percent of chicken wings, breasts, and thighs tested contained antibiotic-resistant bacteria.

How would speeding up the kill line and removing all but one inspector improve this dreadful situation? Under current rules, multiple USDA inspectors monitor the kill line for “visible defects”—feces, bruises, blemishes, blood, and the like. But the department insists that’s time poorly spent, focusing on the outward cosmetic appearance of the carcasses—quality control issues that the USDA argues should be the slaughterhouse’s responsibility. Under the new rules, company employees would instead be in charge of visually inspecting the line and removing defective birds. To control pathogens, the poultry plants would be allowed to conduct “online reprocessing”—that is, dousing all the bird carcasses that pass through the line, “whether they are contaminated or not,” with water laced with chlorine and other antimicrobial chemicals. Beyond that, the lone USDA inspector would randomly select 20 to 80 birds per shift to test them for defects. That would represent a tiny fraction of the birds processed over the course of an eight-hour shift; in a single hour, a kill line operating at the new high speed would spit out more than 10,000 carcasses.

Since the late ’90s, the USDA has been running a pilot program testing the rules at 20 slaughterhouses, and claims that the results have been sterling. But last year, Food & Water Watch used the Freedom of Information Act to obtain six months’ worth of recent inspection documents from participating slaughterhouses. The results, as I reported at the time, were alarming, and don’t suggest that the factories’ own employees are effectively inspecting the birds.

From March to August 2011, 90 percent of the defects found by the USDA inspectors involved “visible fecal contamination that was missed by company employees.” Yuck.

You don’t have to resort to FOIA to question the USDA’s claim that the new system will cut down on illnesses from eating poultry: In its publicly available 2011 evaluation of the pilot program, the USDA found that finished birds at pilot facilities were more likely to test positive for salmonella. And 2 of the 20 pilot facilities—a Tyson factory in Clarksville, Arkansas, and a Golden Rod Broilers one in Cullman, Alabama—failed the USDA’s latest test for salmonella standards. According to Food & Water Watch, that 10 percent failure rate—granted, drawn from a small sample size—is higher than the industry’s overall rate.

If the USDA is making shaky claims around food safety, it’s not making any claims on worker safety, over which it has no mandate. In his House testimony, Vilsack didn’t have much to say on the topic: “We’ve attempted to address those [worker safety] concerns by suggesting that this gives us a chance to study that issue.”

But the new rules would force workers to wield sharp knives and make repetitive motions at a kill line that, with 35 more birds going by each minute, would running significantly faster. Tragically, the federal agency that might have something to say about those conditions, the Occupational Safety and Health Administration (OSHA), doesn’t. As a fresh, devastating report from the Southern Poverty Law Center (SPLC) on poultry workers shows, slaughterhouses exist in a worker protection limbo:

Despite OSHA’s responsibility to ensure worker safety, it has no mandate to regulate processing line speeds to protect workers. The U.S. Department of Agriculture (USDA) is the only agency that currently regulates line speeds. But the USDA’s regulations are designed to guard against contamination of the product, not to protect workers from hazardous conditions.

Even under current line speeds, workers are regularly harmed. Citing OSHA figures, the SPLC reports that 5.9 percent of the poultry workers are injured each year, 50 percent more than the national average. And the report shows that workers routinely face intimidation and might think twice about reporting an injury. Here’s the SPLC, describing current conditions on kill lines:

The processing line that whisks birds through the plant moves at a punishing speed. Over three-quarters of workers said that the speed makes their work more dangerous. It is a predominant factor in the most common type of injuries, called musculoskeletal disorders. But if the line seems to move at a pace designed for machines rather than people, it should come as no surprise. Plant workers, many whom are immigrants, are often treated as disposable resources by their employers. Threats of deportation and firing are frequently used to keep them silent.

The Obama administration has clearly expressed the benefits of its new plan: minor savings for the government, major savings for Big Poultry. Testifying before Congress last year, Cass Sunstein—then serving as the famously regulation-averse chief of Obama’s Office of Information and Regulatory Affairs—hailed the poultry slaughter proposal as an example of the administration’s will to unburden industry of “cumbersome, outdated” regulation. The costs, though, don’t appear to have been reckoned with adequately, if at all.