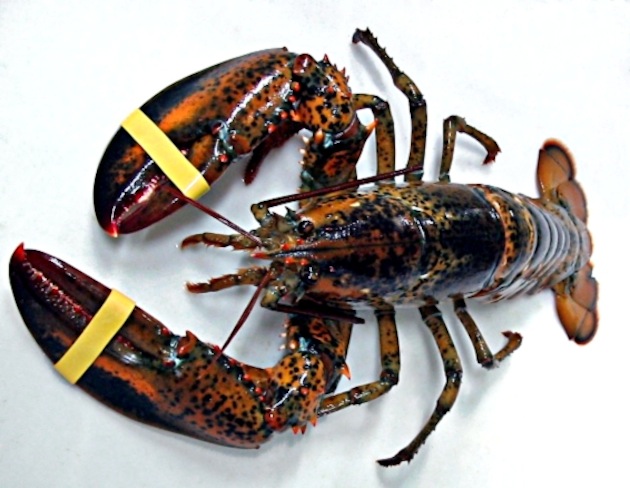 Put up your dukes: lobsters are one scrappy sea creature. <a href="http://en.wikipedia.org/wiki/File:Bugre_americanu.jpg">Roberto Rodríguez</a>/Wikimedia Commons

When European settlers alighted upon what’s now known as New England, they gaped at the bounty of the shoreline, reports William Cronon in his classic 1983 book Changes in the Land: Indians, Colonists, and the Ecology of New England. Cronon lays out contemporary accounts of coastal waters teeming with cod, streams thick with salmon, of oysters “almost a foot long.”

Lobster barely registers in Cronon’s survey of this almost mythically productive ecosystem, but it existed in abundance, unloved as food but exploited all the same. Native Americans used it as farm fertilizer and fishing bait, the Gulf of Maine Research Institute reports, and it emerged as a kind of trash food for the colonialists, who “served it to children, to prisoners, and to indentured servants.”

But something odd has been brewing off the coast of Maine for more than a decade. Despite fears of an imminent collapse, lobster landings have skyrocketed. As a Chronicle of Higher Education article put it back in 2001, “Scientists have warned that lobsters are in danger, but nobody bothered to tell the lobsters.”

Since then, the Gulf of Maine lobster fishery has only gotten more productive. “Maine lobstermen caught 123.3 million pounds of lobster during the 2012 season, which represents a 15 percent increase from 2011 and an 88 percent increase from landings two decades ago,” according to news site MaineBiz. The stuff has gotten so abundant, MaineBiz reports, that New England-area Walgreens are sprouting live lobster tanks. What gives?

As my colleagues Tim McDonnell and James West show, the Gulf of Maine’s teeming lobster population appears to be flourishing within a makeshift ecological niche created by two highly destructive human-induced forces: climate change and overfishing. The area’s fast-warming waters appear to make lobsters grow faster and reproduce more; and the great diversity of sealife enjoyed by the European settlers has largely vanished after centuries of heavy fishing pressure—and among the casualties are key lobster predators like cod.

As Taras Grescoe put it in his excellent 2008 book Bottomfeeder, “with top predators fished to a fraction of their former abundance, [the Atlantic] has become an ocean increasingly populated by shrimp, lobsters, crab, and other resilient, fast-growing crustaceans. An ocean, in other words, of bottomfeeders.”

In addition to the growth stimulation from warming waters, lobsters might be getting another boost from climate change: faster shell formation. As oceans absorbs excess carbon from the atmosphere, their acidity levels rise, and scientists have long hypothesized that acidification would harm coral reefs as well as all shell-forming sea creatures. But a 2009 study from Woods Hole Oceanic Institute researchers found that while acidic seawater caused the shells of the clams and oysters to dissolve, it actually improved shell formation for crustaceans like lobsters.

Even so, as McDonnell and West show, Maine lobsters’ unexpected abundance is leading to anxiety, not elation, among Maine’s lobstermen. Ever-expanding supply has caused prices to plunge, meaning they’re trapping more lobster than ever yet making less money.

Then there’s the specter of what happened a few hundred miles to the south in Long Island Sound, where the lobster harvest rose dramatically in the 1990s before plummeting just as rapidly—possibly because ocean temperatures there crossed a threshold above which lobsters can no longer thrive. As the Gulf of Maine’s waters continue warming, a similar fate could befall its lobster horde. In a fast-changing, unpredictable seascape, ecological niches can snap shut as quickly as they open. Grescoe laid out a a nightmare scenario in Bottomfeeder: “The lobster boom of the Atlantic …may be just a tiny blip on a slippery slope to oceans filled with jellyfish, bacteria, and slime.”

Yet lobsters are indisputably resilient creatures. In perhaps the least appetizing article in Gourmet Magazine‘s sumptuous history, David Foster Wallace trained a novelist’s cold eye on them. He pointed out that lobsters are “basically giant sea-insects” that “date to the Jurassic period.” Indeed, he continued, “they’re biologically so much older than mammalia that they might as well be from another planet.”

That means they have a long track record of surviving cataclysmic environmental change. And at any rate, we may as well enjoy them while we can. Here’s a vintage Julia Child video to remind us how to do just that.