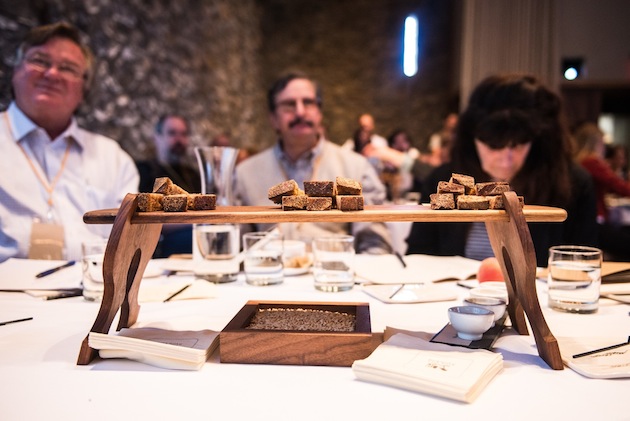 Ferran Adrià, who retired in 2011 as arguably the globe’s most decorated chef since Auguste Escoffier, is mock-furious.

Looking chic and trim with his close-cropped graying hair and sporting a black jacket over a black T-shirt, he is regaling a crowd with his lilting Catalan-tinged Spanish. The intellectual father of the highly experimental, techno-centered cooking known as “molecular gastronomy,” Adrià is renowned for the wild inventiveness of his cuisine at his now-closed temple El Bulli on Spain’s Costa Brava—think “mango anchovy ravioli foam,” or  chicken curry in which the curry is solid and the chicken is liquid. But now, with the help of a harried interpreter, he’s confronting Washington State University wheat breeder Stephen Jones about the professor’s apparent disdain for white flour.

Jones, you see, does something that few breeders have done in the past century or so: He develops wheat varieties specifically geared to be turned into top-quality, whole-grain bread—not 1970s-style bricks or the spongy logs of today’s supermarkets, but the kind of stuff you’d find in an artisanal bakery. 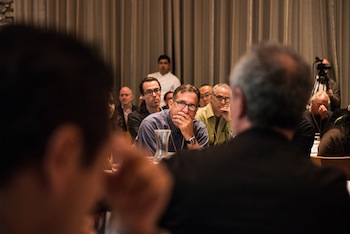 “What’s wrong with a [white] baguette?” Adrià wants to know, his eyes playfully boring into those of Jones, who’s looking slightly stunned. And then, making a dismissive gesture, Adrià asks: “Has anyone ever made a whole wheat croissant?”

It was a scene as surreal as one of Adrià’s tapas: a radical European chef challenging a salt-of-the-earth, US land grant university professor over separating flour from bran and germ—and in a high-ceiling stone-walled room that once served as a cow barn for the Rockefeller family’s country estate, no less.

I’m fairly confident when I say that last week at the Stone Barns Center for Food & Agriculture—a sprawling farm/restaurant nestled in a rural corner of Westchester County, New York, on land donated by the Rockefeller family—I witnessed the globe’s first-ever meeting between a roster of renowned chefs and a set of utterly obscure, highly accomplished plant breeders, mostly from US land grant universities.

The meeting was the brainchild of the visionary US chef Dan Barber. In his revered Blue Hill restaurants (one in Manhattan’s Greenwich Village, one at Stone Barns, site of the conference), Barber displays a culinary sensibility that’s two parts Alice Waters (reverence for, even fetishization of, seasonal ingredients) and one part Adrià-like innovation. 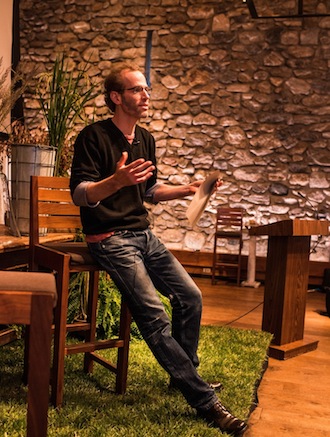 Blue Hill’s Dan Barber has seen the future, and it’s all about farmers and breeders collaborating. Kirra Cheers

Both qualities were on display at the meeting, called “Seeds: The Future of Flavor,” convened by Barber in his capacity as an advisory board member of the Basque Culinary Center, a culinary university launched in 2011 in San Sebastian, Spain, that is emerging as an emblem of Spain’s emerging status as the center of the global culinary avant garde. Barber’s fellow advisory board members read like a who’s who of international culinary innovators, and several of them attended, including Adrià, his fellow Spaniard Joan Roca, France’s Michel Bras, Mexico’s Enrique Olvera, Peru’s Gaston Acurio, and Brazil’s Alex Atala. They were joined by a glittering group of US luminaries like New Yorkers Daniel Humm (Eleven Madison Park), Bill Telepan (Telepan), Peter Hoffman (Back Forty West), and Charleston, South Carolina’s Sean Brock (Husk).

These attendees gave the meeting an electric glamor: a food-world version of what I imagine attending the Academy Awards is like. I almost involuntarily spit out my coffee when I realized the nice young British woman I was chatting with at my assigned table was none other than April Bloomfield, of the renowned New York City restaurants The Spotted Pig and The Breslin. If I had done so, I might have soiled the shirt of the unassuming fellow sitting across from me, who turned out to be David Kinch, chef/owner of Northern California’s Manresa.

In his opening remarks, Barber pointed out that for a century or so, plant breeding has been mainly focused on a few large commodity crops: corn, wheat, soy, and a smattering of widely traded fruits and vegetables like tomatoes. Moreover, increasingly dominated by agrichemical-industry interests, breeding has been geared to generating high-yielding, easily portable crop varieties, ignoring considerations like flavor, nutrition, and adaptation to diverse regional ecosystems.

Meanwhile, Barber continued, the movement to transform the US food system along healthier, more ecologically robust, and tastier lines has viewed seeds through two lenses: (1) condemning giant, patent-bearing seed companies like Monsanto; and (2) preserving heirloom seed varieties that were developed before the World War II-era rise of industrial agriculture, and which have been rapidly dying out ever since.

Preserving the fast-eroding agricultural biodiversity of the past is critical, but insufficient. “We need something between Monsanto and heirlooms,” Barber declared. He imagines a revitalized seed-breeding sector that answers not just to huge agribusiness companies but also to evolving demands for better-tasting, healthier, and regionally grown food. “If we could talk to the people a hundred years ago who bred the heirloom tomato varieties we love,” he said, “they’d wonder, ‘Why all the effort to preserve these? Why not keep going, keep breeding new varieties?'”

Cornell plant breeder Michael Mazourek, who works directly with organic farmers in the Northeast to generate  new crop varieties that thrive without pesticides, asked what must have been a provocative question to a group of chefs known for their love of experimentation: “If you consider all the produce—all the vegetables and grains—available in your kitchen, what would you change if you could?”

For breeders, the answers don’t need to be guided by the conventional demands for higher yields and suitability for long-haul travel. Mazourek and a growing number of breeders use a “completely non-GMO process” called marker-assisted selection. Using genomic tools, they identify the genes that trigger particular traits in a plant species and then select for them—greatly accelerating the process of creating desirable new seed lines. “We have this great potential to customize and refine taste, flavor, size, and functionality in the kitchen,” he said.

Barber and the farmers at Stone Barns have already been availing themselves of Mazourek’s services. Together, they’ve developed a winter squash variety called “honeynut,” a smaller, more intensely flavored version of the widely grown butternut.

Frank Morton, who plays the rare role of farmer/seed breeder in Oregon’s Willamette Valley, spoke of his work using low-tech methods—like crossing heirloom varieties of lettuce—to create entire new lines, selected for traits like vibrant pigmentation (which also means more nutrients), crunchy texture, and sweet or spicy flavor. Farmers have been doing the same thing for centuries, but in recent decades have come to rely on seed companies, not the painstaking process of selection and seed saving. Morton, whose seed operation is part of a broader market farm operation called Gathering Together Farm, is a kind of throwback to the days of farmer-breeders. He has created new lettuce (and other vegetable) varieties that shine both in the field and on the plate.

The idea of working directly with breeders seemed to send a shiver through the crowd. In a later conversation, Bloomfield said she hoped to find a breeder to develop a tomato variety for the New York region that could match the intense flavor of those grown in Northern California.

The Latin American contingent brought a different perspective. Chefs Atala of Brazil and Acurio of Peru spoke of the stunning variety of fruits, vegetables, and grains that still flourish in indigenous-populated regions of Latin America—and how that heritage is threatened by globalization and the severe economic pressures faced by smallholder farmers. Their remarks reminded me that here in the United States, where European settlers virtually wiped out indigenous populations, we have a relatively small seed heritage to preserve—and much of it has already been obliterated by the rise of industrial farming over the past half century. Hence Barber’s focus on the imperative to generate new seed lines. In Latin America, there’s much more left to defend.

Washington State’s Jones wrapped things up by bringing the conversation back to new varieties—in this case, wheat. Here Barber introduced Jones with an anecdote. Several years ago, he said, Jones had established himself as one of the nation’s leading conventional wheat breeders, creating varieties ideal for industrial-scale growing and processing, when he was called into a meeting with his dean and found himself face to face with several Monsanto executives who wanted to breed some of their genetic modifications into his wheat—a proposition that could have made Jones “lots of money,” Barber said. Instead, Jones walked out and never looked back, turning his back on commodity wheat forever. 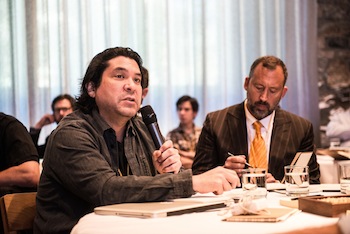 Jones explained that most modern wheat varieties are bred to be processed into white flour, with the highly nutritious bran and germ stripped away. To make what is known as “whole wheat bread,” some (but not all) of that bran and germ is mixed back in. Making true whole wheat bread from those varieties, using flour from wheat grown without separating the component parts, would result in the hard, brick-like loaves that gave whole-grain bread its bad name in the ’70s.

Jones showed a photo revealing that he may be history’s first wheat breeder whose lab is outfitted with a professional baking kitchen, complete with big ovens, gleaming steel tables, and tubs of freshly ground flour. His lab crew includes a full-time baker whose job is to turn Jones’ novel wheat varieties into bread. And then the baker, Jonathan McDowell, emerged, bearing samples of three loaves made from distinct wheat varieties bred specifically for whole wheat bread.

Each was delicious, sporting a crunchy, blistered crust and a light, airy middle, with varying levels of sweet, nutty, and just plain wheaty flavors. They were so good that this audience was largely consuming them without butter.

Even Adrià, during his spirited defense of white bread, conceded their excellence. And I reflected that bread itself—a chunk of hard crust encasing a cottony, puffy middle—is the original Ferran Adrià project. If it hadn’t been invented thousands of years ago, would even he have dreamt of creating such a wondrous thing from a bunch of rock-hard, virtually flavorless little seeds?