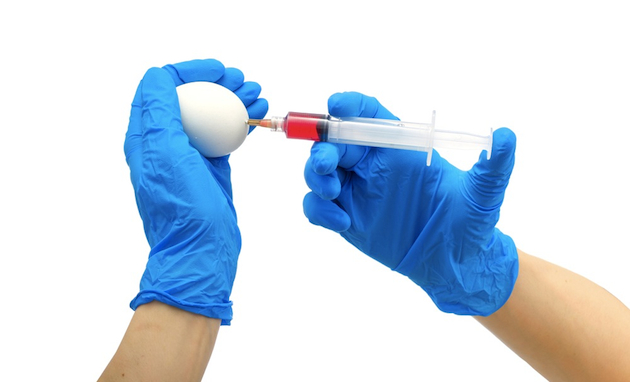 Which came first: the organic chicken or the gentamicin injection? <a href="http://www.shutterstock.com/pic-133136477/stock-photo-hands-in-blue-gloves-inject-red-liquid-into-egg-isolated-on-white.html?src=pd-same_artist-134562845-An_J0-NhxhY2EIb82W9kdw-1">Sergey Yechikov</a>/Shutterstock

When you’ve covered a topic long enough, you get the idea you’ve heard it all. Then along comes a factoid like the one I discovered while preparing my recent piece on the recent blockbuster Consumer Reports study on supermarket chicken and antibiotic-resistant bacteria. I learned that at the industrial hatcheries that churn out chicks for the poultry industry, eggs are commonly injected with tiny amounts of an antibiotic called gentamicin, which is used in people to treat a variety of serious bacterial infections.

To sterilize the small hole required to get a vaccine into an egg, the industry commonly shoot in a bit of gentamicin.

That alone dropped my jaw—what, the practice of dosing chickens with antibiotics has to begin literally in the egg? But get this: The practice is allowed in organic production, too. Organic code forbids use of antibiotics in animals, yet in a loophole I’d never heard of, such standards kick in on “the second day of life” for chicks destined for organic poultry farms. (The practice isn’t used for the eggs we actually eat—just the ones that hatch chicks to be raised on farms.)

John Glisson, a veterinarian for the US Poultry & Egg Association, told me the practice originated decades ago, when the industry began vaccinating chicken embryos to prevent a common condition called Marek’s disease, a deadly herpes virus that attacks chickens. To sterilize the small hole required to get the vaccine into the egg, the industry would shoot in a bit of gentamicin. Glisson added that it remains a common practice, but that it has declined in recent years as (he insisted) the industry has begun to move away from reliance on antibiotics. Neither Glisson nor the FDA could give me precise data on how often it’s used these days. The Food and Drug Administration allows such injections only when prescribed by a veterinarian, a spokesperson said.

So what’s the problem with giving chickens a little antibiotic boost as they start life? For starters, the practice could promote the spread of antibiotic-resistant superbugs. A 2007 peer-reviewed study of Maryland and Virginia workers in conventional chicken houses were 32 times more likely to carrying gentamicin-resistant E. coli than their neighbors who don’t work in the industry.

And Robert Martin, director of food system policy at Johns Hopkins’ Center for a Livable Future, expressed skepticism that cleaning up after a vaccine is the only function of the practice. He said that while he was heading up the Pew Commission on Industrial Animal Production back in 2007, he visited an industrial hatchery and witnessed the injections take place. “During the commission study [completed in 2008], we learned that virtually every egg is injected with very small doses of gentamcin before they go in the incubator,” he said. In addition to sterilizing the egg, he pointed to another possible benefit of the injections—that they “probably aid in rapid growth of the chick in the egg”—i.e., growth promotion, one of the reasons industrial-scale livestock producers have been relying on antibiotics for decades.

So why the loophole in organic? Bob Scowcroft, a veteran of organic-policy debates and now-retired founder of the Organic Farming Research Foundation, explained to me that back in 1990, when the Organic Foods Production Act was crafted, organic chicken production barely existed—and there were certainly no organic hatcheries. It never occurred to anyone to require that chicks come from special hatcheries, he said—such a rule would have crippled the industry from the start. “It was a chicken-and-egg thing,” he quipped.

The “no antibiotics” label, on the other hand, actually means no antibiotics—even before the second day of life.

Since then, as the organic-chicken market has boomed, there seems to have been little push to change the second-day-of-life loophole. I contacted the USDA’s Agricultural Marketing Service about the matter. Congress would need to amend the Organic Foods Production Act of 1990 to remove the exception.

That no one has tried to force such a change to strikes me as odd. In field crops, organic code requires farmers to use organically grown seeds “when commercially available.” That provision has given rise to a still small, but robust and growing, organic seed market. The rise of organic seeds is crucial to the future of organic farming, because plant strains adapted to heavy chemical use and monocrops don’t always do well in diversified, low-input systems, as organic-seed expert Matthew Dillon never tires of pointing out. But until Congress adds a similar “when commercially available” requirement for organically raised chicks, it’s hard to imagine an organic-hatchery sector developing.

Nevertheless, change does appear to be afoot in the industry. Poultry behemoth Perdue, most known for its conventional chicken, is also the nation’s No. 1 organic chicken producer, through its Coleman Natural, Rosie, and Draper brands, company spokesperson Julie DeYoung told me. And those brands source their chicks from company-owned hatcheries that use no antibiotics, she said. The reason has to do not with the organic label, but rather with another USDA-regulated label, the “raised without antibiotics” tag, which also adorn the Perdue organic brands. (In its conventional operations, DeYoung told me, Perdue has over the past five years removed antibiotics from 80 percent of its hatcheries.)

Back in 2008, the USDA determined that Perdue’s rival chicken giant Tyson had been abusing that label by subjecting eggs on hatcheries to gentamicin injections. Since then, any chicken brandishing that label can’t have ever been subjected to the controversial drug, not even in the egg. That is, “no antibiotics” means no antibiotics—even before the second day of life. So on this narrow point, the relatively new “no antibiotics” label has more teeth than the older and more formidable organic stamp.