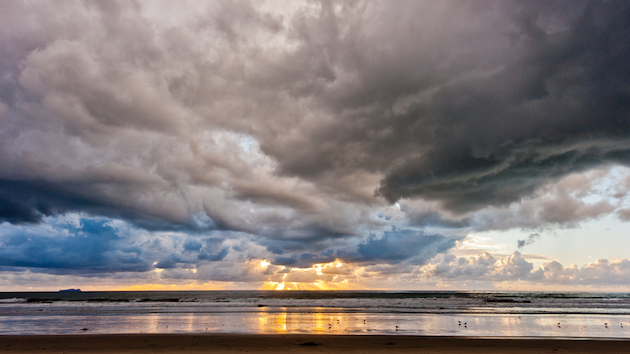 In California, news of a historically powerful El Niño oceanic warming event is stoking hopes that winter rains will ease the state’s brutal drought. But for farmers in the Central Valley, one of the globe’s most productive agricultural regions, water troubles go much deeper—literally—than the current lack of precipitation.

That’s the message of an eye-popping report from researchers at the US Geological Survey. This chart tells the story: 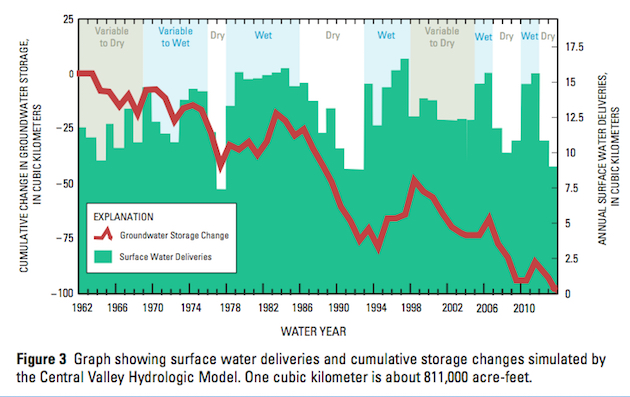 To understand it, note that in the arid Central Valley, farmers get water to irrigate their crops in two ways. The first is through massive, government-built projects that deliver melted snow from the Sierra Nevada mountains. The second is by digging wells into the ground and pumping water from the region’s ancient aquifers. In theory, the aquifer water serves as a buffer—it keeps farming humming when (as has happened the last three years) the winter snows don’t come. When the snows return, the theory goes, irrigation water flows anew through canals, and the aquifers are allowed to refill.

But as the chart shows, the Central Valley’s underground water reserves are in a state of decline that predates the current drought by decades. The red line shows the change in underground water storage since the early 1960s; the green bars show how much water entered the Central Valley each year through the irrigation projects. Note how both vary during “wet” and “dry” times.

As you’d expect, underground water storage drops during dry years, as farmers resort to the pump to make up for lost irrigation allotments, and it rises during wet years, when the irrigation projects up their contribution. The problem is, aquifer recharge during wet years never fully replaces all that was taken away during dry times—meaning that the the Central Valley has surrendered a total of 100 cubic kilometers, or 81.1 million acre-feet*, of underground water since 1962. That’s an average of about 1.5 million acre-feet of water annually extracted from finite underground reserves by the Central Valley’s farms and not replaced during wet years. By comparison, all of Los Angeles uses about 600,000 acre-feet of water per year. (An acre-foot is the amount needed to cover an acre of land with a foot of water).

The USGS authors note that the region’s farmers have gotten more efficient in their irrigation techniques over the past 20 years—using precisely placed drip tape, for example, instead of old techniques like flooding fields. But that positive step has been more than offset with a factor I’ve discussed many times: “the planting of permanent crops (vineyards and orchards), replacing non-permanent land uses such as rangeland, field crops, or row crops.” This is a reference to the ongoing expansion in acres devoted to almonds and pistachios, highly profitable crops that can’t be fallowed during dry times. To keep them churning out product during drought, orchard farmers revert to the pump.

The major takeaway is that the Valley’s farms can’t maintain business as usual—eventually, the water will run out. No one knows exactly when that point will be, because, as Jay Famiglietti, senior water scientist at the NASA Jet Propulsion Laboratory at California Institute of Technology, never tires of pointing out, no one has invested in the research required to measure just how much water is left beneath the Central Valley’s farms. Of course, averting this race to the bottom of the well is exactly why the California legislature voted last year to end the state’s wild-west water-drilling free-for-all and enact legislation requiring stressed watersheds like the Central Valley’s to reach “sustainable” levels of extraction by 2040. The downward meandering red line in the above graph, in other words, will have to flatten out pretty soon, and to get there, “dramatic changes will need to be made,” the USGS report states.

Meanwhile, one wet El Niño winter won’t do much to end the the decades-in-the-making drawdown of the Central Valley’s water horde. And people pining for heavy rains should be careful what they wish for—parts of the Central Valley, especially its almond-heavy southern regions, are notoriously vulnerable to disastrous flooding. Then there’s the unhappy fact that El Niño periods are often followed by La Niña events—which are associated with dry winters in California. The region could be “whiplashed from deluge back to drought again” in just one year’s time, Bill Patzert, a climatologist for NASA’s Jet Propulsion Laboratory, recently told the Los Angeles Times. “Because remember, La Niña is the diva of drought,” he said. The last big El Niño ended in 1998, and as the above chart shows, what followed wasn’t pretty.

Correction: Due to a conversion error, the original version of this post mistakenly stated that the Central Valley had “surrendered … 811 million acre-feet of underground water since 1962.” The actual figure is 81.1 million acre-feet.