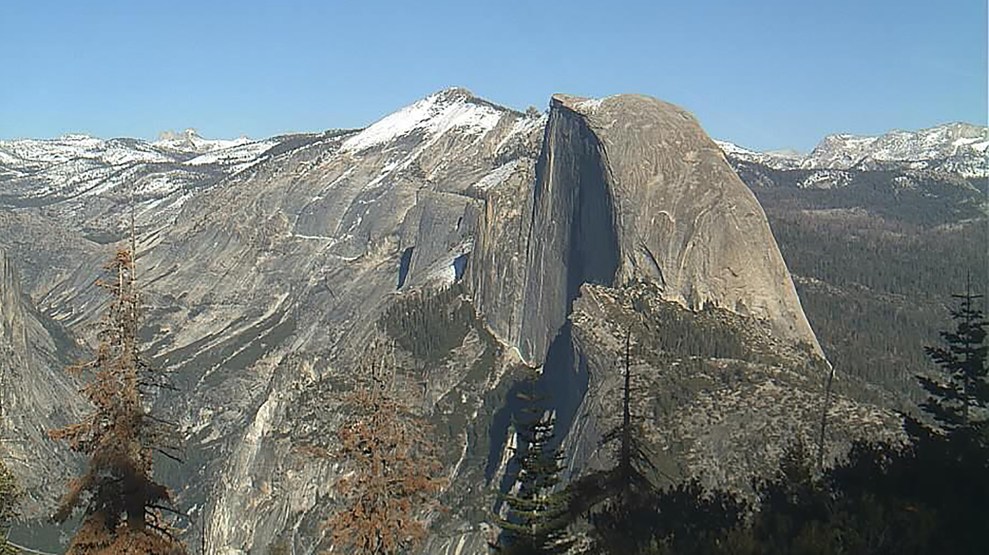 A snapshot from a webcam pointed at the High Sierra range, taken Feb. 7, 2018. Webcam still/Yosemite Conservancy

Remember the California drought? It ended last year, drowned under the deluges of the state’s wettest winter in nearly a century. Just as suddenly, dry times may be back.

The Sierra Nevada snowpack is the main irrigation source for the Central Valley, the farming region that supplies about a quarter of the US food supply.

That’s the message of the state’s latest official assessment of the Sierra Nevada snowpack, which stands at just 24 percent of its long-term average. The winter snow that accumulates in the long mountain range that straddles California’s eastern border counts as one of the United States’ most important water resources. When it melts in the spring, it’s shunted into an elaborate network of canals and aqueducts to cities and farms, accounting for about a third of our most populous state’s total water. And it’s the main irrigation source for the Central Valley, the farming region that supplies about a quarter of the US food supply, including roughly 40 percent of all fruits, nuts, and vegetables we consume.

The snowy season lasts until the end of March, so the pack could yet grow to normal levels. But February is the key month. “Every week that we don’t reverse this trend from here forward, it’s going to be that much harder to get to where we want to be by the end of the season,” UCLA climate scientist Daniel Swain told the San Jose Mercury News. The newspaper had more bad news: “Ominously, the forecast for the next two weeks calls for more hot weather across the state, with almost no chance of rain or snow.”

Severe droughts are becoming more frequent in California—and climate change is a likely catalyst. If the state enters another multi-year drought, it will mark the fourth one since 2000, according to the US Geological Survey. In the entire 20th century, only three such dry patches occurred, USGS notes. While no weather event can be tied directly to climate change, “anthropogenic warming has substantially increased the overall likelihood of extreme California droughts,” a 2015 paper by Columbia University researchers found.

When drought hits, the state and federal water authorities who manage the Sierra Nevada snow melt are typically forced to slash water deliveries to Central Valley farmers. Given that the great swaths of the region are so arid they count as desert, you might expect that short water supplies might mean abandoned fields, reduced harvests, and a big bump to your grocery bill.

But that’s not how it works. During the severe drought that officially ended last year, water deliveries were sharply reduced, falling to zero for many farmers in 2014 and 2015. The shortfall led to some fallowing, but for the most part, the mighty Central Valley agricultural behemoth lurched on, churning out vegetables, fruit, and nuts more or less as usual. While you might have read alarming articles about the water-sucking nature of almonds, you probably didn’t take much of a hit to the wallet or encounter empty shelves in the produce aisle.

That’s because Central Valley farmers, who produce 80 percent of the world’s almonds, have a supplemental water source: the underground aquifers that have accumulated water over millennia.

The 2012-2016 drought triggered a massive water-pumping boom. And as this eye-popping 2015 US Geological Survey study shows, that recent draw-down is part of a decades-long trend. In short, farmers are leaning ever harder on the valley’s vanishing aquifers to provide you with the bounty you’ve come to expect.

In a large swath of the Central Valley, the ground in literally sinking, by as much two feet per year in some parts.

The problem is, aquifer recharge during wet years never fully replaces all that was taken away during dry times—meaning that the Central Valley has surrendered a total of 100 cubic kilometers, or 81.1 million acre-feet, of underground water since 1962. (An acre-foot is the volume needed to cover an acre of land with a foot of water). That’s an average of about 1.5 million acre-feet of water annually that was extracted from finite underground reserves and not replaced during wet years. By comparison, all of Los Angeles uses about 600,000 acre-feet of water per year.

As the water disappears, it leaves a void underground. As a result, in a large swath of the Valley, the ground in literally sinking, by as much two feet per year in some parts. This subsidence, as it’s known, wreaks havoc on the area’s infrastructure, like its roads and bridges. It’s difficult to put a dollar value on such damage, because the “gradual nature of the impacts” means that “costs will often be covered as part of normal operations and maintenance,” according to California Department of Water Resources. But it likely costs taxpayers billions of dollars over the long term, as this 2015 Associated Press piece shows.

Subsidence also snarls up the very aqueducts that carry snowmelt from the mountains to farms. Once such example is the Friant-Kern Canal, a 152-mile structure that delivers irrigation water to the ag-heavy, arid counties of the southern Central Valley. According to the Friant Water Authority, the agency that manages the waterway, a crucial part of it sank 5 inches between April and November 2017, adding to a three-foot drop in recent years. The canal moves water by gravity, and subsidence creates pools that impede water flow by 60 percent, the trade journal Western Farm Press reports. This reduction, of course, spurs the affected farms to revert to aquifer-sucking wells to replace the missing water, compounding the subsidence problem. The cost for returning the canal to full capacity will likely reach $350 million, according to Western Farm Press.

While US eaters won’t likely feel a pinch from California’s water woes anytime in the next couple of years, things could change fast. Back in 2014, California ended a long history of wild-west management of underground water resources by enacting legislation that requires the state’s distressed water basins—including large chunks of the Central Valley—to come into balance by 2040, meaning water extractions won’t be allowed to exceed the replenishment rate. So the farmers that feed us are caught in a squeeze. They’ll have to rely much less on pumped water even as ever more frequent droughts cut into their other irrigation lifeline: the Sierra Nevada snowpack.