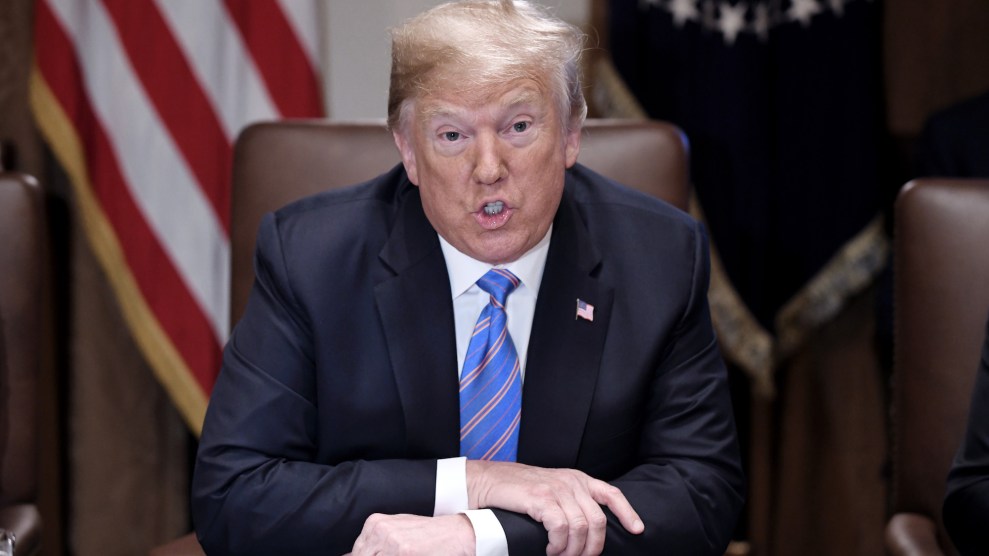 President Donald Trump has mounted a one-man offensive against the United States’ biggest trading partners in recent days, threatening to ramp up his tariff program to include all nearly all imports from China and insisting on Twitter that “Tariffs are the greatest!”

But on Tuesday, his administration crouched into a defensive stance. In a press release, the US Department of Agriculture announced it would spend up to $12 billion to “assist agricultural producers to meet the costs of disrupted markets.” (USDA Secretary Sonny Perdue has been hinting such a move was in the works for at least a month.) The spending is meant to protect the sector of the economy most vulnerable to the global trade hostilities: large-scale farmers of commodities like soybeans, corn, pork, and almonds. These crops are grown on such a grand scale that they require massive foreign markets to be profitable—and their biggest buyers are the very countries now slapping retaliatory tariffs on US goods.

Rather than applaud Trump’s apparent efforts to mollify them, many farm-state GOP legislators went into open revolt, calling for an end to the trade war instead of government checks. Sen. Ben Sasse (R.-Neb) summed up the mood: “America’s farmers don’t want to be paid to lose—they want to win by feeding the world,” he said in a statement.

Sen @BenSasse: “This trade war is cutting the legs out from under farmers and White House’s ‘plan’ is to spend $12 billion on gold crutches.” pic.twitter.com/qzUpviCJWo

So where is Trump going to get $12 billion for this program? Aside from its protectionist stance on trade, his administration has hewed to a laissez faire agenda of slashing taxes, regulation, and social spending. To finance the tariff reimbursement program, Trump and company plan to revert to a USDA agency launched during the Great Depression to stabilize crop prices for farmers. The Commodity Credit Corporation, as it’s known, will make use of a stipulation in its charter allowing it to borrow up to $30 billion from the US Treasury and hand it to farmers.

The new program has three prongs, according to the press release. One will provide direct payments to producers of soybeans, sorghum, corn, wheat, cotton, dairy, and hogs, the high-dollar crops most affected by the trade war; details on how exactly it will work—like how a farmer would qualify for a payment—won’t be release until after Labor Day, reports Politico’s Adam Behsudi in a pay-walled article. Another will “purchase unexpected surplus of affected commodities such as fruits, nuts, rice, legumes, beef, pork and milk for distribution to food banks and other nutrition programs”; and the third will work “with the private sector to assist in developing new export markets for our farm products.” That last one is somewhat ironic, given that the president has launched trade battles with the top four recipients of US ag goods: Canada, China, Mexico, and the European Union.

The timing of the announcement came as a surprise, said Ferd Hoefner, senior strategic advisor for the National Sustainable Agriculture Coalition, because “they obviously haven’t had time to work out the details.” He noted that Congress’ annual summer recess begins Thursday. No farm-state Republican senator or representative “wants to go home for the month of August and face questions without having something in their back pocket…now they’ll have something to talk about when they get badgered by farmers at each town hall about why their markets are being taken away,” he said.

“Now they’ll have something to talk about when they get badgered by farmers at each town hall about why their markets are being taken away.”

The Big Ag lobby, meanwhile, is not impressed. Farmers for Free Trade, an advocacy organization funded by the pesticide trade group Croplife America and the American Farm Bureau, among others, issued two statements Tuesday lambasting Trump’s trade machinations. “Most farmers in Trump country don’t think tariffs are ‘the greatest,'” read one. “Crops don’t grow overnight. Farmers and producers need time and long-term certainty to do their jobs, not constant chaos created by haphazard trade policy.” The other dismissed the new $12 billion program as a “short-term attempt at masking the long-term damage caused by tariffs.”

Other food producers who evidently aren’t covered by the program are complaining, too. Here’s Helena Bottemiller, one of the Politico reporters who broke the story Tuesday morning, hours before the USDA’s press release:

Getting *a lot* of responses like this: Wait, what about my industry? 🦞 https://t.co/quSAA53y4J

For farmers who do benefit from payouts, Hoefner thinks, the program might serve its purpose of at least temporarily “salving the wounds” of the trade war being incurred in the heart of Trump country and shore up the president’s standing there ahead of the fall midterm elections.”People are really hurting,” he said, and handing them money isn’t a terrible way to maintain their support. “Everybody has their talking point about how, ‘we don’t want aid, we want trade,'” he said. But at the individual farmer level, the promise of a check that will help them through the next planting season “might make a difference.”