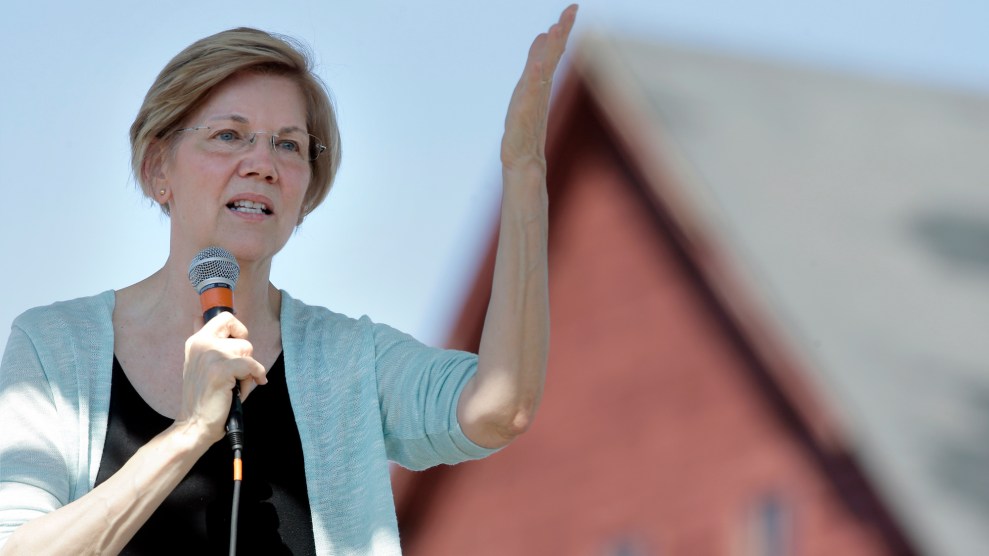 Food and farm policy rarely plays a major role in US presidential elections. But Democratic hopefuls Elizabeth Warren and Bernie Sanders may be about to change that.

In a Medium post published Wednesday, Warren laid out a populist plan to shake up the American system of food production. As I have been writing for years, the companies that sell farmers seeds, chemicals, and tractors have been consolidating into fewer and ever more massive entities. So have the firms that buy farmers’ goods, such as grain traders, meat companies, and supermarkets. Farmers, meanwhile, have seen the prices they receive for their products—and their profits—wither away.

These are bold stands—especially given that Hillary Clinton raised more agribusiness cash than Donald Trump in 2016.

“It all starts with attacking consolidation in the agriculture sector head on,” Warren declared. “We must give family farmers more options and more bargaining power in the marketplace so they can build more economic security.”

And she put some bold specifics behind that rhetoric. “I will appoint trustbusters to review—and reverse—anti-competitive mergers,” she vowed, specifically name-checking German chemical giant Bayer’s $66 billion takeover of US seed/pesticide giant Monsanto, which was approved by US antitrust authorities last year.

She also issued a warning to the meat industry, whose reliance on tying farmers into punishing contracts and government-backed debt I laid out here. Meat giants like Tyson and Smithfield are “vertically integrated“—meaning they both slaughter livestock and tightly control the process for raising them, pushing the economic risks of production onto farmers while grabbing most of the profit.

No more, says Warren. “My administration will bring vertical integration cases to break up integrated agribusinesses,” she wrote. She added that “contract chicken farming has already squeezed farmers to the breaking point. To stop the spread of that practice, I believe we should prohibit abusive contract farming in the livestock sector.”

She even invoked the Gilded Age populist firebrand William Jennings Bryan, quoting from his famous Cross of Gold speech: “The farmer who goes forth in the morning and toils all day, begins in the spring and toils all summer, and by the application of brain and muscles to the natural resources of this country creates wealth, is as much a businessman as the man who goes upon the Board of Trade and bets upon the price of grain.”

Sanders, for his part, published an op-ed in the Des Moines Register Thursday making a similar case, although with fewer specific promises. He, too, denounced Bayer’s Monsanto buyout, adding that “when we are in the White House, we are going to strengthen antitrust laws that defend farmers from the corporate middlemen that stand between the food grower and the consumer, and have now become so big and powerful that they can squeeze farmers for everything they’re worth.”

These are bold stands—especially given that the 2016 Democratic nominee, Hillary Clinton, raised more agribusiness cash than Donald Trump during the campaign. Back in 2014, Clinton earned a $335,000 fee for speaking before the Biotechnology Industry Organization, a trade group representing the seed industry.

Such coziness likely won’t play well in 2020. On Saturday Warren is participating in a Democratic candidate’s forum in Storm Lake, Iowa, put on by the Open Markets Institute, a DC think tank that has probably done more than any entity to raise awareness of the ill effects of hyper-consolidation—both in the larger economy and in ag markets, specifically.

Other Democrats participating in the Open Markets event include former US Housing and Urban Development Secretary Julián Castro, Sen. Amy Klobuchar (Minn.), former Rep. John Delaney (Md.), and Rep. Tim Ryan (Ohio), who has not yet announced whether he will run for president. The main interviewer will be Art Cullen, the editor of the Storm Lake Times, who won the 2017 Pulitzer Prize in editorial writing for calling out Big Ag for its role in Iowa’s burgeoning water-pollution crisis.

It’s likely that other Democratic candidates will now follow Warren and Sanders’ lead. Before he threw his hat into the ring, Sen. Cory Booker (N.J.) signaled his interest in the issue by sponsoring a bill that would temporarily ban mergers and acquisitions between large farm, food, and grocery companies, and would set up a commission to strengthen antitrust enforcement in the agribusiness industry.

For the first time in my lifetime, agricultural policy may yet emerge as a driving issue in the next presidential race—or at the very least in the Democratic primary.