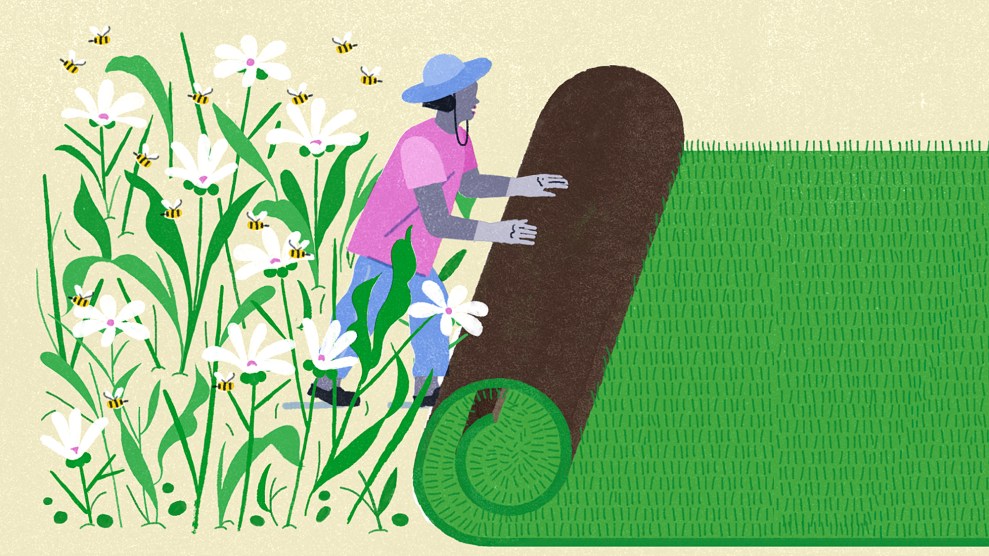 Since the post–World War II rise of suburbia, the great American lawn has beckoned with the promise of a grassy, orderly Eden surrounding a single-family fortress. For just as long, lawns have been sending bees and other pollinating critters the opposite message: Buzz off.

That’s because the very essence of a lawn (closely shorn, uniform, weed-free) leaves little room for the sustenance that pollinators depend on—pollen and nectar from a variety of flowers. Residential landscaping contributes to an alarming ecological crisis: a steep decline in the health of pollinating animals, whose services provide one-third of the food we eat. They don’t just power the supermarket produce aisle; pollinators keep forests, parks, and shrublands humming.

The most famous troubled pollinators are bees. In five out of the past seven years, US beekeepers lost at least 40 percent of their colonies, forcing them to scramble to create new hives. Unlike the nonnative honeybee that commercial beekeepers rely on, wild bees, which do the bulk of noncommercial pollinating, don’t have the luxury of human management. Twenty years ago, the rusty patched bumblebee whizzed from flower to flower in 28 states. But its population has plunged by 87 percent, making it the first bumblebee to be listed under the Endangered Species Act. A 2017 report from the Center for Biological Diversity showed that among 1,437 bee species native to North America and Hawaii, nearly a quarter are at risk of extinction.

Nearly a quarter of the 1,437 bee species native to North America and Hawaii are at risk of extinction.

“Bees are dying from a thousand cuts,” says Marla Spivak, professor of entomology at the University of Minnesota.  Those include parasites, fungal diseases, pesticides, and poor nutrition linked to the disappearance of essential flowers on huge swaths of the landscape. As if such threats weren’t enough, a new menace looms on the horizon: The Asian giant hornet, a species native to eastern and southeast Asia, has been spotted in Washington State. Nicknamed “murder hornets,” these two-inch-long creatures target honey bee hives, “killing adult bees and devouring bee larvae and pupae, while aggressively defending the occupied colony,” reports a University of Washington press release.

Meanwhile, corn and soybean fields, which cover an area almost twice the size of California, provide little nourishment to honeybees and other pollinators. Farmers shower these crops with pollinator-harming insecticides and fungicides, as well as herbicides that wipe out flowering plants.

Rather than provide a respite from the pollinator dystopia found on industrial farms, our lawns mimic it. America’s lawns cover about 40 million acres, an area roughly equal in size to the state of Wisconsin. Altogether, domestic landscaping sucks up 9 billion gallons of water a day, making ornamental grass by far our biggest irrigated crop. To attain­ a perfect green patch, turf enthusiasts often revert to a chemical cocktail as toxic as the one used by commercial farmers.

America’s lawns and gardens suck up 9 billion gallons of water a day.

Spivak offers a new vision for the lawn: still cut pretty close to the ground, but shot through with a plethora of colorful, bee-enticing flowers, like ground plum and lanceleaf tickseed. “We’re not talking about ‘letting grass go,’ which would mean encouraging weedy species,” she says. “We’re talking about intentionally seeding flowering species into turf to diversify the landscape and still maintain the manicured lawn look that so many people like”—and that homeowners associations often require.

At her Bee Lab, Spivak spearheaded a project to see whether sowing flowers with short stalks into turfgrass would turn lawns into bee magnets. Researcher James Wolfin found interplanting turfgrasses with Dutch white clover, self-heal, and creeping thyme drew in 61 bee species; grass-only plots attracted none. (More information on bee lawns here, here, and here.) Another benefit of a pollinator-friendly lawn: It needs just two or three trims during the warm months.

In Great Britain, the coronavirus lockdown has inadvertently put a version of Spivak’s idea into action by halting much of the usual spring mowing of the nation’s roadsides, home to 700 species of wildflowers, nearly 45 percent of the UK’s total flora, the Guardian reported. Conservationists from the charity Plantlife told reporters that reducing the trimming would be a boon for pollinators and could save money and mean fewer greenhouse gas emissions.”We need to rewild ourselves,” one of them urged, “and accept nature’s wonderful ‘messiness.'”

Even before the coronavirus encouraged a lax stance on landscaping, Minnesota’s Board of Water and Soil Resources, alarmed by pollinator declines, launched a three-year, $900,000 pilot program offering to reimburse people up to $350 if they are willing to add bee-friendly plants to their home turf. The response has been “overwhelmingly positive,” with more than 5,000 applications, says Mary Juhl, the agency’s communications coordinator.

Farms with 10 percent of their land devoted to “prairie strips” led to a three-and-a-half-fold increase in the number of pollinators.

The same logic applies to farmland. Farms with just 10 percent of their land devoted to flower-rich “prairie strips” experience a three-and-a-half-fold increase in the number of pollinators, Iowa State University researchers found. The US Department of Agriculture provides funding for some commodity farmers to replace slivers of their cropland with native-prairie vegetation.

For nearly as long as they’ve been popular, lawns have served as a totem of middle-class vulgarity, conformity, and excess. In her landmark 1962 book Silent Spring, Rachel Carson denounced the wanton use of lawn pesticides. Carson’s contemporary, activist Lorrie Otto, condemned yards as “sterile” and “flagrantly wasteful.” Polemics as cutting as a mower’s blade have proliferated in the decades since, but lawns abide. Spivak and her team come not to bury them, but to adapt them to the insects vital to the entire ecosystem—and our food supply.