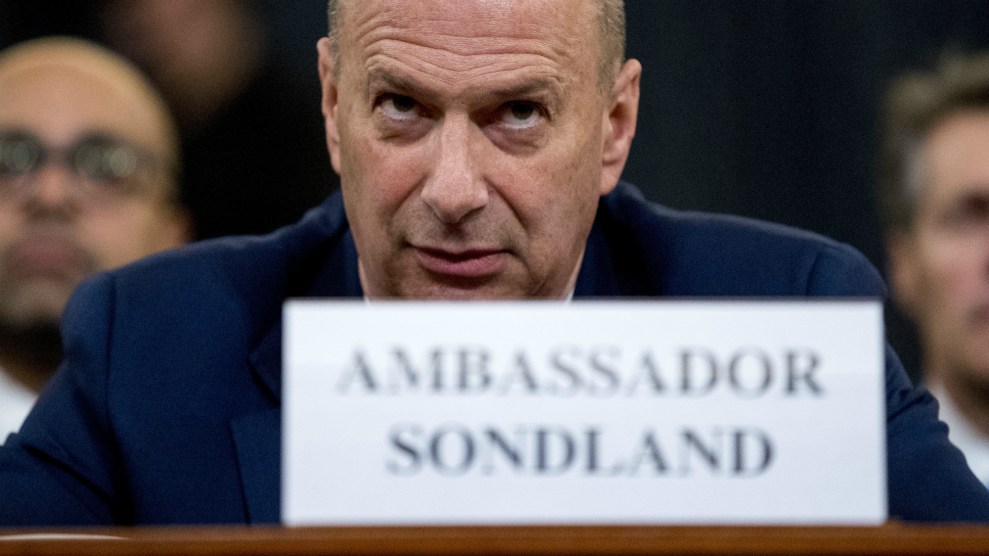 Dear God, can we please ban the phrase “quid pro quo”? If you’ve watched any of the impeachment hearings so far, you’ve been subjected to this expression; yesterday it was used, by one count, nearly 70 times. The phrase at the center of the Ukraine scandal is simple, meaning “something for something”—say, aid for a foreign country like Ukraine in exchange for that government investigating the opponents of US President Donald Trump. But it isn’t a legal charge of a crime—or English. But even so, it’s become something of a false test in this winding impeachment journey, much like collusion was during the Russia investigation. As our own David Corn has written, “The game plan for Trump and his gang, once again, is to distract from Trump’s clear-and-present wrongdoing by asserting he didn’t actually do something worse, such as break the law.”

Seeming to recognize how the phrase is both confusing and muddying, Democrats have attempted to switch away from the Latin phrase to “bribery,” which has led Republicans to crow that Democrats are backing down from their initial allegations. (Synonyms are hard!)

How did this become the thing? And most importantly: Who can we blame for this?

And yet! the phrase persists.

So I wondered: Who first began using the term to discuss Trump and Ukraine? How did this become the thing? And most importantly: Who can we blame for this?

Spoiler alert: I went down and down the rabbit hole and there is no clear answer. Or, more accurately, there seem to be a few possible answers.

Let’s first talk about its use in public conversation. According to our search of Nexis’ news archive, the first use of “quid pro quo” in relation to the larger Ukraine scandal popped up on September 19—about a week before the whistleblower’s complaint was made public, but after Congress knew about it, and when reports were swirling about its existence. In an interview on CNN, Rudolph Giuliani, former mayor of New York City and current horrific lawyer to the president, brought up the widely dismissed claim that former Vice President Joe Biden abused his power to help his son in Ukraine. Host Chris Cuomo pressed Giuliani on whether he could prove “it was quid pro quo,” referencing Biden’s behavior, not Trump’s, in this instance. (The conversation then devolved into the two speaking over one another.) On another CNN spot the same day, national security reporter Samantha Vinograd was asked about the whistleblower complaint and said, “what we’re seeing is some kind of quid pro quo potentially play out,” in reference to Trump’s potential actions.

Also that same day, on MSNBC’s The Last Word with Lawrence O’Donnell, security expert Ned Price was talking about the whistleblower report and explained it “raises the prospect” that “what we’re really talking about is a quid pro quo,” again in reference to the president.

Over the next few days it began to splash across national newspapers, often in the context of off-the-record conversations about the whistleblower report.

Just days before the complaint became public, the Washington Post said on September 20, “one source familiar with the contents of the [July 25] phone call said Trump did not raise the issue of American military and intelligence aid that the administration was at the time withholding from Ukraine—indicating that there may not have been an explicit quid pro quo expressed in the call.” Also on the 20th, the New York Times noted that according to unnamed Democrats, “the key question is whether Mr. Trump was demanding a quid pro quo, explicitly or implicitly.” The next day, on the 21st, the Wall Street Journal confirmed with an unnamed Ukrainian official that, “Mr. Trump in the call didn’t mention a provision of U.S. aid to Ukraine, said this person, who didn’t believe Mr. Trump offered the Ukrainian president any quid pro quo for his cooperation on any investigation.”

The 21st is also the day Giuliani seems to have publicly picked it up, now using it to refer his boss:

Whistleblower story, like Kavanaugh story, is blowing up. Now no mention of money or quid pro quo. So appropriate conduct. Now we must look at Biden Family pattern of corruption of selling his public offices for 5 decades. Pattern of corruption enabled by Swamp.

The president soon followed his lead. When Trump announced he was releasing the transcript of his call with Ukrainian Volodymyr Zelensky a few days later, he claimed “NO quid pro quo!” for himself, “unlike Joe Biden and his son.”

….You will see it was a very friendly and totally appropriate call. No pressure and, unlike Joe Biden and his son, NO quid pro quo! This is nothing more than a continuation of the Greatest and most Destructive Witch Hunt of all time!

From there, quid pro quo blossomed into a behemoth. A crucial point was its usage in mid-October when acting White House Chief of Staff Mick Mulvaney admitted to a quid pro quo. Its fate was sealed.

We do know definitively that officials in the Trump administration—including many of those at the center of the impeachment inquiry—were using the phrase long before the media.

But let’s back up. Could this have entered the media vernacular because the unnamed sources were already using it? Maybe! We can’t really know. But we do know definitively that officials in the Trump administration—including many of those at the center of the impeachment inquiry—were using the phrase long before the media did to describe the Trump administration withholding security assistance and a White House visit in exchange for political investigations.

On September 7, two days before Congress learned about the whistleblower complaint, it seems to have come up in conversation between Bill Taylor, the top US diplomat to Ukraine, and Tim Morrison, a former top National Security Council official. As Taylor described in his congressional testimony:

Then again, it comes up the next day:

Presumably, these are direct quotes, though second hand.

It was definitely used again the following day, on September 9, by Ambassador to the EU Gordon Sondland, according to text messages between Taylor and Sondland.

“I think it’s crazy to withhold security assistance for help with a political campaign,” Taylor texted.

Sondland replied, the “President has been crystal clear no quid pro quo’s [sic] of any kind.”

(Remember: This was the same day that the IG reported to Congress the existence of the whistleblower complaint.)

But this all still doesn’t answer the question: How the hell did Trump come up with this phrase?

In fact, both Rep. Val Demings (D-Fla.) and Rep. Raja Krishnamoorthi (D-Ill.) ended up with a similar question yesterday:

Under questioning from @CongressmanRaja, Sondland admits he can't rule out that Trump said he wanted nothing from Ukraine during their September 9 phone call simply because the whistleblower complaint was about to blow the lid off the whole scheme pic.twitter.com/kULQHj1OmS

The lawmakers suggest Trump starting using it as an attempt to cover his tracks. Still, my suspicion is that Trump first heard the phrase in a phone call before all this, one as far back as late August from Sen. Ron Johnson (R-Wisc.). In an October interview with the Wall Street Journal, Johnson said that month Sondland had “described to him a quid pro quo involving a commitment by Kyiv to probe matters related to U.S. elections and the status of nearly $400 million in U.S. aid to Ukraine that the president had ordered to be held up in July.” So, according to the Journal, Johnson said he called Trump directly:

Sen. Ron Johnson said that Gordon Sondland, the U.S. ambassador to the European Union, had described to him a quid pro quo involving a commitment by Kyiv to probe matters related to U.S. elections and the status of nearly $400 million in U.S. aid to Ukraine that the president had ordered to be held up in July.

Alarmed by that information, Mr. Johnson, who supports aid to Ukraine and is the chairman of a Senate subcommittee with jurisdiction over the region, said he raised the issue with Mr. Trump the next day, Aug. 31, in a phone call, days before the senator was to meet with Ukraine’s president, Volodymyr Zelensky. In the call, Mr. Trump flatly rejected the notion that he directed aides to make military aid to Ukraine contingent on a new probe by Kyiv, Mr. Johnson said.

“He said, ‘Expletive deleted—No way. I would never do that. Who told you that?” the Wisconsin senator recalled in an interview Friday. Mr. Johnson said he told the president he had learned of the arrangement from Mr. Sondland.

Given this use of quid pro quo isn’t in direct quotes, it’s just my suspicion that this is where the phrase entered Trump’s lexicon and started to ruin our lives, presumably traveling from Sondland to Johnson to Trump. At the very least, it seems to have been in use by Sondland in early September, and very likely could have been used in his conversations with Trump.

So, in our very non-scientific query, let’s blame Sondland?

If there is some point in time you remember that I am missing, please, for the love of God, help us all get to the bottom of it. (I look forward to your crazed emails.)