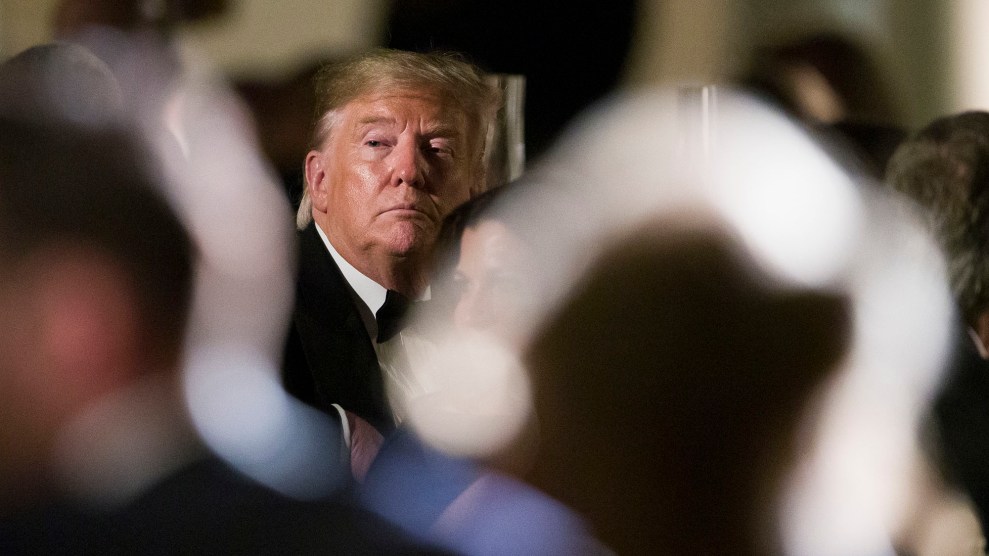 At the start of Thursday’s impeachment hearing, former Trump national security official Fiona Hill took a thinly veiled shot at Republicans. “Based on questions and statements I have heard, some of you on this committee appear to believe that Russia and its security services did not conduct a campaign against our country—and that perhaps, somehow, for some reason, Ukraine did,” she said. “This is a fictional narrative that has been perpetrated and propagated by the Russian security services themselves.”

Donald Trump, it seems, wasn’t paying attention. This morning, the president phoned into Fox & Friends for an hour-long interview in which he once again repeated his long-debunked “CrowdStrike” conspiracy theory. This is the same nutty theory that Trump pressured Ukrainian President Volodymyr Zelensky to look into during the infamous July 25 call. And it’s the same theory that Trump wanted investigated in return for releasing the hold on military aid to Ukraine, according to acting White House chief of staff Mick Mulvaney. (Mulvaney later attempted to un-say this.)

On Fox & Friends, President Trump promotes the completely debunked Crowdstrike conspiracy theory about Ukraine. Steve Doocy asks if he is sure that's what happened, and Trump replies "that's what the word is," going on to ramble about other countries not "putting up money." pic.twitter.com/uGXZ4tMBic

The CrowdStrike nonsense is an elaborate conspiracy theory, but at its core, it holds that the Russian hack of Democratic National Committee emails in 2016 was actually a hoax and that Ukrainians were somehow involved. As David Corn explained:

Immediately after the Democratic National Committee in June 2016 revealed that its computer servers had been infiltrated and that a cybersecurity company called CrowdStrike had determined the hackers were Russian operatives, right-wing websites and chat groups began challenging this idea and promoting other scenarios. They focused on CrowdStrike, and eventually the theory emerged that the DNC was not infiltrated by the Russians and that CrowdStrike had moved the servers (which held the proof!) to Ukraine to prevent the FBI from inspecting them and learning the truth. (This theory overlapped with the debunked conspiracy theory that a young DNC staffer named Seth Rich, not Russia, had obtained the purloined DNC emails and passed them to WikiLeaks. Rich was murdered in an attempted robbery in Washington.) On 4chan and Reddit, Trump devotees advanced this idea that the DNC and CrowdStrike had fabricated the Russian attack. And, not surprisingly, Russian media outlets spread the tale. (BuzzFeed News has detailed this transmission belt of skulduggery.) So there was Trump echoing Russian propaganda and telling Zelensky, “I would like you to find out what happened with this whole situation with CrowdStrike, they say CrowdStrike…I guess you have one of your wealthy people. The server, they say Ukraine has it.”

Of course, in the real world the facts were established by the Mueller probe, two congressional investigations (led by Republicans), and an investigation conducted by the intelligence community: Russia hacked the DNC to steal information it could use in its covert campaign to subvert the 2016 election.

“Well, that’s what the word is,” the president responded.