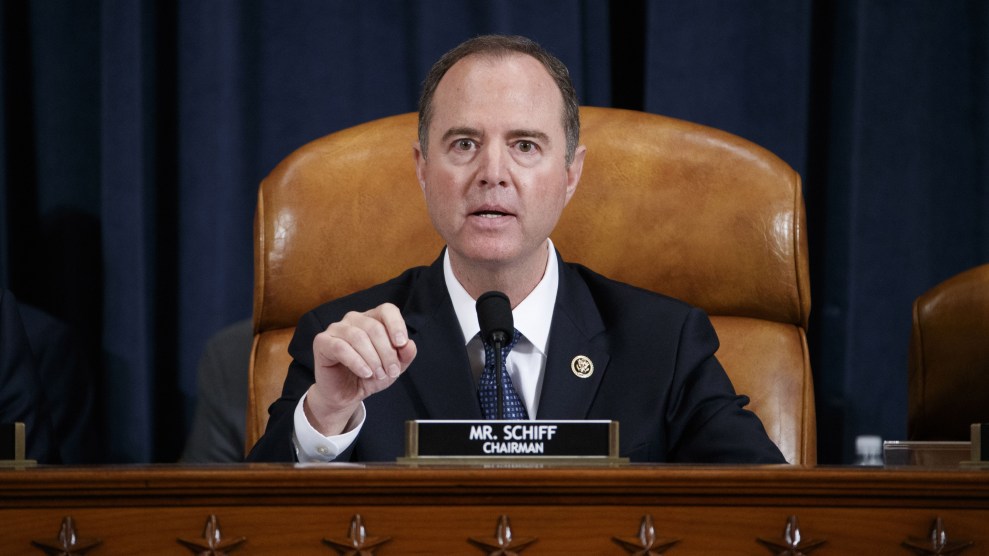 In a fiery statement bringing Thursday’s impeachment hearings to a close, House Intelligence Committee chair Adam Schiff explained the gravity of the accusations against President Donald Trump and dismantled the Republican argument against impeachment. Where his Republican counterpart Devin Nunes resorted to bluster and a bit of Founding Father necrophilia, Schiff was clinical and incisive. In a matter of 20 minutes, he laid out both a straightforward case for impeaching the president and a comprehensive picture of GOP denial.

Schiff began by repudiating Republicans’ cries of a “Russia hoax,” reminding views that Russia did indeed interfere with the 2016 presidential election. “We all remember that debacle in Helsinki, when the president stood next to Vladimir Putin and questioned his own intelligence agencies,” he said, bristling. “But of course, they were silent when the president said that.”

.@RepAdamSchiff recalls when Trump stood next to Putin and attacked US intelligence agencies who determined Russia interfered in the 2016 election: "I wish I had heard just some of the righteous indignation we heard in the committee today … but of course they were silent!" pic.twitter.com/R64tOnLnrt

Schiff took pains to clarify the geopolitical stakes underlying Ukraine President Volodymyr Zelensky’s communications with Trump. Zelensky needed Trump as an ally in his nation’s war against Russia. He was entering a negotiation with its president, Vladimir Putin, over how to end the conflict, and the prospect of Trump’s support was a large part of the leverage he needed.

“Whether [Zelensky] has good leverage or lousy leverage depends on whether the Russians think he has a relationship with the president, and the president wouldn’t give him that, not without getting something in return,” Schiff said. “And that return was investigations of his rival that would help his reelection.”

.@RepAdamSchiff: “The interest, of course, was in an investigation of Donald Trump’s rival, the one that he apparently feared the most. And they were willing to do whatever was necessary to get Ukraine to do that dirty work, to do that political investigation.” pic.twitter.com/yVcdS1TS0z

Then, questioning his colleagues’ grasp of legal procedure, Schiff called accusations that all evidence was hearsay “absurd.”

“After all, you’re relating what you heard and you’re saying it, so it must be hearsay,” Schiff said, mimicking the Republican members of the committee. “Therefore, we don’t really have to think about it, do we? Well, if that were true, you could never present any evidence in court unless the jury was also in the Ward Room.”

.@RepAdamSchiff: “[The Republicans'] defense is, ‘It’s all hearsay…Because we’re not in the room, it’s all hearsay.’ …Well if that were true, you could never present any evidence in court unless the jury was also in the Ward Room. That’s absurd.” pic.twitter.com/LPdeepwF6V

And in any case, Trump is implicated by his own words, as written in the memo of the July 25 phone call. Per the Republican argument, Schiff said, “We should imagine that he said something about actually fighting corruption, instead of what he actually said, which was, ‘I want you to do us a favor, though.'”

Said Schiff: “When the founders provided a mechanism in the Constitution for impeachment, they were worried about what might happen if someone unethical took the highest office in the land and used it for their personal gain and not because of deep care about the big things that should matter.” Though Schiff resisted impeachment for a long time, Trump’s request for China to investigate the Bidens pushed him over the edge, he said. “The president believes he is above the law, beyond accountability,” he concluded. “And in my view, there is nothing more dangerous than an unethical president who believes they are above the law.”

Schiff: "The day after [Mueller testified], Donald Trump is back on the phone, asking another nation to involve itself in another US election. That says to me, this president believes he is above the law—beyond accountability. And in my view, there is nothing more dangerous.” pic.twitter.com/nCjCkqdGot