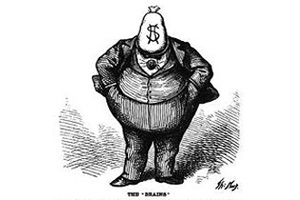 Matt Yglesias isn’t buying my story that skyrocketing Wall Street earnings—and the skyrocketing incomes of the super-rich in general—are basically coming out of the pockets of the working and middle classes:

….Here’s another story. A lot of the median wage earner’s money has been hoovered up by the health care system. If we had single payer health insurance in the United States then increases in per capita health care spending would exhibit themselves as higher taxes….The last part of my story is monetary policy. It used to be the case that monetary policy errors were two-sided. Sometimes wages grew too fast (inflation) and sometimes they grew too slowly (recession), but since 1980 we’ve only ever erred in one direction and experienced three labor market recessions and zero outbursts of inflation.

As it happens, swelling health care benefits aren’t enough to account for more than a small amount of middle class income stagnation over the past three decades. The arithmetic just doesn’t work out. But Matt is right that the weakest part of my story is coming up with a good causal account of how the top 1% sucked up so much money from the middle classes. But I think it’s a mistake to get overly wonky and look for some kind of geometric proof of how this happened. You’re just never going to get that. You’re never going to be able to point to a specific policy at time X that caused a specific transfer of income share at time Y.

As another blogger put it, “It’s as if the major banks have tapped a hole in the social till and they are drinking from it with a straw.” Except it’s not just the banks. It’s their super-rich clients, too.

Still, I don’t think that a plausible story of causation is really all that hard. First, take a look at middle class income stagnation. What caused that? Matt already pointed to one cause: monetary policy since the late 70s that’s kept inflation low at the cost of keeping labor markets persistently loose. To that, I’d add several other trends that have marked the past three decades: trade policies that accelerated the decline of U.S. manufacturing; domestic deregulation policies that squeezed workers; stagnation in the minimum wage; immigration policies that reduced wages at the low end; and a 30-year war against labor that devastated unions and reduced the bargaining power of the working class.

On the merits, you can argue for or against any of these individual policies. But there’s very little question that collectively they are (a) policies strongly promoted by business interests and the rich, and (b) they suppressed middle class wages. Note that a few of these policies are global in nature, which explains why some other advanced countries also saw a certain amount of middle-class wage stagnation, but that all of them were promoted very aggressively in America, which explains why we saw more of it than most countries.

Now, if these policies hadn’t been in place, middle class wages would likely have grown at about the same rate as the overall economy—just as they did in the postwar era. But they didn’t, and that meant that every year the money that would have gone to middle class wage increases instead went somewhere else.

It was a vast and steadily growing pool of money, and the chart on the right gives you an idea of its size by 2005. It comes from Jacob Hacker and Paul Pierson, and it shows how much income would have gone to different groups if their income had grown at the same rate as the broad economy. The bottom 80% lost $743 billion by growing more slowly. The top 1% gained $673 billion by growing more quickly. That’s a pretty close match. And the upper middle class, in the 80th-99th percentile? They didn’t score the huge payoffs of the super rich, but they did fine, posting a net gain of $126 billion. In other words, the well off mostly don’t seem to have suffered at the hands of the super rich. Instead, the money gained by the top 1% seems to have come largely from the bottom 80%.

But what’s the mechanism? What are the policies that allowed this pool of money to flow into their hands? Again, you can point to several things. Just to name a few: reduced high-end marginal tax rates on income and capital gains; relentless financial deregulation; weak antitrust enforcement leading to industry consolidation; the emergence of high-speed trading profits available only to well-connected financial firms; crippling of the IRS’s ability to audit high earners; a persistent strong dollar policy; and the ability of the rich to make big financial bets backstopped by government bailouts. All of these are policies promoted largely by business interests and the rich.

There’s no indisputable smoking gun here. As I said, you’re just never going to get that. What we have, however, is still very, very suggestive. The argument goes like this. (1) For three decades we’ve had wage suppression in the middle classes, largely as a result of policies promoted by the rich. (2) Conversely, the well off in the 80th-99th percentile have mostly kept up. Their incomes haven’t skyrocketed, but they’ve done fine. This is important since political opposition from this class is generally pretty effective and probably would have derailed the entire project. (3) The aggregate pool of money lost by the working and middle classes is suggestively similar to the amount gained by the super-rich. (4) A wide variety of policies have coalesced that have allowed the super-rich to funnel this money in their own direction. As Tyler Cowen put it, “It’s as if the major banks have tapped a hole in the social till and they are drinking from it with a straw.” Except it’s not just the banks. It’s the banks and all their super-rich clients.