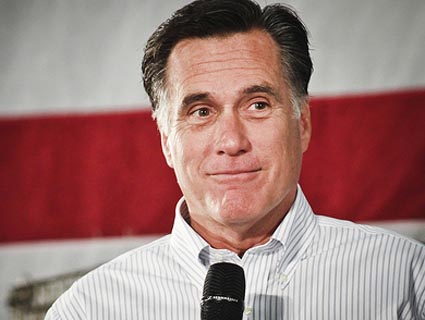 When it comes to immigration policy, Mitt Romney has decided that discretion is the better part of valor. In his speech before Latino business leaders at the Chamber of Commerce Wednesday, Romney decided to avoid the whole immigration issue altogether, HuffPo’s Elise Foley reports:

Romney’s 20-minute speech mentioned higher education, District of Columbia schools and teachers’ unions. Even though the address at the U.S. Chamber of Commerce was specifically for members of the Latino Coalition, he barely discussed Hispanic-specific education issues — other than a quick mention of former Republican Gov. Jeb Bush’s efforts to raise reading scores of Hispanic students — and entirely skipped undocumented students, whom a majority of Latino voters believe should get U.S. help in gaining legal status.

So what happened? Romney, after trashing his primary opponents from the right on immigration, and endorsing an immigration policy of “attrition through enforcement,” attempted an awkward pivot to the center once the primary was over. Romney promised to “study” a plan offered by Sen. Marco Rubio (R-Fla.) that would grant legal status to undocumented immigrants brought to the US as children. That didn’t go over well with the anti-immigrant wing of the Republican Party, most notably Romney adviser Kris Kobach, the Kansas secretary of state who helped write many of the nation’s harshest state immigration laws. As the Washington Post‘s Greg Sargent reported, Kobach called the Rubio plan “amnesty,” even though it wouldn’t actually grant citizenship to anyone.

“I’d absolutely reject any proposal that would give a path to legal status for illegal aliens en masse,” Kobach said. “That is what amnesty is. I do not expect [Romney] to propose or embrace amnesty.”

Romney spent an awkward few days trying to distance himself from Kobach, demoting him from adviser to “supporter.” Kobach nonchalantly told Think Progress that yes, he was still advising Romney on immigration, regardless of what the campaign itself was saying.

Although I’m sure immigration will come up again, the whole saga illustrates that the anti-immigrant wing of the Republican Party has Romney over a barrel. Romney can’t move to the center because he simply cannot defy them, they won’t let him.

Although Rubio, who spoke after Romney, mentioned his “DREAMless” Act in his speech Wednesday, an actual legislative proposal has been elusive. Romney’s retreat on this issue really opens up an opportunity for the Obama administration, which is reportedly skittish about Rubio’s plan. There’s really no reason for Obama not to endorse it if and when it comes out. Not only will it make it impossible for Romney to take the opportunity Rubio is offering him, but there’s little chance the legislation will pass because the GOP’s anti-immigrant base wants to deport every single undocumented immigrant in America, making the Rubio plan a non-starter. Politically, the worst case scenario for the administration is that the proposal passes, and a group of undocumented immigrants who are American in all but name and are here through no fault of their own avoid being kicked out of the country. So it’s not just politically smart—it’s the right thing to do.

Better yet for the administration, the people who voted for Obama expecting comprehensive immigration reform rather than more than a million deportations would have an actual reason to vote for Obama other than fear of a Republican president. Obama has a large lead over Romney among Latinos, but the ratio of the Latino vote that Obama gets is less important than the number of Latinos who would have voted Obama but stay home out of disappointment with the administration.