Last Wednesday, the Fed announced that it would not be tapering its bond buying program. This news was released at precisely 2 p.m. in Washington “as measured by the national atomic clock.” It takes seven milliseconds for this information to get to Chicago. However, several huge orders that were based on the Fed’s decision were placed on Chicago exchanges two to three milliseconds after 2 p.m. How did this happen?

CNBC has the story here, and the answer is: We don’t know. Reporters get the Fed release early, but they get it in a secure room and aren’t permitted to communicate with the outside world until precisely 2 p.m. Still, maybe someone figured out a way to game the embargo. It would certainly be worth a ton of money. Investigations are ongoing, but Neil Irwin has this to say: 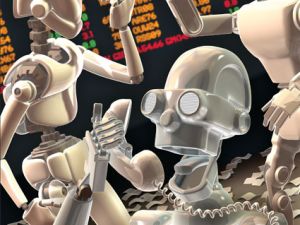 Also read: Is High-Speed Trading the Next Wall Street Disaster?

In the meantime, there’s another useful lesson out of the whole episode. It is the reality of how much trading activity, particularly of the ultra-high-frequency variety is really a dead weight loss for society.

…There is a role in [capital] markets for traders whose work is more speculative…But when taken to its logical extremes, such as computers exploiting five millisecond advantages in the transfer of market-moving information, it’s much less clear that society gains anything…In the high-frequency trading business, billions of dollars are spent on high-speed lines, programming talent, and advanced computers by funds looking to capitalize on the smallest and most fleeting of mispricings. Those are computing resources and insanely intelligent people who could instead be put to work making the Internet run faster for everyone, or figuring out how to distribute electricity more efficiently, or really anything other than trying to figure out how to trade gold futures on the latest Fed announcement faster than the speed of light.

Yep. I’m not sure what to do about it, though. A tiny transaction tax still seems like a workable solution, although there are several real-world issues with it. Worth a look, though.

In a related vein, let’s talk a bit more about this seven millisecond figure. That might very well be how long it takes a signal to travel from Washington, DC, to Chicago via a fiber-optic cable, but in fact the two cities are only 960 kilometers apart. At the speed of light, that’s 3.2 milliseconds. A straight line path would be a bit less, perhaps 3 milliseconds. So maybe someone has managed to set up a neutrino communications network that transmits directly through the earth. It couldn’t transfer very much information, but if all you needed was a few dozen bits (taper/no taper, interest rates up/down, etc.) it might work a treat. Did anyone happen to notice an extra neutrino flux in the upper Midwest corridor at 2 p.m. last Wednesday? Perhaps Wall Street has now co-opted not just the math geek community, and not just the physics geek community, but the experimental physics geek community. Wouldn’t that be great?