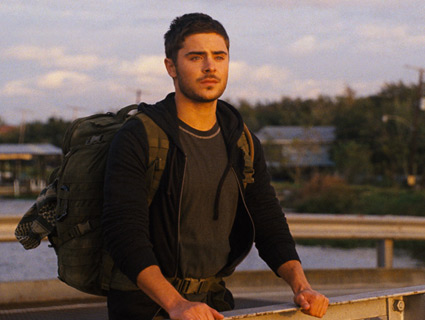 Zac Efron. Peering deeply into the moral and emotional complexities of human existence and romantic entanglements, or something.Photo courtesy of <a href="http://theluckyonemovie.warnerbros.com/index.html">Warner Bros.</a>

A lot of craptacular things came out of the Iraq War. The torture at Abu Ghraib. The chaos and the casualties. The deep distrust in government. Carlos Mencia’s stint on the USO tour circuit.

And then there’s The Lucky One—a perfect storm of middle-school daydreams and unintended parody.

The movie tells the love story of a handsome, Dr. Seuss-quoting Iraq War veteran and a beautiful dog-motel proprietress. Sgt. Logan Thibault (Zac Efron) is a Marine on his third tour of duty. The morning after a night raid, he spies a photo of an American blonde in a pile of rubble and retrieves it from the rubbish—an act of curiosity that serendipitously causes him to avoid an incoming RPG. After experiencing numerous other brushes with explosive death, Logan comes to the conclusion that the photo kept him alive through its magic, good-looking-girl-I’ve-never-met-before protective aura. So, after returning home in one piece, a melancholy and shell-shocked Logan makes the 1480-mile hike—on foot—from Colorado to rural North Carolina in his effort to track down this mystery woman/guardian angel.

He finds her in about fifteen minutes.

In case you didn’t already infer, The Lucky One is based on a Nicholas Sparks book of the same name. Nicholas Sparks (not to be confused with the nineteenth century Ottawan timber magnate) is the R. L. Stine of formulaic, hella-bankable romantic novels—best-sellers that frequently get turned into movies with big budgets and top-billed stars. If you’ve sat through any of these adaptations—Message in a Bottle, Nights in Rodanthe, The Notebook, Dear John, A Walk to Remember, The Last Song—then you know what you’re in for this time around.

As in 2010’s Dear John, the central character in The Lucky One is an gentle soul who, when he’s not mowing down insurgents overseas, is busy falling in love on American soil. “Why did I make it out when so many guys didn’t?” Logan narrates. During The Lucky One‘s hour and forty minutes, the audience finds out why: His destiny is to win the heart of, and make sweet, clammy love to, the kindly dog-motel owner named Beth Clayton (Atlas Shrugged: Part I star Taylor Schilling). And to help take care of her precocious son Ben (Riley Thomas Stewart). And to lend a strapping hand caring for their farmland. And to help Beth fend off the violent advances of her jealous boozehound ex-husband Keith (Jay R. Ferguson).

Basically, any ol’ trope that will keep him the hell away from feeling sad and killing Iraqis.

The beautiful thing about reviewing a movie like this is that it sort of pans itself; all I had to do above was paraphrase the synopsis, and you already know whether it’s a good idea to pay to see it.

So I’ll make this quick:

The film’s themes of loss, war, and fate are irreparably dulled by a one-two punch of crummy dialogue and zombified acting. “You should be kissed every minute of every hour of every day,” Logan moans to Beth during an adrenalized make-out sesh. Miraculously, she is indeed turned on by these proceedings. “Finding that photo was like finding an angel in hell,” Logan later confesses to his dream woman because, you know, war is hell and she’s an angel.

The one exception to the uniformly bad emoting is Blythe Danner, who plays Beth’s wily grandma. Unfortunately, she’s relegated to doing little more than dropping ripostes in a Southern accent.

Aussie director Scott Hicks, who’s been in a creative freefall since helming 1996’s Shine, shows off his ability to pull unintentional laughs out of solemn scenarios. The depictions of PTSD have the emotional wallop of a throw pillow. The film’s war sequences are so halfheartedly staged that they look like Green Day music videos. And in a pivotal scene in which Beth tearfully reminisces about her dead brother, the corniness of her emotional breakdown sooner inspires chuckles than pity.

The Lucky One gets a wide release on Friday, April 20. The film is rated PG-13 for some sexuality and violence. Click here for local showtimes and tickets.