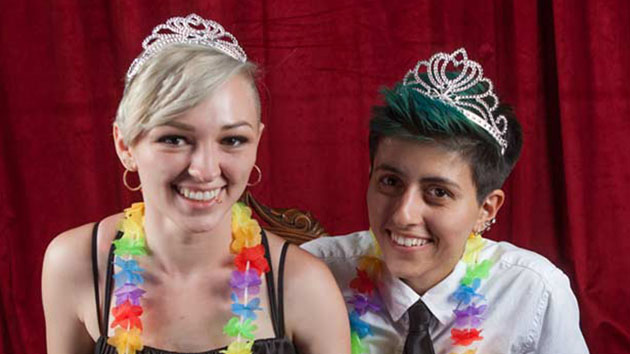 It’s just before 7 p.m. at Chabot College in Hayward, California, on June 7, and the music is blaring outside. Cheerleaders climb on each other’s shoulders to form pyramids. Adults in heels, tuxedoes, and hand-crocheted rainbow scarves line the red carpet while Rochelle Collins, the program director at Project Eden, runs around making sure everything is just right. This is, after all, the big day.

At 7:10 p.m., Collins turns to address the crowd. “Ready?” She looks around. “Let’s go!” she yells, grabbing a banner with three other organizers, and leading the procession.

Teens with multicolored hair, girls and guys in ball gowns and tuxes, tiaras, and jeans rush down the red carpet, skipping, smiling, and high-fiving adults on the sidelines. Some pump their fists victoriously in the air.

This may be just another prom, among the thousands played out in cafeterias and ballrooms across the country every spring. But here at Chabot College, the prom these teenagers are skipping, smiling, and fist-pumping about is also one of the nation’s oldest gay prom. And each time it happens—this year’s was the 20th—it is a kind of victory not just for organizers, but for kids who often—still—have nowhere else where they can truly be themselves.

A lot has changed in two decades. Back in 1995 when the prom was founded at Project Eden, an offshoot of the nonprofit Horizon Services, the AIDS epidemic was still in full swing, the overwhelming majority of Americans stood steadfast against gay marriage, and actress Ellen DeGeneres had yet to break national ground by revealing on the cover of Time that she was gay.

Ken Athey, the prom’s founder and a counselor working with local teens, had no idea what to expect that first year. He knew it wouldn’t be easy. In the pre-internet era, it was a problem just getting the word out. Then came the threats. The community was riled. One student who was identified in a local newspaper said he received death threats. On the day of the prom, there was a bomb threat. Protesters outnumbered attendees.

Toting homophobic signs that made liberal use of anti-gay epithets, they screamed through bullhorns and wore rubber gloves and masks, a common tactic of anti-gay protesters in the ’90s. Police officers stood between the protestors and the prom’s teenage attendees. Hayward High School teacher Mike Dwyer remembers “running the youth into Centennial Hall,” the spot that used to host the prom.

“Here we are 20 years later,” Dwyer says. “For the first time we have zero protesters. It was down to one guy for the last two years and he’s gone,” he says, clapping for prom entrants as they pass.

Today, the AIDS epidemic has evolved into HIV, controllable with powerful medications. The majority of Americans favor gay marriage, and many people now come out in high school as gay, lesbian, bisexual, and transgender, and some even feel comfortable defining their gender identity and sexuality in other nuanced ways.

But things aren’t perfect: Some schools still ban same-sex couples from proms. Parents aren’t always accepting. Then there’s “bullying and everything that goes along with it,” Dwyer says. That “hasn’t changed. It needs to be addressed.”

Collins, program director at Horizon’s Project Eden, was heartened by the hundreds of teens who turned out this year. But for every teen who felt comfortable enough to attend the prom this year, there are other kids who stayed away, Athey says. And those who did come didn’t want to go to their own proms.

“It’s not safe to go to the prom with who you really love and want to take,” Athey says. “It’s not safe for the ones who may not be totally out, unsure, or fearful.”

Project Edens’ Collins emphasizes that even as support of LGBT people grows, this prom continues to serve a vital purpose.

“When they come in on the receiving line and they have all these people cheering them on, they’re overwhelmed with happiness, because it’s all about acceptance,” Collins says. “It’s a needed event because the young people need a place to go to where they feel safe and accepted.”

Fremont student James Verges said he went to his prom, but came to this one anyhow because, “It gives everybody a fair chance. It’s a safe place for people to really be who they want to be, rather than what other people expect them to be.” 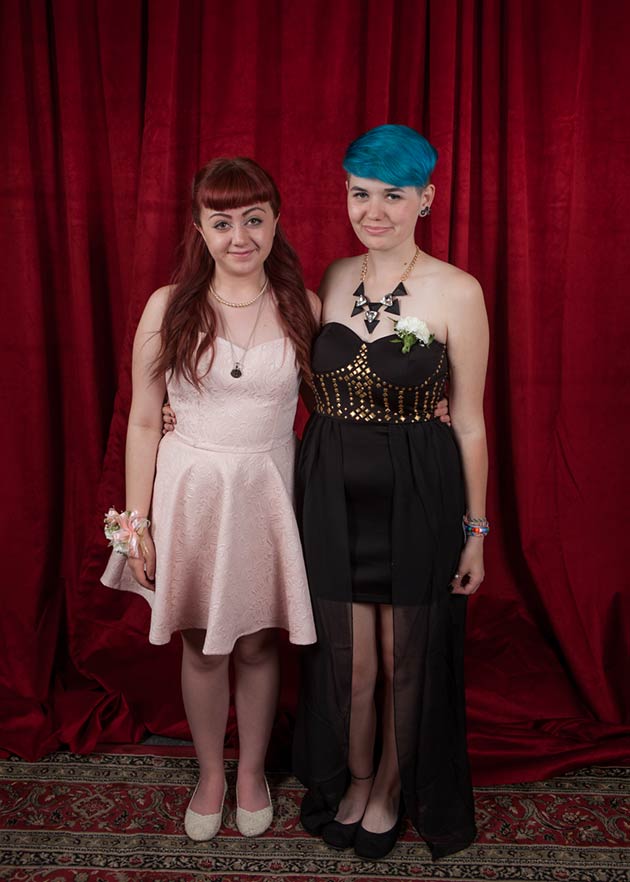 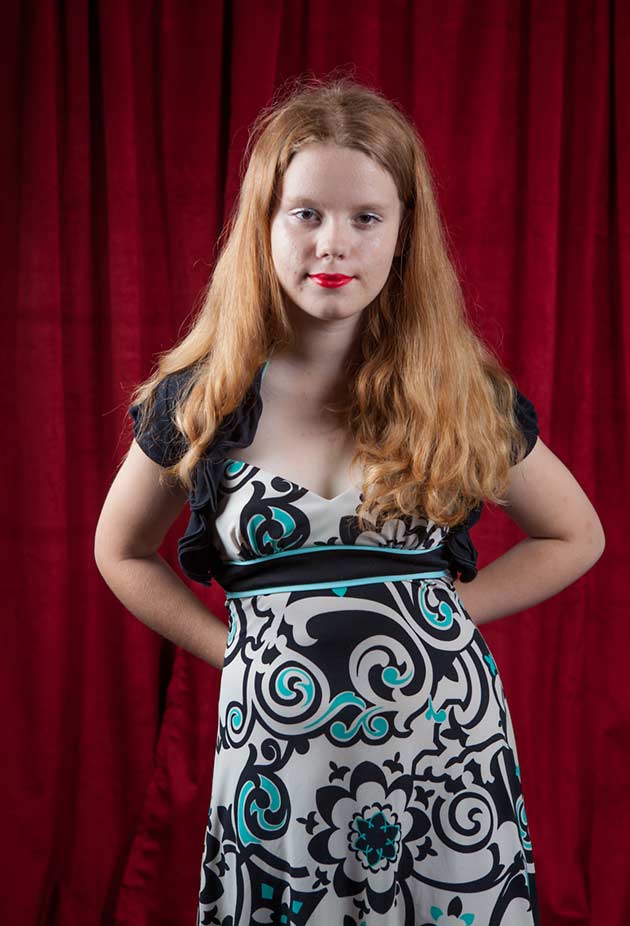 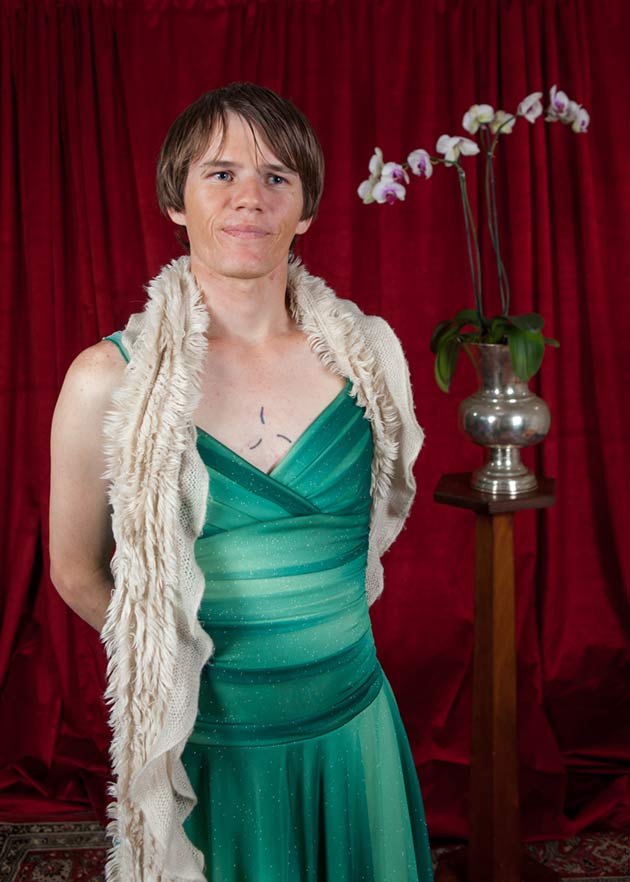 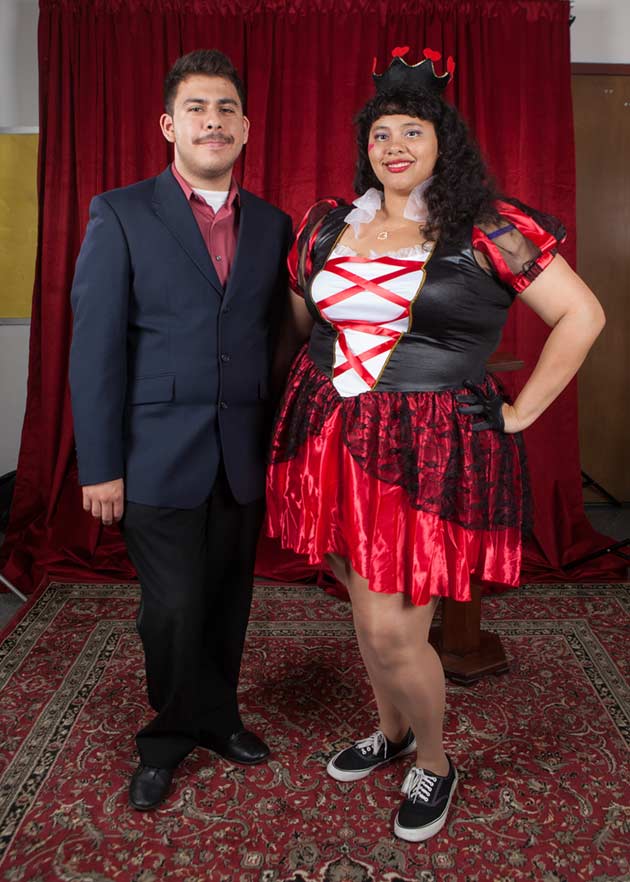 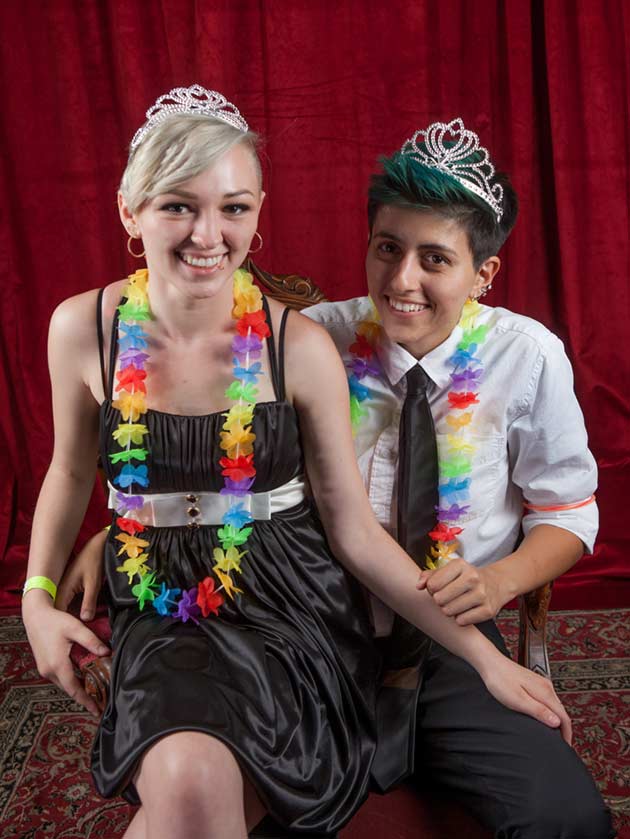 Kalee Kennedy, 19 and this year’s prom queen, is from Antioch, California: “I believe that gay prom is a wonderful opportunity for those who were previously unable to attend their own prom due to prejudice or fear. Many LGBTQA youth need events like this to remind them that they are not alone and that they will not always be judged.”

Zohal Sharif, 19 and this year’s other prom queen, is from Union City, California: “Gay Prom offers a safe space for LGBTQIA2-S and allies to experience the full ‘prom experience’ they were not given in their own high schools. This event is still important because across the country there are couples and individuals facing prejudice and who choose to not even go to their proms. Everyone should have a fun, cheesy prom experience.” 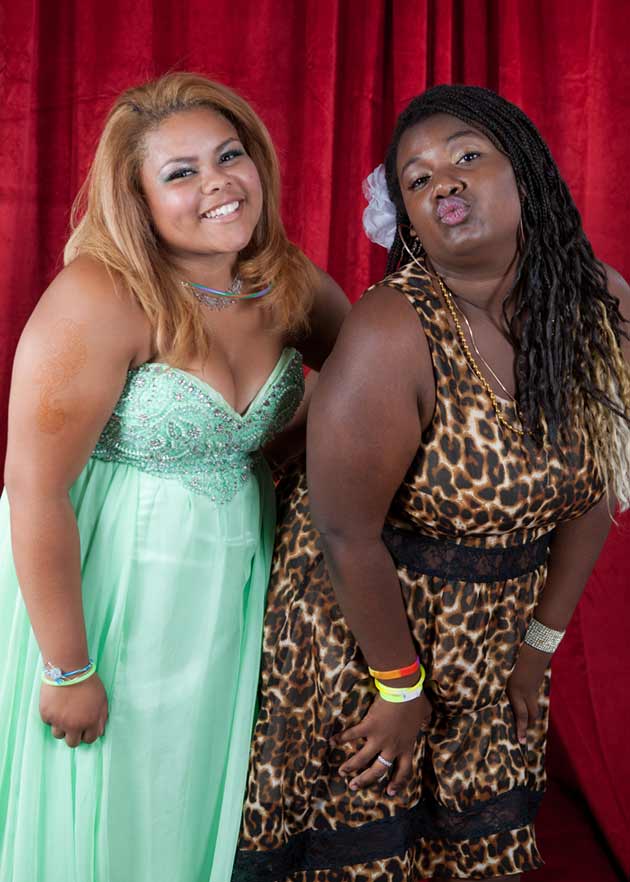 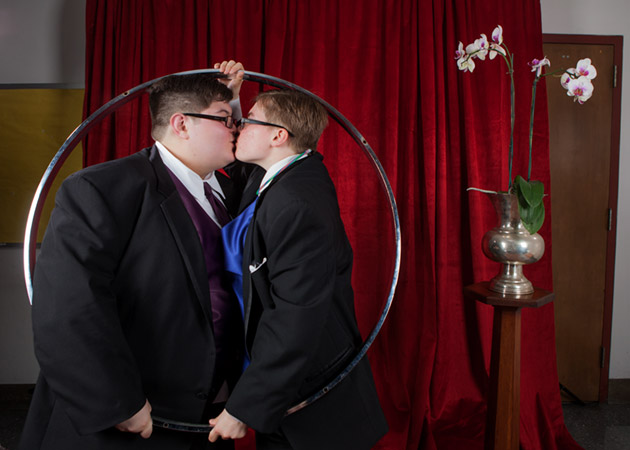 Skylar Gordon, 17 is from Milpitas, California: “It means a lot to have a prom—but not only to have a prom but have one that you know is going to be accepting. I really felt like I belonged at gay prom. I’ve never really fit in at any sort of school-related dance, and I never was really out about anything at a school dance. Here, I could be myself. I could be with my boyfriend, as a pansexual transgender guy, and win cutest couple. That would never happen at a school-related prom, or any dance of any kind.” 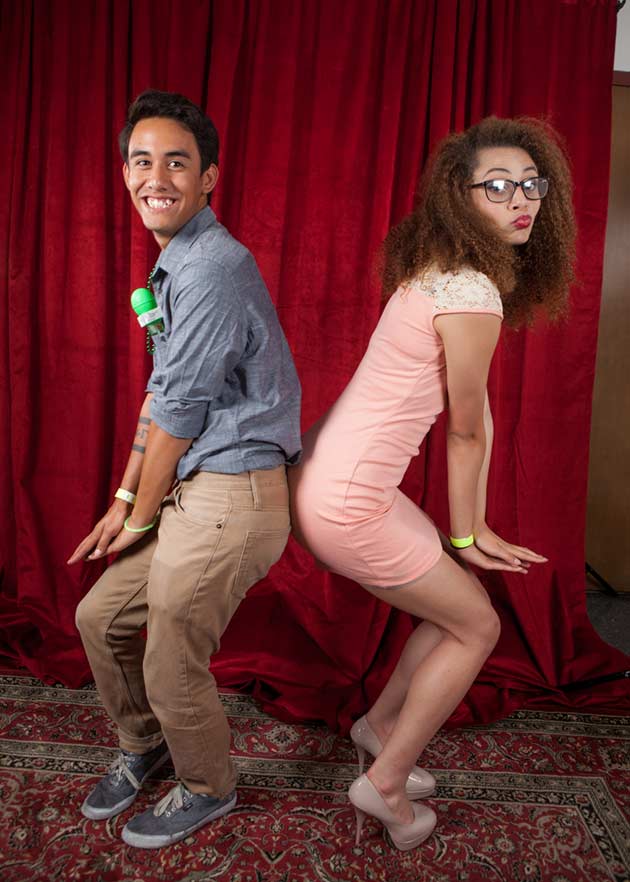 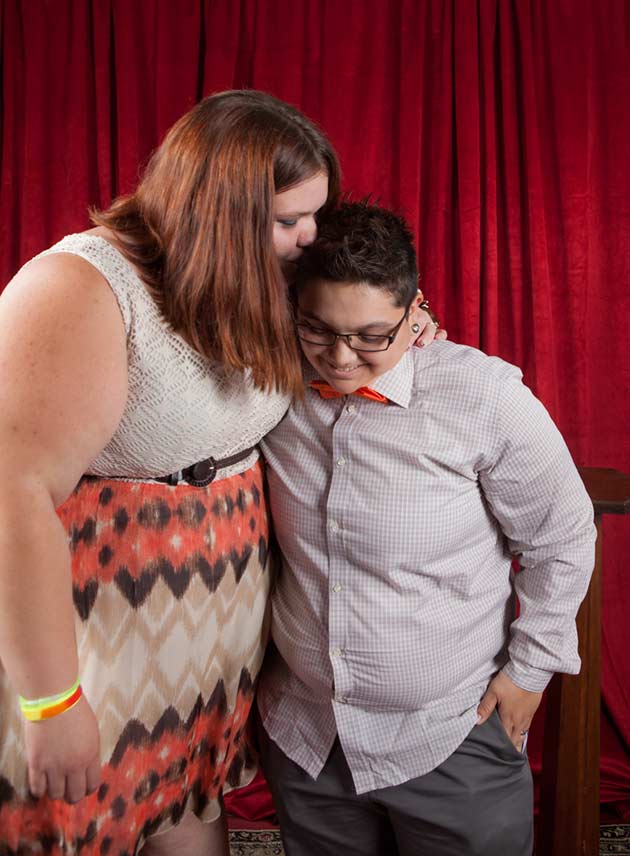 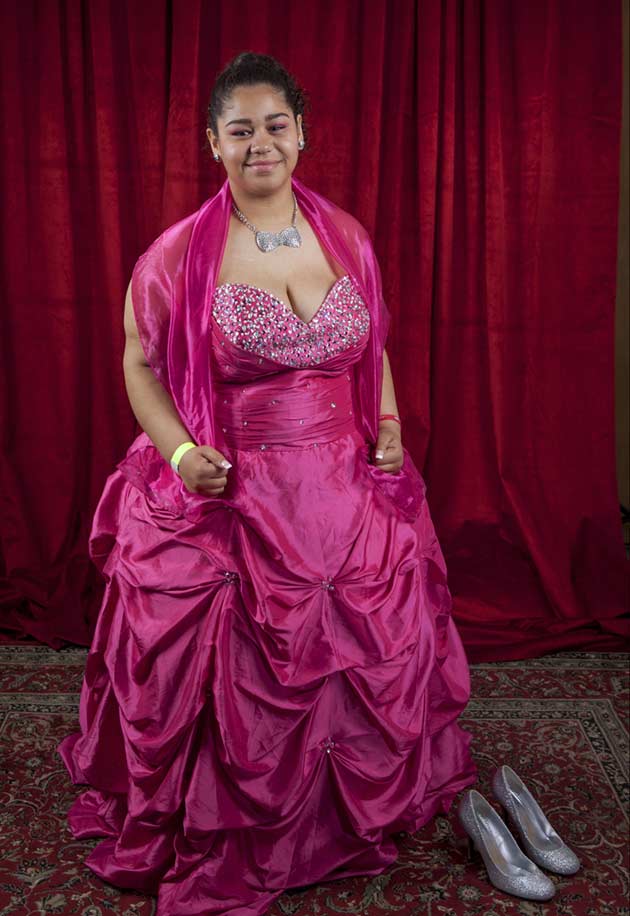 Miracle Minton, 16, is from Hayward, California: “You get to go to a prom where you feel more comfortable. There are schools that don’t accept same-sex dates to their proms, which I think is really absurd. Also, it’s a good event to meet more people who are fabulous. Gay prom was way more fun than my high school prom. I think that prom is good for the people who are scared to express their sexuality because then they can socialize with people who are just like them, the LGBT community.” 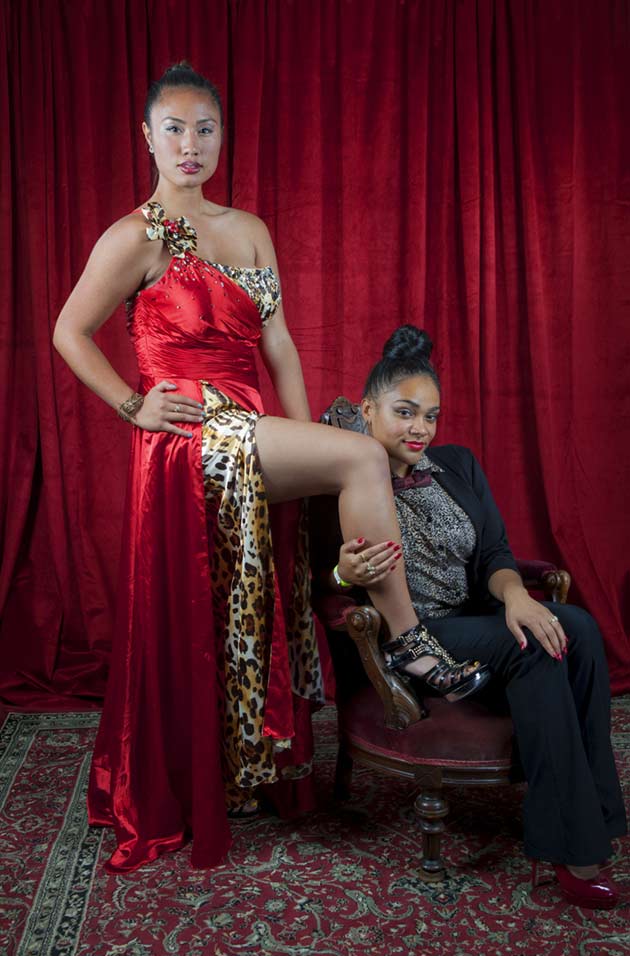 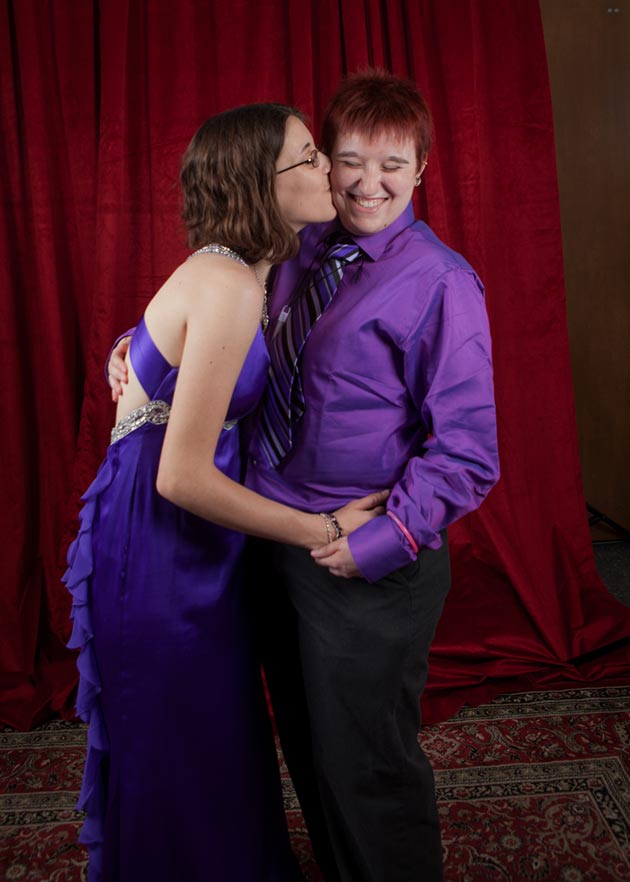 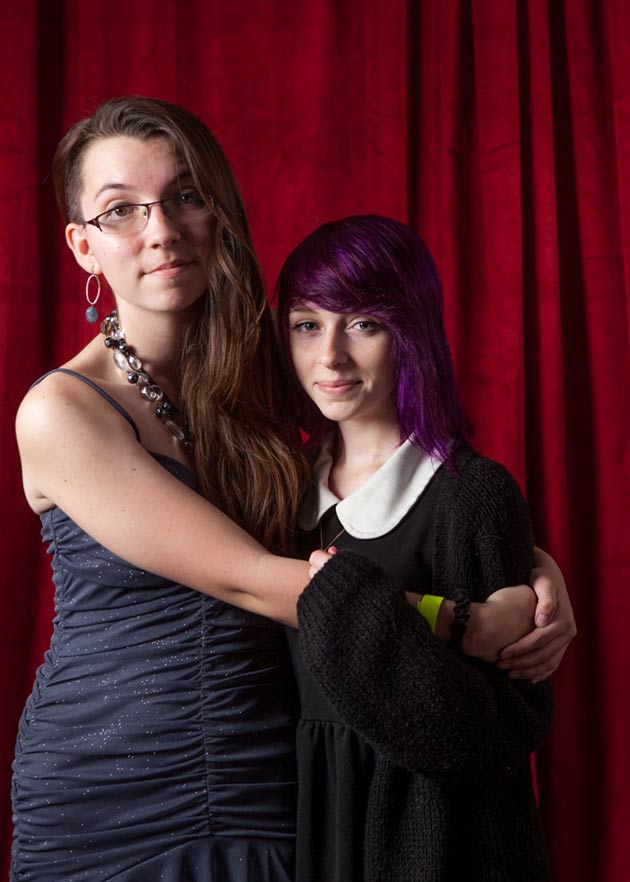 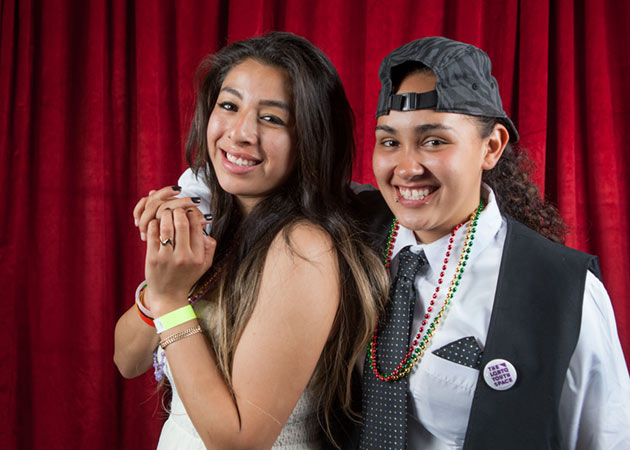 Reyna Romero, 17, is from San Leandro, California: “I attended gay prom with my girlfriend and some close friends. I really think gay prom was a blast and I will always remember and cherish that night. Gay prom is not only important because it celebrates these individuals, but because it was great to go to a prom where my girlfriend and I weren’t discriminated against. My home school like many others doesn’t allow girls to wear tuxes and guys to wear dresses. My girlfriend and I felt really important and loved the whole time we were there.”

Check out video of this year’s gay prom below: