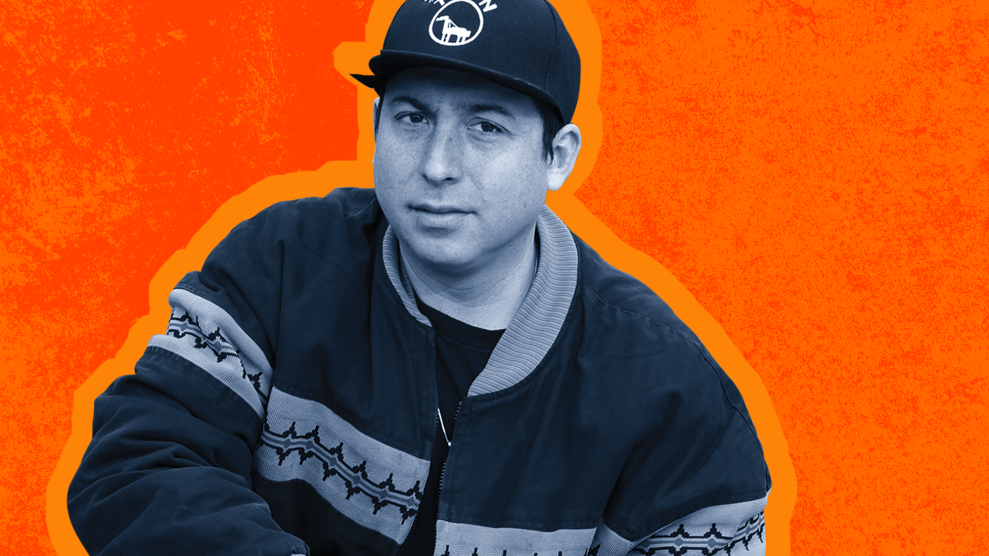 In 1935, when Gertrude Stein returned to Oakland, California, for the first time in decades, she stopped by her childhood home to find the big house and the eucalyptus trees and the rose hedge she remembered all gone. “There is no there there,” she later wrote in Everybody’s Autobiography, a phrase for which she (and, unfairly, Oakland itself) would long be remembered.

Their stories are those of contemporary Oaklanders—postal workers and custodians and high schoolers who are fighting “to be a present-tense people.”

Author Tommy Orange uses Stein’s words to evoke a different sort of erasure in There There, his debut novel, out on June 5. The book’s 12 main characters, like its 36-year-old author, are Native American—their ancestral land, one reminisces, buried in “glass and concrete and wire and steel, unreturnable covered memory.” Their stories, which become ever more tightly braided as the book moves toward its explosive finale (at a powwow in a football stadium), are those of contemporary Oaklanders—postal workers and custodians and high schoolers who are fighting “to be a present-tense people.”

Some 70 percent of the country’s roughly 5 million Native Americans are now city dwellers. Yet the urban Native experience had never been portrayed in literature, “as far as I could tell,” Orange says as we walk around Oakland’s Lake Merritt. That, coupled with his “raw virtuosic talent” (as novelist Claire Vaye Watkins puts it in her cover blurb), sparked a bidding war among publishers who hoped to end the drought of major books from Native American writers. Sherman Alexie, who first made waves with his 1993 story collection, The Lone Ranger and Tonto Fistfight in Heaven, (and who has recently been caught up in a #MeToo scandal), lamented this “fallow period” during a Fresh Air interview last year. After reading one chapter of Orange’s book, he emailed his writer friends to say, “It’s here. That book I’ve been waiting for.”

Some 70 percent of the country’s roughly 5 million Native Americans are now city dwellers.

Orange, who calls himself a “timid, shy guy,” has deep brown eyes and a smattering of freckles. His white mother comes from a longtime Bay Area family. His father, raised in Oklahoma, is a member of the state’s Cheyenne and Arapaho tribes. Dad is a “walking stereotype,” Orange says. He has long hair, and when they were growing up he made his children listen to “peyote tapes”—recordings of Native American Church songs Orange only later came to love. Orange remembers “a lot of fighting at home” as his parents’ marriage dissolved, and brawling in high school with kids who called him Chinese. After getting a college degree in sound engineering, he couldn’t find relevant work, so he took a gig at a used bookstore in San Leandro. That’s when “I fell head over heels” for literature, he says, starting with Franz Kafka and Jorge Luis Borges. “I always felt like I was playing catch-up, so I got obsessive about how much reading and writing I was doing.”

It was around the same time that Orange began opening his eyes to his heritage. He spent eight years working on and off at Oakland’s Native American Health Center, eventually creating a media lab there. When his dad was diagnosed with stage 4 lymphoma and decided to treat it with traditional Native healing methods, Orange joined him in New Mexico for the ceremonies. “That was the turning point for me,” Orange says. “I learned about who I am and what I come from.” (His father, he adds, is alive and cancer-free.)

“The thing just popped into my head; the whole thing felt right there,” Orange said of his debut novel.

The concept for There There came along in 2010, as Orange was driving down to Los Angeles for a concert. He’d just learned his wife was pregnant, and he was thinking it was time to get serious with his writing. And then “the thing just popped into my head; the whole thing felt right there,” he recalls, curling his wide hand into a fist. “It was somehow getting everybody to this powwow.” He spent the next six years honing his characters, including Thomas Frank, a bumbling janitor whose “one thousand percent Indian” father was modeled on Orange’s dad, and Orvil Red Feather, who secretly dons his grandmother’s tribal regalia to practice TV dance moves in the mirror.

In 2014, Orange enrolled in an MFA program at the Institute of American Indian Arts in Santa Fe, New Mexico, a first-of-its-kind writing course whose instructors are mostly of indigenous descent; he teaches there now. His thesis reader, Pam Houston, author of the story collection Cowboys Are My Weakness, describes Orange as “more than a good student—he’s a deeply soulful man who makes everyone around him want to try harder, do better, without him seeming to say or do anything at all.” Classmates included Terese Mailhot, whose lauded 2018 memoir, Heart Berries, sold within weeks of There There.

As we continue our stroll around Lake Merritt, gray-bellied clouds bring a few spits of rain, and we take cover for some lunch at the brewpub Portal. Then Orange leads me to an old haunt, the Intertribal Friendship House, one of the first community centers geared toward urban Native Americans. We’re greeted by 22-year-old program manager Javier Patty, who, with Orange’s mentoring, edited a film about relocation. Patty, a member of the Muscogee Creek and Seminole tribes, tells me he dreams of working at Google as he shows me a greenhouse where the nonprofit grows onions and cabbage used for food events, such as an upcoming “precolonial” dinner.

Orange sits down with the center’s director, Carol Wahpepah, with whom he keeps in touch. She asks for photos of his six-year-old son. He then presents her with an early UK edition of There There, whose cover depicts a painted feather surrounded by a pattern of droplets. “Carol, let me tell you what they tried to get on here—a headdress!” Orange says.

“Oh, no!” she says. They shake their heads and laugh.

“It was really sweet to be able to hand-deliver my book to Carol,” Orange tells me as we make our way back toward the lake. There There is fiction, but he sees it as filling a blank in the historical ledger. “I’m super happy I can at least be one voice saying, ‘No, but wait—there’s this, too.'”