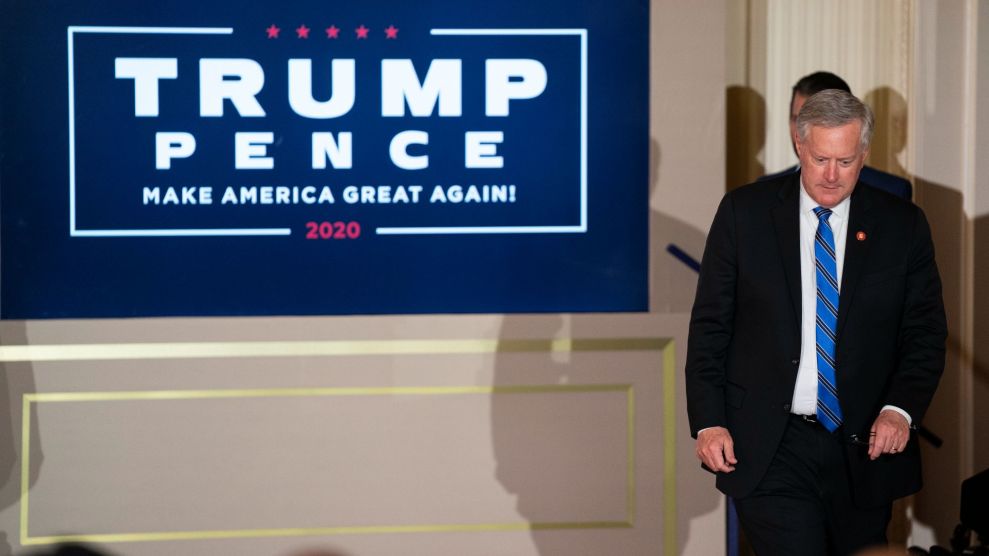 Due to his refusal to cooperate with the congressional committee investigating the January 6 Capitol riot, Mark Meadows, a former representative for North Carolina and Donald Trump’s final chief of staff, was held in contempt late Tuesday night by the legislative body in which he once served.

Meadows initially seemed to cooperate with the January 6 committee, supplying it with thousands of documents and signaling that he would sit for a deposition. At the time, Meadows’ relatively conciliatory approach cut a sharp contrast with the pugnacious attitude of Trump guru Steve Bannon, who chose to rebuff the committee at every turn. But Meadows has now joined Bannon as the second Trump associate referred to the Department of Justice for possible criminal contempt charges for refusing to comply with the committee’s investigation. Last month, the DOJ obtained an indictment against Bannon.

Meadows’ tenuous relationship with the committee collapsed when he cited a legally dubious argument that executive privilege allowed him to withhold select documents. Due to the disagreement, Meadows ceased cooperating and failed to show up for a deposition, although he told the committee that he would answer select questions in writing. In a letter to Meadows’ lawyer, committee chair Bennie Thompson (D-Miss.) asserted that Meadows had failed to state which specific areas of inquiry he considered to be covered under executive privilege and announced that the panel would vote to recommend that the House charge him with contempt. The House echoed the committee’s recommendation Tuesday evening in a 222–208 vote, with every Democrat and two Republicans—Reps. Liz Cheney (Wyo.) and Adam Kinzinger (Ill.)—voting in favor.

Some of the documents Meadows did agree to hand over have already shed new light on Trump’s frantic and unprecedented efforts to overturn the 2020 election. In its referral to the House, the January 6 committee unveiled new information that it had gleaned from Meadows’ emails and personal text messages, including a chilling PowerPoint reportedly created by conspiracy theorist Phil Waldron that urged Trump to declare a national security emergency, proclaim all electronic voting invalid, and ask Congress to decide on a path forward. In addition, the document recommended that Vice President Mike Pence reject electors from “states where fraud occurred” or replace them with Republicans. Meadows’ lawyer told the New York Times that the former chief of staff had received the PowerPoint but had done nothing with it.

The material Meadows turned over to the committee also included a message in which Meadows informed someone that the National Guard would stand by to “protect pro Trump people”; a message in which an organizer of the January 6 rally asked Meadows for “some direction” because the situation had gotten out of hand; and an email discussing a ploy to appoint alternate slates of electors to keep Trump in power.

In a dramatic twist on Tuesday night, Rep. Cheney revealed to the committee a string of text messages sent to Meadows by Republicans, Fox News hosts, and even the former president’s own son, Don Jr., imploring the White House to take stronger action to quell the mob.

The Department of Justice will now have to decide whether to enforce Congress’ vote and seek an indictment of Meadows for contempt of Congress. If convicted on such a charge, he could face up to one year in prison.