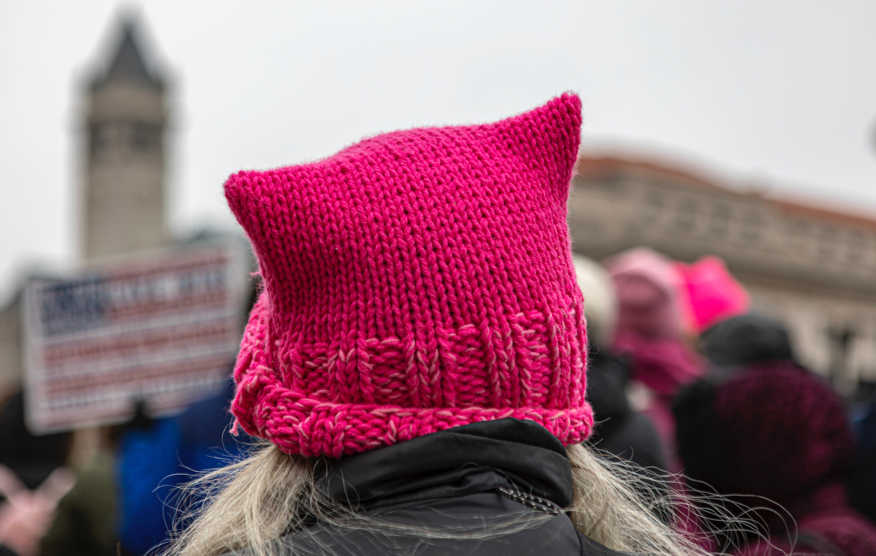 Who could the pussy hats possibly be for this time? Who’s left to convince that we matter?

Alright, maybe I should have expected the return of “Nasty Woman” shirts and warnings of the Republic of Gilead. But in the wake of the Supreme Court’s draft decision overturning Roe v. Wade, I couldn’t help but frown at the instinct by some to dig out their Future Is Female’s best. Don’t these outdated protest aesthetics feel like relics now, reminders that we had naively miscalculated what it would take to take down an alarmingly well-organized, decades-long mission? For me, spotting these worn tactics at the protests this week rendered the renewed fight limp on arrival.

Protests are critical. The fiercer the better when facing a decision dripping in nostalgia for a brutally unequal past. Still, it’s worth examining the curious compulsion to dust off yesterday’s tactics in order to protest what those tactics failed to stop.

An effort to recall the urgency with which hundreds of thousands of protesters marched in the 2017 women’s march to counter Donald Trump’s inauguration is an understandable one. But these reflexive urges feel at once out of step with the cruel reality that’s been laid bare this week. Despite years of resistance, from the aesthetic to the ballot box, the right to legal abortion is about to get destroyed. Despite voting—as we were relentlessly instructed to do—and ultimately winning—we still lost.

Of course, the reemergence of resistance gear is a small embarrassment when measured up against the predictable cast of characters rising like zombies this week in order to wag fingers at those who declined to vote for Hillary Clinton in 2016. That crowd reliably pushed back with equally dated defenses. Frequently slipping to the margins of these squabbles is what happens to the countless women on the verge of losing access to health care. But who cares when the same Twitter fights of the Trump years refuse to die?

Not to be outdone, arguably the most egregious bout of deja-vu came from Democratic leaders, who in their scramble to respond to this week’s SCOTUS bombshell, effectively copied and pasted language ripped straight from the Trump era in order to try and rally the base from despair.

“The elections this November will have consequences because the rights of a hundred million women are now on the ballot,” Senate Majority Leader Chuck Schumer told a crowd one day after the SCOTUS leak. If that sounds familiar, it’s because it is. Meanwhile, most Dems still can’t come out and say the word “abortion.” Sure, President Biden, in his first statement on this week’s leak, did manage to squeak out the word. But as Rebecca Traister points out, it’s no accident that it got buried four paragraphs deep in a statement otherwise cloaked in the safe language of a woman’s choice.

With leadership like that, who can blame people for reaching for their RBG pearls right now?

One would think that after years of warnings from repro rights groups, we’d be better equipped for this moment. Instead, Democrats have resurrected tired themes for an exhausted crowd. That same fatigue is what makes the instinct to rehash the Trump years at every turn, down to the literal same hats, simply unbearable.

When people donate, they want to see the federal government opening its fat wallet to fund abortion pills. When they protest, they want to see more lawmakers reacting with the same fury Senator Elizabeth Warren had marching alongside demonstrators. When they vote—and deliver control of Congress and the White House—they expect leaders to start acting with all the authority they earned at the ballot. As my colleague Madison Pauly noted at one Oakland protest this week, “the 2017 vibes are strong.” That’s just not going to cut it anymore.