Gulbuddin Hekmatyar
As a university student in the late 1960s, Hekmatyar was notorious for spraying acid in the faces of female students. “He was a nasty guy,” remarked Graham Fuller, former Kabul bureau chief for the CIA, which gave Hekmatyar $600 million in the 1980s. “He spent a lot more of his time fighting other mujahideen than killing Soviets.” A close ally of Osama bin Laden, Hekmatyar led the Islamic Party, one of the most violent, anti-Western mujahideen factions. During a stint as prime minister, he ordered the shelling of Kabul, reportedly killing 25,000 civilians in 1994. When the Taliban took the city in 1996, he fled to Tehran, but his outbursts against the Karzai regime and the US proved so embarrassing that the Iranians sent him packing. In 2002, the CIA tried to take him out in a drone air strike, but Hekmatyar survived to fight alongside the Taliban. He has sworn to do battle “till the last drop of blood moves in my body.”

Yunis Khalis
Khalis, the “godfather” of Nangarhar province, led a rival branch of Hekmatyar’s Islamic Party and served as chair of the US-backed coalition of anti-Soviet mujahideen. In 1988, he led a delegation of jihadis to the United Nations, where he met his benefactor, President Ronald Reagan. But in 2003, he turned around and declared jihad against US forces in Afghanistan. Khalis died in 2006 at age 87, but his legacy lives on via his violent disciple Jalaluddin Haqqani and Haqqani’s son, Sirajuddin, who operate guerrilla bases in North Waziristan. 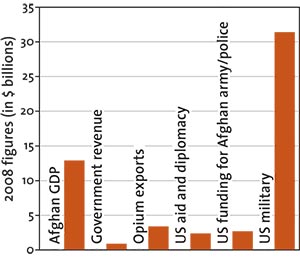 Abdul Rasul Sayyaf
The one-time leader of the jihadist Islamic Union for the Liberation of Afghanistan, Sayyaf has received hundreds of millions of dollars in Saudi funding in addition to CIA aid. Revered by Wahhabists, he was a key mentor to 9/11 mastermind Khalid Sheikh Mohammed as well as bin Laden. Together, Sayyaf and bin Laden built a network of training camps and bunkers around Jalalabad that was eventually used by Al Qaeda. As a member of the Afghan parliament, Sayyaf is now pushing for amnesty for jihadists.

Sibghatullah Mojaddedi
Mojaddedi, moderate by comparison, likely scored CIA backing during the anti-Soviet jihad and in 1989 became president of the Islamic interim state of Afghanistan, in which capacity he met with George H.W. Bush. These days he’s busy attempting to reconcile the Karzai government with the Taliban and Hekmatyar.