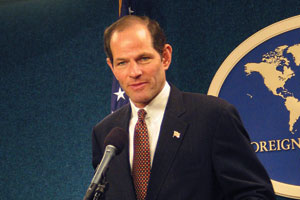 On Monday, conservative Supreme Court Justice Antonin Scalia and the Obama administration ended up on opposite sides of a case involving civil rights—in which the administration sided with the alleged racists. In Cuomo v. Clearing House Association, the court delivered a sharp rebuke to the Obama administration and one of its key banking regulators, the Office of the Comptroller of the Currency (OCC), which had gone to bat for national banks accused of racially discriminatory lending practices. And while the ruling was overshadowed by the chatter surrounding the court’s reversal of Ricci v. DeStefano—the now infamous Connecticut firefighter case decided by Sonia Sotomayor—it could have significant ramifications for how the financial system is policed.

Cuomo v. Clearing House Association got its start in 2005, when then-New York attorney general Eliot Spitzer discovered that many major banks operating in his state were making a disproportionate number of high-interest loans to minorities. He sent letters to Wells Fargo, Bank of America, Citi, and other big banks seeking information about their lending practices. Rather than respond to the request, the banks sued Spitzer through their trade group, the Clearing House Association, arguing that Spitzer’s request violated federal banking rules.

To up the ante, the banks sought support for their position from the OCC, which happily came to their aid. The courts gave the OCC tremendous deference in the case, and Spitzer lost in both the trial court and the 2nd Circuit Court of Appeals. After Spitzer left office under a bit of a cloud, his successor, Andrew Cuomo, pursued the litigation. He argued that the OCC had vastly exceeded the authority Congress had given it to ensure the safety and soundness of national banks, and that those banks still had to comply with state consumer protection and anti-discrimination laws.

Today, Cuomo (and by extension, Spitzer) prevailed in the Supreme Court in a 5-to-4 decision, with states’ rights advocate Antonin Scalia writing for the majority, supported by justices Stevens, Souter, Ginsburg, and Breyer. The decision is a decisive slapdown for the Obama administration, whose position in the case was deeply opposed by civil rights groups and also contradicted its stated policy about the need for better financial regulation. The decision also likely puts an end to a decade of overreaching by the OCC, which has spent many hours in court preventing states from cracking down on abusive bank practices, many of which played a major role in creating the subprime lending crisis. Indeed, if Spitzer had been able to pursue his investigation back in 2005, it’s likely he would have discovered what lawyers in Baltimore are just now uncovering: rampant discrimination by national banks.

As the New York Times reported in early June, Wells Fargo aggressively targeted African Americans (referred to by bank employees as “mud people”) and pushed them into subprime “ghetto” loans, even when they qualified for better rates. The expensive loans ultimately led to a rash of foreclosures, which cost Baltimore tens of millions of dollars in both taxes and city services. Similar practices were likely at work in New York, where a Times analysis found that African American households with incomes above $68,000 were five times as likely to have high-interest subprime mortgages than similar or even poorer white households. (Wells Fargo customers had even worse ratios: In New York City, 16 percent of the bank’s black borrowers had subprime loans, compared with 2 percent of whites.)

Had Spitzer been able to investigate the banks, he might have put the brakes on some of these practices fully two years before the entire subprime industry collapsed and brought the rest of the economy down with it. Instead, the OCC fought Spitzer’s investigation tooth and nail, and this year received a helping hand from the Obama administration. In one of the first government briefs signed by former Harvard Law School dean and new Solicitor General Elena Kagan, the administration backed both the banks’ effort to avoid scrutiny of their business practices and the OCC’s contention that it has virtually unlimited authority to squash state law enforcement efforts against the banks it regulates (and which fund its budget, incidentally).

Scalia was having none of this interpretation, and he scolded the OCC for its incursion into traditional state powers. He found the OCC’s argument “bizarre” and pilloried its assertion that it was okay for states to have anti-discriminatory lending laws on the books but not to enforce them— a situation Scalia described as one where “The bark remains, but the bite does not.” He also observed a basic weakness in the argument that the Obama administration apparently overlooked, which is that it conflicted with decades of precedent. States, he writes, “have always enforced their general laws against national banks—and have enforced their banking-related laws against national banks for at least 85 years.”

Unfortunately for thousands of former homeowners, Scalia’s voice of reason has come four years too late. In the end, the major beneficiary of the decision may be Spitzer, whose sexual dalliances pale in comparison to the damage wrought by the banks he sought to rein in at a time when no one else would. The Supreme Court decision may be just the latest chapter in his public rehabilitation.