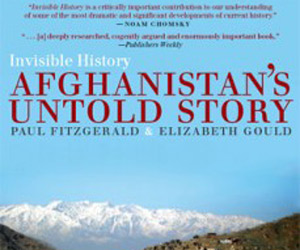 The United States’ involvement in Afghanistan is growing deeper and more costly–30 US soldiers have died there since the start of July, making it the deadliest month since the US invasion in 2001. Vice President Joe Biden was probably right when he said in a radio interview on Thursday that the war is “worth the effort.” Still, now is a good time to better understand exactly why it has been so hard to turn Afghanistan into a more peaceful place. A new book by two US journalists explores some less well-known historical explanations.

In 1981, Elizabeth Gould and Paul Fitzgerald were the first US journalists to enter Afghanistan after the Western press corps had been expelled from the country a month after the 1979 Soviet invasion.  The footage that they shot for CBS News painted a far different picture of the occupation than had been portrayed in the US media. Yet they say that the story that Dan Rather aired that spring buried the most important revelations–a problem that they’ve seen with US media coverage of Afghanistan ever since. In January 2009, they published “Invisible History: Afghanistan’s Untold Story,” a book that Selig Harrison, the Washington Post‘s former South Asia bureau chief, calls “a much needed corrective to five decades of biased journalistic and academic writing about Afghanistan that has covered up the destructive and self-defeating US role there.” Mother Jones spoke with Gould and Fitzgerald last month.

Mother Jones: In your view, what do most people not understand about the US government’s early involvement in Afghanistan?

Paul Fitzgerald: In the major media, you get the story about a Soviet invasion. What you don’t get are all the politics and motivations that were behind that.

Elizabeth Gould: When the Soviets crossed the Afghan border, President Carter exclaimed that this was the greatest threat to peace since the Second World War. The claim was that the Soviets were running out of oil and this was their first step to the Persian Gulf to get our oil. So that became the mantra.

MJ: So when did a different explanation catch on?

Gould: In 1998 Jimmy Carter’s national security advisor Zbigniew Brzezinski went public with the fact that six months prior to the Soviet invasion, he was getting a black project signed by President Carter to basically allow for a provocation on the Soviet Union’s southern border to increase the chances that the Soviets would be drawn into Afghanistan, into what Brzezinski referred to as the Afghan trap. And in fact there was actually an active desire on the part of many within the intelligence community to give the Soviets their own Vietnam. And that’s what it became known as at the time. Part of the goal was not only to draw them into Afghanistan, but to hold them there and to destroy them there. So these are all part of the back-story that really was missing when that first exclamation came out of President Carter.

MJ: Then you have the version of events laid out in “Charlie Wilson’s War,” the book and movie, which you take issue with. Could you explain that?

Gould: [Texas congressman] Charlie Wilson came online around 1984 with the idea that the Soviets were never going to leave Afghanistan, so Congress had to increase the supply of arms to insurgents to drive them out. In 1983, a little more than two years after the Soviets had invaded, we took Roger Fisher of the Harvard Negotiation Project to Afghanistan for Nightline to assess the possibility of negotiating the Soviets out of the country. We came back with the story that the Soviets were actually desperate to get out and really wanted to save face, effectively.

MJ: Why was that?

Gould: The big issue really was the insurgency. The Soviets were in Afghanistan primarily because of the insurgency that was flowing from Pakistan and was basically burning schools and burning down power lines and disrupting the ability of the Afghan government to function. When Charlie Wilson actually did in fact get his budget going, and increase the insurgency, it actually held the Soviets there as opposed to driving them out. Charlie Wilson kept the Soviets in Afghanistan for another six years. He didn’t drive them out.

MJ: So if the U.S. hadn’t funneled arms to the insurgency, the Marxist government that was in power in Afghanistan would continue and at that point the Soviets wouldn’t need to be there?

Fitzgerald: The Soviets even prior to their invasion had been trying to convince the Marxists that they should step down from running the country. They told them point blank, you are not capable, you are not diverse enough, your party isn’t broad enough to run the country. And they were letting the United States know. In the summer of 1979, through their emissaries, the Soviet Union let the US know that they wanted the Marxist government of Hafizullah Amin and Nur Mohammed Taraki, to step down. According to the declassified cables the U.S was fully aware of the Soviet’s desire for a political solution. The Soviets expected that they would get cooperation from the United States in setting up a coalition government.

Gould: In fact, the Soviets actually wanted to bring back the king Zahir Shah.

Fitzgerald: The Pakistanis, of course, did not want the king back in Afghanistan because that was Afghan nationalism, and the Pakistanis had been against the Afghan nation from the very beginning. From the very existence of the state of Pakistan in 1947, you have an issue of this disputed territory called Pashtunistan. The Durand Line, which was drawn by the British in 1893, was drawn right down the middle of this 3000-5000 year old Afghan tribal homeland of the Pashtuns. So, now you’ve got 20 million Pashtuns on one side of the border and 40 million Pashtuns on the other side of the border. And since 1893 neither the Pashtuns nor the Afghan government recognizes the border. As a result of that, the situation developed as a constant source of conflict.

MJ: So basically, the Soviets wanted to bring the King back to Afghanistan but Pakistan opposed that idea. And that left them stuck supporting the Marxist government.

Fitzgerald: Yes. When we went back in 1983, about two weeks before we got there, they’d had the annual revolutionary parade for the Saur (April) revolution. And President Babrak Karmal had not been on the viewing stand. So it was a telltale sign that the Soviets were publicly withdrawing their support for him. Roger Fisher [the Harvard professor] came back from the Soviet embassy after meeting with the Soviet specialist on Afghanistan who’d flown down from Moscow and he said, “The Russians are willing to have Karmal step down.”

MJ: I saw a review of your book in the Boston Globe, which said, “In rejecting the precepts of the neoconservatives and their cold warrior predecessors, Fitzgerald and Gould substitute the premises of a pacifist, progressive outlook. Afghans don’t dwell in either of those ideological lands.” To what degree is your book making a case that Afghanistan should be thought of within some sort of framework?

Gould: We have no ideological purpose. [Among other things], the reviewer was criticizing the claim issued by Steve Coll in his book that Benazir Bhutto’s government was responsible for the original creation of the Taliban. That’s not Liz and Paul saying that. That’s actually a quote from Steve Coll’s Ghost Wars. It’s carefully cited that way in our book. Charles Cogan, who was the chief of the Near East and South Asia Division in the [CIA’s] Directorate of Operations, from 1979-1984 and was CIA chief in Paris went on record in the September 22, 2008 issue of World Policy Journal with an article titled “Partners In Time,” where he described the creation of the Taliban as a wholly owned subsidiary of Pakistan’s Inter Services Intelligence, with the purpose of creating a Pakistani-friendly government in Afghanistan.

MJ: What are the main points you hope people will take away from the book?

Gould: What we’ve done is trailed the way that the media did not lay out the fundamental facts about what was really going on. CBS and Dan Rather were specifically cited in the late 1980s for having used fake footage. It’s well documented. That’s how extreme the idea of propagandizing the story got. Not only that, but you have the United States Information Agency actually formulating a whole policy of disinformation–the manufacturing of propaganda in order to promote the idea that the Soviets went into Afghanistan with no provocation and absolutely were hell-bent on getting to the Persian Gulf. You can read about it in Alvin A. Syder’s book, “Warriors of Disinformation.”  If the media had been doing its job, many of these things could not have happened the way they did. It would never have gotten so far out of hand.

MJ: What is the practical use of your book for those who want to keep the U.S. accountable in Afghanistan?

Fitzgerald: Unfortunately, the underlying agenda is still the same as it was in 1898, and that is to secure these trade routes for essentially American and Western interests.

MJ: So if you believe that, how does that affect what you think the US should actually be doing?

Gould: The US during the Bush years blew it. Afghanistan was Washington’s to lose and they lost it.  Can they get it back? The Afghan people are very nationalistic, but they have lost faith in the genuineness of the US effort to help them.  They know that the U.S. is there for its own interests and nothing else. We empowered the warlords and we never actually implemented real security or reconstruction. They still don’t have enough electricity, enough water. The roads are not rebuilt. The whole economy is still very weak. This is the main reason why the Taliban idea keeps popping up as competition. In most cases this is not even an ideological issue, this is an economic issue.