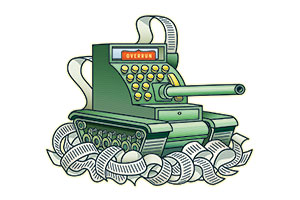 Somewhere in the middle regions of Barack Obama’s Herculean to-do list is a task that’s defeated many of his predecessors: taming the runaway $534 billion Pentagon budget. (And that’s only the official defense budget. Add in things like the supplemental spending on Iraq and Afghanistan, and the total is more like $780 billion.) Earlier this year, Obama and Defense Secretary Robert Gates made headlines when they announced a major crackdown on DOD spending, including a promise to slash several troubled weapons programs. Cynics might point out that Washington pols have been making pledges like that since the Pentagon was created; yet with the economy in crisis and the deficit out of sight, Pentagon profligacy seems like the perfect budget-cutting target.

So where to start? In March, the Government Accountability Office calculated that existing major weapons commitments will ultimately cost $1.6 trillion. A big chunk of that—$296 billion, to be exact—is cost overruns that have already accumulated. That $296 billion, for perspective, is more than the annual military budget of any other nation on the face of the Earth. China, the world’s second-biggest single defense spender after the United States and supposedly such an existential threat that it justifies our exorbitant weapons programs, spends less than a third of what the Pentagon wastes. Our overruns on these weapons to date exceed the entire GDPs of Norway ($256 billion) and Israel ($201 billion).

And if history is any guide, that $296 billion will grow. On average, weapons systems cost 25 percent more than initial estimates, and overruns have risen at an average of nearly 2 percent a year. If that trend continues, the average overrun will reach 46 percent by 2018. Missed deadlines are also SOP: 72 percent of programs are delivered late.

None of this should come as a surprise when oversight of defense contractors has been perfunctory—or even turned over to other contractors. (See “Out of Service.”) Defense firms also ensure that as many congressional districts as possible are addicted to a steady diet of pork; Lockheed Martin claims its F-22 fighter jet—a dud targeted by Gates—has plants or vendors in 44 states. The industry has even stopped defending weapons programs on their merits, instead claiming that cuts would cripple the economy. Lockheed says that the F-22 is responsible for 95,000 jobs and $12 billion in economic activity, but the real jobs figure is likely around half what Lockheed claims. What’s more, a 2007 study based on Bureau of Economic Analysis data finds that other forms of public spending—health care, education, and mass transit—all create more jobs than military spending (below).

Fixing the DOD will take more than a few weapons cuts. But with the White House battling on multiple fronts—health care, global warming, the economy—the big question is how hard Obama will fight to bring real change to the Pentagon.

% of weapons programs on target 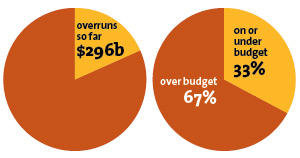 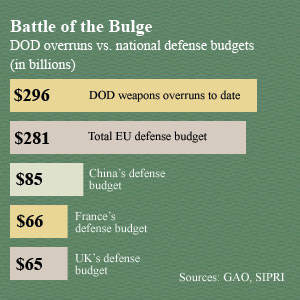 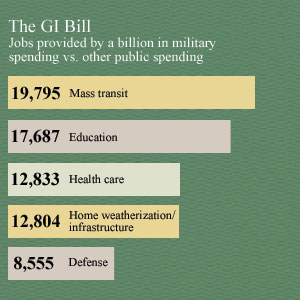 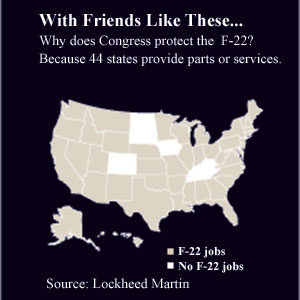