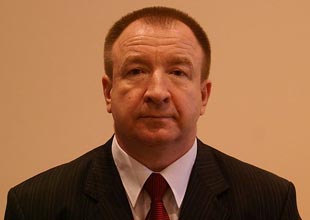 Photo of Igor Panarin from <a href="http://commons.wikimedia.org/wiki/File:Panarin_photo.jpg">Wikimedia Commons</a>.

For more than a decade Dr. Igor Panarin, a Russian academic, has been predicting that sometime around 2010 the United States will collapse, splintering into separate states, some of them controlled by foreign powers. Outside of Russia, no one’s put much stock in his crackpot and stereotype-based theories—until now, that is. Who are the newest members of the Igor Panarin fan club? Tea partiers who’ve rallied against the Obama administration’s policies and blasted the president for pushing a “socialist” agenda. And he’s especially big among tea party activists in Texas, who have hosted Panarin and promoted his work.

In Russia, Panarin, who hosts a weekly radio show, is considered a mainstream expert on the United States. Like Russian Prime Minister Vladimir Putin, Panarin used to work for the KGB. He clearly has the support of the Kremlin, for he teaches at* the school that trains Russia’s diplomats. And since the election of Barack Obama last November, Panarin has found a new audience in America among far right activists, many of whom believe Obama is destroying the country.

According to Panarin, the US will collapse within the next year because of its economic problems and deep racial and ethnic divisions. He changes the details from year to year, but here’s the general gist: the South, “with its Hispanics,” Panarin says, will break away from the union and merge or ally with Mexico. The rest of America will split into several other countries, some becoming the protectorates of other major powers. Alaska, naturally, will go to Russia. The Chinese will take over the West Coast. (Why? Panarin points out that most Californians’ laptops are made in China and that the West has a “growing Chinese population.”) “Five of the poorer central states, with their large Native American populations, and the northern states, where the influence from Canada is strong,” will compose two other countries, he explained in Moscow last year. The Northeast, he says, will fall under the sway of “global capital and finance” based in London—an idea, no doubt, that appeals to those tea partiers who worry about nefarious international forces exerting influence over the US economy.

Since the Drudge Report first highlighted his theories last November, several conservative websites and blogs have featured him. In September, Chuck Baldwin, a perennial far-right presidential candidate on the Constitution Party ticket, observed that Panarin’s predictions of “some sort of break up of the United States in the near future” was a “very realistic probability.” (Columnist and MSNBC analyst Pat Buchanan linked to Baldwin’s article on Panarin.) Joseph Farah, the founder of the arch-conservative website WorldNetDaily, which is famous for promoting “birther” allegations questioning Obama’s citizenship, wrote in December that he wasn’t “buying into Panarin’s entire prediction” but that “there’s something to it.” More than half of the nearly 3,000 WND readers who responded to a poll attached to Farah’s piece agreed that “the US is on course to break up soon, and another 18 percent said they thought the United States wouldn’t break up, but would ‘continue to lose sovereignty to the UN and other global entities.'”

This week Panarin made a trip to the United States. Tea party activists were waiting. On Monday night, the Houston Tea Party Patriots sponsored a speech by Panarin at a local Hilton. The event was titled “Global Crisis: Can the United States Remain United?” Panarin’s hosts, according to a flier promoting the event, want to “make sure” Panarin’s scenario “never happens.” But they weren’t sure it wouldn’t come to pass. In a blog post promoting the event, these tea party activists noted that Panarin’s prediction has been dismissed as a “radical impossibility. But is it?”

Texas was an appropriate place for Panarin to visit. He has said that he views Republican Gov. Rick Perry’s talk of secession, Chuck Norris’ offer to run for president of Texas, and the country’s political battles over immigration as evidence for his thesis. And it certainly doesn’t hurt Panarin’s appeal to the far right that he is deeply critical of President Obama, whom he has compared to Mikhail Gorbachev. Obama, he says, “likes to talk but hasn’t really managed to do anything.” Panarin also talks about America’s “moral” collapse—a theme popular among social conservatives.

After his lecture in Texas, Panarin traveled to Washington, DC, on Tuesday to debate his America-is-doomed theory at the city’s Russian Cultural Center. He gave his usual spiel—that the US is on the verge of breakup—without producing much in the way of evidence or argument. In the audience were a group of conservative activists who dominated the question-and-answer period. One of them, Bob Hoy, a tea party organizer from Northern Virginia, echoed Panarin’s prediction of racial strife, but differed with the Russian on the timeline for America’s impending disintegration. He thought it would be a matter of decades, not months. Hoy said that by 2065, “100 years after Ted Kennedy changed the immigration laws,” America would be no more, due to an invasion of immigrants. Hoy warned that America, “founded by Europeans,” was under siege. “No one wants to live in an integrated neighborhood,” he added, arguing that white people flee “black” areas as soon as they can.

When Panarin polled the audience on whether they agreed with his theory, about 10 of the 50 or so people present raised their hands. With the tea partiers embracing Panarin, he can rest assured that if he falls out of favor in Russia, he’ll have a receptive audience in America—that is, if America still exists.

*Corrected to reflect the fact that Panarin is a professor at the Diplomatic Academy of the Ministry of Foreign Affairs of Russia. He doesn’t run it.