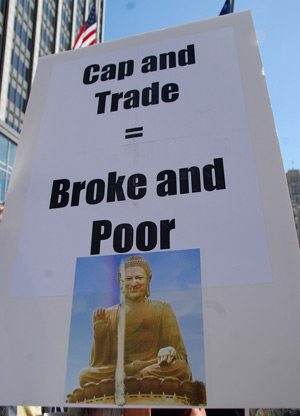 The Tea Party movement earned its stripes at town hall protests this summer by claiming that Democratic health care reform efforts would result in defenseless grannies being hauled before “death panels.” Now the tea partiers have a new target—the cap-and-trade legislation moving through Congress—and new, unlikely victims to protect—the poor.

One of the key recruiting tools in conservative activists’ push against the climate bill is a recent documentary called Not Evil, Just Wrong. The film styles itself as the latest conservative answer to Al Gore’s An Inconvenient Truth. It has no commercial distributor, but instead debuted on an October 18 webcast heavily promoted by social conservative organizations like Focus on the Family and the American Family Association, as well as local Tea Party groups. Organizers claimed the online premiere attracted some 400,000 viewers.

Now the tea partiers are calling for local chapters to host screenings on November 21. An Escondido, California, branch recently invited members to a “record-setting international Cinematic Tea Party,” in terms reminiscent of a social justice rally: “Join the Resistance against the extreme environmentalism that threatens the lives and livelihoods of hundreds of millions of people in the developed and developing world; this is the new road to poverty in America.” (To facilitate these screenings, the filmmakers are selling a “Platinum Party Pack” on their online store, which for $99.95 gets you all the fixings for a rockin’ party: invitations, T-shirts, posters, and even a small red carpet.)

Red carpet notwithstanding, Not Evil is unlikely to garner its creators, a pair of Irish former journalists, any Oscar nominations. The film is poorly organized and rehashes the familiar talking points of climate change deniers—global warming as bad science; climate concerns as hysteria akin to that over killer bees, etc. Pushing those views are the usual suspects, including Patrick Moore, the Greenpeace founder turned nuclear power lobbyist, and Thatcher-era British politician Sir Nigel Lawson.

Where Not Evil differs slightly from the standard denialist script is insistence that cutting carbon emissions will hurt the poor. “For too long, with environmentalists, it’s not enough about people,” says Ann McElhinney, one of the filmmakers, in an interview. “Is it warming? Is it cooling? Who knows? Is it caused by us? There’s even more disagreement about that. All of these things should be about people. We should be fighting for the poor.”

To that end, the film introduces 30-year-old Tiffany McElhany, a stay-at-home mom portrayed as a potential casualty of any environmental legislation that would shutter coal-fired power plants. The filmmakers met her in a hotel lounge in Vevay, Indiana, population 1,600. After they told her about the movie, she replied, “If Al Gore could walk a day in my shoes for a few days, he wouldn’t be doing the things he’s doing.” McElhinney and her coproducer/director husband, Phelim McAleer, had found their star.

In the film, they send McElhany on a Michael Moore-inspired road trip to try to deliver a handwritten letter to Gore at his Tennessee mansion. Naturally, he’s off on a private jet somewhere. The stunt isn’t very funny—but McElheny’s role isn’t to provide satiric commentary. It’s to embody the prosperity that coal and other dirty industries have brought to places like Vevay.

And by all appearances, the McElhanys enjoy an idyllic rural life. Thanks to Tiffany’s husband’s $16-an-hour job making mufflers for Toyota, the family has bought a new house in the country. The film lingers on shots of the family eating pancakes and their daughter playing the saxophone. At one point, McElhany waxes poetically about coal, which fires a power plant just across the river and therefore employs a number of Vevay residents. “Why would anyone want to take that away? It would mean less funding for schools, possibly less schools; it would mean an extreme cost-of-living rise. It would mean kids like my kids wouldn’t be able to play in bands, wouldn’t be able to do ballet class because there is just not going to be the extra money anymore in an everyday household to pay for these things,” she says.

While the filmmakers may be sincere in their concern for low-income people, their film is populated by a cast of discredited characters, some of them familiar from recent corporate astroturf efforts. Case in point: Roy Innis, the head of the Congress of Racial Equality (CORE), whose group participated in a “Stop the War on the Poor” campaign launched by a lobbying firm connected to Alaskan oil interests in order to push for more oil drilling in the US.

Not Evil presents Innis as the leader of a historic civil rights group fighting to reinstate use of the pesticide DDT, whose ban the film blames for the daily malaria deaths of more than 300 African children. But CORE is better known among real civil rights groups for renting out its historic name to any corporation in need of a black front person. The group has taken money from the payday-lending industry, chemical giant (and original DDT manufacturer) Monsanto, and ExxonMobil. Last year, Mother Jones reported that oil and gas interests recruited Innis to serve as the lead plaintiff in a legal challenge to listing the polar bear as a threatened species.

When I asked the filmmakers why they didn’t acknowledge Innis’ conflicts in the film, they claimed ignorance. “We didn’t pay him anything!” McElhinney exclaimed. “Which industry is Al Gore getting money from?” demanded McAleer, who says that whether Innis received payments from Exxon is beside the point.

It turns out that McElhany’s story, too, is more complicated than Not Evil would have you believe. She is by far the documentary’s most compelling character, and seems poised to become a minor heroine to the Tea Party crowd. Yet for all her talk of the bounty that coal has brought to Vevay, when I contacted her for this story she disclosed that her husband was laid off in March and has been unemployed ever since. It appears that a lot of dirty industry jobs have disappeared with no help at all from environmentalists.