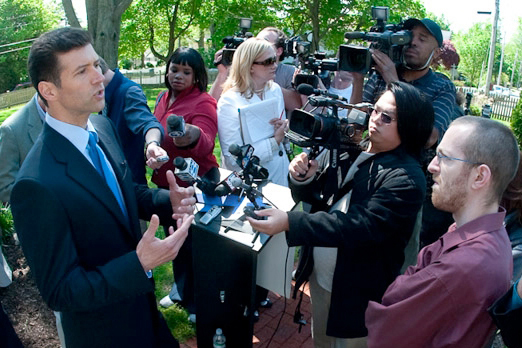 Photo: Merrick For a Change

Merrick Alpert, the only Democratic primary challenger to Connecticut’s embattled Senator Chris Dodd, sounds like a career politician. He is comfortable spinning a yarn about the hands of working class people, the importance of small business, and his staunchly moral lifestyle.

But Alpert, who has been critized as unqualified and too conservative, embraces his outsider status and says he’s the only Democrat who can win Dodd’s seat in November. Although he trails the five-term Senator by more than 30 points according to a recent Quinnipiac poll, Alpert notes that he currently has only one or two percent name recognition in Connecticut, compared to Dodd, who “has been around for longer than the Israelites wandered in the desert.”

This could be Alpert’s moment to surge against Dodd, who was recently deemed “unelectable” by the respected elections predictor the Cook Political Report. Read his conversation with Mother Jones (below the jump) for more on Alpert’s policy stances, Chris Dodd’s failures, and the state’s Republican primary throw down.

Mother Jones: So far, you are the only Democrat who has announced a primary challenge to Dodd. Why did you first decide to launch your campaign?

Merrick Alpert: I was raised by a single working class mom who worked her whole life as a school teacher. If you come from working class people you know what their hands look like, that they’re never completely clean. When I visited her that day, holding her retirement account, she said “Merrick, half of everything I’ve worked for is gone.” That night, [my wife] Alex and I put our children to bed and went into the bedroom to watch TV. And there was the AIG scandal. I watched Chris Dodd, who I have voted for as long as I can remember, do what I teach my kids not to do and I was struck by it. I believe that we’re on the wrong track and we need uncorrupt government. I also believe that term limits are part of clean government.

MJ: Have you promised to set term limits for yourself?

MA: Yes, but it’s presumptuous right now to answer for anything more than one 6-year term. I believe that the maximum I should serve is two terms, 12 years. If you’re down in DC as many days a week as you have to be, and then when you’re back in the state you’re traveling every night, this is a hard job. If you want to stay in Washington and have lobbyists wine and dine you, it’s an easy job. But if you do the job right, it’s tough.

A couple of weeks back, I walked 117 miles across the state of Connecticut to protest the war in Afghanistan, which is wrong from a national security and economic perspective. You see a lot of things when you’re moving at three miles per hour. What I didn’t see was a lot of hope. People said they felt forgotten. In their minds, people link Dodd and Lieberman: two peas in a pod who have been in office too long and are out of touch.

MJ: In just 2006, you were a top contributor to Dodd’s campaign. What changed in the last four years? And why does Dodd need to be removed in 2010?

MA: The Center for Responsive Politics shows that Dodd has taken about $14 million from the financial services industry since 1989. I started seeing massive infusions from AIG and the others. When I looked deeper into it, the trend was even more troubling. In 1999 he voted for the repeal of the Glass-Steagall Act. Then you look at the credit card bill, which was a farce. There’s a huge amount of money flowing into Dodd from the people he’s supposed to protect us from. Why is it that these industries are working so hard to keep this guy in power? They are protecting their investment.

Dodd is also not standing up for his constituents on health care reform. There needs to be a meaningful discussion about a single payer system and at the very minimum, there should be a public option that covers the uninsured. I cannot fathom that we would settle for anything less than that.

MJ: Your former boss Jon Pelto suggested earlier this year that you are unqualified for the Senate. How do you respond?

MA: He hasn’t seen me in 25 years, so he doesn’t know me very well. If he knew me, he would know that I’ve been out there, working on the Clinton/Gore effort, working for Al Gore when he was Vice President, I’ve served in the military, I’ve traveled to 30 countries, and I’ve put a small business together, including a significant international component of that business. You also have to look at ethics and morality. Judge me as a husband and father. I have three kids and I’m married to a Hispanic immigrant from the nation of Colombia.

One thing that Dodd is certainly not and I am, is electable. The recent Quinnipiac poll was shocking from a Democratic perspective. There is 1-2 percent name recognition for me, but nearly 25% of the Democratic party already wants me. Dodd has been around for longer than the Israelites wandered in the desert and people in Connecticut either don’t want Dodd or won’t commit. The people who know him the best want him the least. Right now, people don’t want a career politician. People want someone like themselves, who will come in and bring a fresh perspective.

MJ: Which Republican candidate would you most like to face in 2010?

MA: I’d be happy to go after any of them. They’re taking turns seeing who can be further right. They stand up saying Afghanistan is a good idea and health care reform is a bad idea. As far as I’m concerned, you can pair them all together and I’ll run against them all.