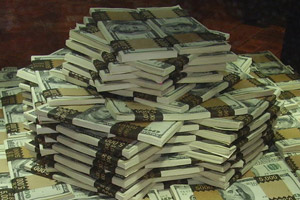 Among Bank of America’s 50 million customers, Pierre Falcone was far from ordinary. An infamous global arms dealer who unlawfully sold weapons to Angola for its civil war and an international fugitive, Falcone was convicted of tax fraud and illegal arms dealing in 2007 and 2009 and is currently serving six years behind bars. Yet for nearly two decades, Falcone and his relatives freely used 29 different bank accounts to funnel at least $60 million into the US from secretive havens like the Cayman Islands, Luxembourg, and Singapore, and from shell corporations and secret clients. Despite his criminal record and worldwide notoriety, Bank of America essentially treated him like any other depositor.

The story of how a criminal like Falcone used Bank of America—which later received billions in a taxpayer-funded bailout—and the US financial system to advance his criminal activities appears in a new report by the Senate investigations subcommittee, led by Sen. Carl Levin (D-Mich.). In revealing the operations of Falcone and others—in most cases for the first time—the report offers a lurid primer explaining how big banks, powerful attorneys, influential lobbyists, and a host of other businessmen in this country help launder dirty foreign money.

The report highlights several gaping holes in American money laundering and corruption laws, including an exemption made by the Treasury Department in 2002 to the Patriot Act. “Foreign officials still get access to our financial system at times because US officials aid and abet their actions,” Levin told reporters on Tuesday. The 325-page report sets the stage for a hearing Thursday featuring US enforcement officials as well as some of the main players who abetted secretive individuals like Falcone and the corrupt former president of Gabon, the late Omar Bongo.

Although Congress has passed significant anti-money laundering provisions in the past decade, the law still contains major gaps through which corrupt foreign individuals like Falcone and Obiang can move their cash. For instance, due to the Treasury’s Patriot Act loopholes, US realtors and escrow agents aren’t required to ask who is sending funds to them or to scrutinize or disclose whether the sender is on an international list of “politically exposed persons” (PEP) who have been red-flagged for dubious activities. That exemption, the report shows, allowed Teodoro Obiang, the high-flying son of the despotic president of Equatorial Guinea, to use realtors and escrow agents as conduits to dodge US law—ultimately enabling Obiang to buy a $38.5 million jet and a $30 million house in Malibu.

Obiang also secretly laundered millions via two Beverly Hills-based attorneys, Michael Berger and George Nagler. Because attorney-client and law office accounts lie outside the scrutiny of dirty-money laws, the two attorneys were able to move his money by creating multiple shell corporations with names like Beautiful Vision, Unlimited Horizon, and Sweetwater Malibu. Nagler devised one such corporation called Sweet Pink Inc., and Obiang’s then-girlfriend, hip-hop star Eve Jeffers, was named president and CFO. In total, Obiang brought $110 million into the US using these under-the-radar practices, the report says. In turn, he feted his US associates with access to exclusive events, like the Playboy Mansion’s 2007 “Kandy Halloween Bash,” after which Berger emailed Obiang to gush, “I met many beautiful women, and I have the photos, e-mail addresses and phone numbers to prove it.”

In some cases, corrupt officials didn’t need shell corporations or sneaky lawyers: big American banks proved helpful enough. Peppered throughout the subcommittee’s report are stories of banks like Wachovia, Bank of America, and Citibank turning a blind eye—or failing to notice—the shadowy sources of money pouring into their accounts. There was arms dealer Pierre Falcone’s decades-long funneling of millions through Bank of America. The New York office of HSBC, the report says, handled funds for a private Angolan bank yet failed to investigate the bank’s officers and clientele, a number of whom appeared on the PEP list. The most glaring gaffe, however, belongs to Citibank—another major bailout recipient—and its response to investigators’ concerns about its management of Obiang’s accounts.

Between 2002 and 2006, Obiang wired more than $37 million into the US through Citibank. Some of those funds landed in Obiang-related accounts at other banks, while others went directly to places like a Beverly Hills Audi and Porsche dealership, a US yacht company, a luxury vacation company, and a private jet service. Obiang even used wired funds to pay off his American Express bills of around $2.5 million. But here’s the kicker: Although Citibank was aware that Obiang was on the PEP list and that he was using Citi to wire dirty money into the US, the bank informed the investigation’s subcommittee that it has no plans to beef up its safeguards against money laundering. Why not? “Identifying, freezing, and investigating these wire transfers,” Citibank told the subcommittee, “would generate too much work for its anti-money laundering staff.”

And when lawyers and big banks won’t do, a well-connected lobbyist will suffice. As the report describes, the late Omar Bongo, former president of Gabon and another PEP-listed figure, used an American lobbyist named Jeffrey Birrell as an agent to funnel money into the US and attempt to buy military vehicles for his regime. Bongo, who granted himself indefinite term limits and squandered Gabon’s oil revenues, used Birrell’s bank accounts to move nearly $18 million, with which Birrell tried to buy three US-made armored cars, three more US automobiles, and six C-130 military transport planes (he even got US government authorization to purchase the planes). Birrell also helped Bongo launder millions of dollars by funneling them through US accounts and then sending those same funds to banks in Malta and Belgium linked to Bongo.

Lawmakers hope the investigation subcommittee’s meticulous report and Thursday’s hearing will prompt new crackdowns on money laundering exploits like those carried out by Obiang and Bongo. The report lays out a series of proposed reforms, from tougher oversight of lobbyists to improved disclosure rules, aimed at staunching the flow of money in to the US from corrupt foreign figures. The impetus for the investigation, Levin told reporters, came in part from concerns that terrorists could use the same loopholes to move their money into the US. Levin added that he hopes the committee’s revelations will also pressure the Treasury to revoke the Patriot Act exemption for realtors and escrow agents.

With financial regulatory reform currently moving through Congress, Levin may consider adding anti-money laundering provisions to the Senate’s reform bill. He told reporters that banks “are doing a lot better” combating corrupt foreign funds, but said plenty of work remains to be done to prevent the kinds of cases his subcommittee unearthed. “We’ve got to lead,” he said, “on the issue of corrupt money and money laundering.” And the report’s account of big Wall Street players like Bank of America and Citibank and their failure—or refusal—to block the flow of dirty cash from abroad certainly won’t ease the public’s distrust.