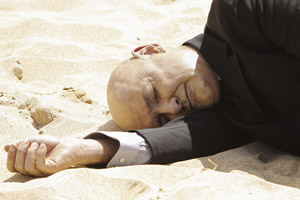 Lots to discuss after last night’s episode of Lost, which was filled with puzzling clues about “candidates” and names scratched on an underground ceiling. Plus, we got the numbers, a broken Sawyer, alternate-timeline Locke, and a creepy ghost kid. Below, MoJo staffers do their best to make sense of a jam-packed episode:

Nikki Gloudeman, New Media Fellow: So…last night’s episode was crazy.
Samantha Schaberg, Administrative Assistant: What I’m most curious about is the cave. And specifically, if the Dark Man (Locke) crossed off the name Ford to make a point with Sawyer, did he make the decision for him basically to turn down the candidacy?
Nikki: And why those numbers?
Jen Phillips, Assistant Editor: Those weren’t the ages they were when Jacob made contact, were they?
Nikki: Ooh, maybe. I’m trying to remember what numbers were with what people.
Jen: Me too! I’ll have to look up later.
Nikki: You just know multiple Lost fans are scrutinizing a screen shot as we speak.

Jen: So from what does the island need protection?
Samantha: Nothing, Locke makes a great point, nature and earth and all that goodness will be there regardless of man’s decisions for it.
Nikki: There seems to be something bigger than this island, a god-like force that we haven’t yet seen.
Jen: Is the strawberry blonde kid a god? What do you think he was? I figured kid Jacob come back to life.
Nikki: Yes, I also assumed Jacob come to life. I think he can possess bodies, which would explain all the “ghosts” from season pasts. They were actually bodies possessed by the spirits of the island.
Jen: But Ben Linus saw his mom, who never reached the island having died in childbirth. Maybe it can create bodies?
Nikki: Good point. Maybe it can create bodies from the consciousness of the island inhabitants? So because Ben was on the island, his mom was there too…via his consciousness? That might make no sense.
Jen: Well, that’s Lost for ya.

Samantha: I wonder what happens to the ‘landed in LAX’ Sawyer when his ‘crashed’ persona comes back to the real world.
Nikki: I think the sentimental undercurrent of this season is that we are shaped by the people around us. So Sawyer could become a totally different person if he meets good people. Like Locke, who is now happy thanks to the guidance of Rose and Hurley (and possibly Jack). One cool thing from last night: that Fake Locke possessed by MIB said “You can’t tell me what I can’t do.” Just like real Locke did in the past. So was pre-crash Locke already channeling the dark spirit?
Jen: Maybe Locke was always the easiest to possess, being the weakest and saddest when the plane crashed.
Nikki: That definitely makes sense. He certainly seems to have been targeted by MIB very deliberately.

Jen: So back to the ceiling. We didn’t see Claire’s name, right? Because she seems pretty darn protective this season.
Nikki: Don’t think so. All I remember for sure is Sayid, Jack, Sawyer, Hurley…
Jen: And Kwon. There’s one spot open, as there’s six numbers in the sequence I think. And they’re not telling us who it is.
Nikki: Oh, you are so right. That’s sneaky.

Nikki: Ok, one other point: Yet again they harped heavily on fate v. free will. And made it pretty clear Jacob=fate, MIB=free will.
Jen: Speaking of free will v. fate, do you think that the alternate timeline is one made of characters free will, while island timeline is fated?
Samantha: Oh, I like that Jen.
Nikki: Free will with the knowledge of what happened on the island, such that free will is exerted to better ends.
Samantha: Subconsciously, maybe.
Jen: So why is the MIB “trapped”?
Nikki: He’s trapped by fate, perhaps? And he can’t make the choice to leave? But if enough people exert their free will, it can overcome fate—which is why fake Locke needs everyone with him?
Jen: I just don’t get if he can turn into black smoke and different people, why can’t he leave the island on his own? And he said he was a man once, which means…?
Nikki: Hmm yes. It is strange. I’m wracking my brain, but can’t figure it out.
Jen: I think we don’t have all the pieces yet. There are “rules” that we haven’t been let in on yet, nor who made them, and who died and made them smoke monster.

Nikki: Ok before we wrap this up…favorite moment from the night? I like when Locke walked in on Sawyer, drinking on the floor. It felt so ominous and creepy. The whole episode was fantastically directed/shot, actually.
Jen: Yes, extra points to directors/writers for this episode. I liked Ben Linus, European history teacher, resentful coffee maker.
Samantha: Yes, that was great. I loved Ben Linus as the teacher.
Jen: So perfect, right? And yet, I sympathize with him. I feel like I make a pot of coffee every morning in the office.
Samantha: I liked how MIB Locke simplified things in the cave with Sawyer, explaining Jacob and how he’s bringing them there for no reason to protect the island.
Jen: But even with so much heavy lifting, there were fun moments. I liked Locke’s funeral, and the pilot’s “weirdest damn funeral I’ve ever been to.” I did like the answers from last night. But I feel like there are still lots of questions to be answered.  And I don’t know if we’ll get them all this season.
Nikki: I was worried about that after last week. But after last night, I started feeling more confident. They’re at least making it clear they will answer these questions: the numbers, who Jacob/MIB are, why and how the castaways were chosen, and what the island is. And they already answered the smoke monster question. And I think we’ll get an answer on the spirits/whispers too. So that’s a lot of the big ones.