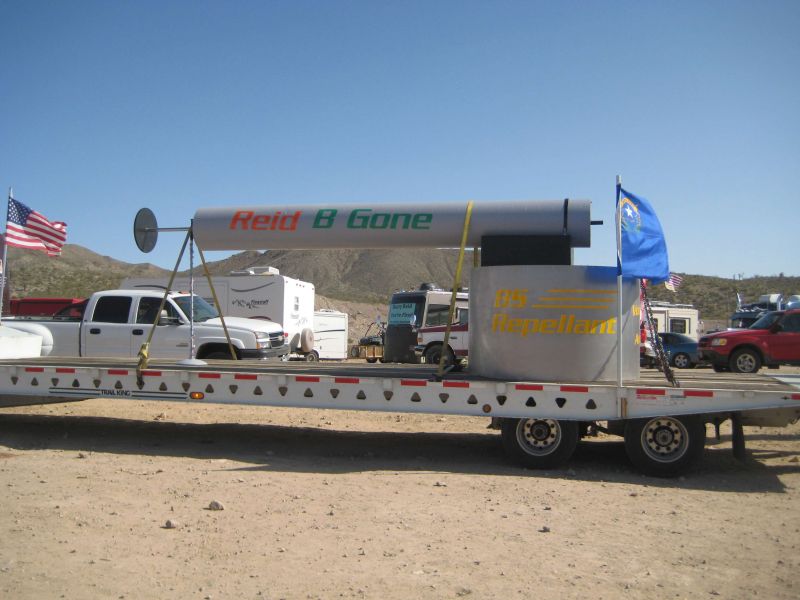 [Ed note: You can find Tim’s earlier installments in this series here, here, and here.]

After the kicked-up dust had settled in Searchlight (much of it on my glasses) and most of the RVs and pickups had started the long crawl back to civilization or suburbia, a few stragglers stuck around, in no real hurry to make an exit. I gravitated toward a group of friends from Arizona armed with a stack of signs urging a crackdown on illegal immigration. Two of them puffed on fat cigars—a nightcap on a victorious day.

I started asking questions just to get them talking, and it was clear they were used to arguing with each other. One of them, who was sporting a Crocodile Dundee-style desert hat, lobbed the first grenade. The problem with today’s conservatives, he said, was that they wasted all their time talking about gay marriage and abortion, two things he couldn’t give a hoot about, personally. “That’s between a woman and her doctor,” he said. “And marry whoever you want.” At this his friend jumped in, “Well, it should be up to the states.” “Right, the states,” said Dundee. “Well, I guess that makes me a real bad conservative,” he added with a laugh.

I listened for a little while longer—about Abraham Lincoln’s socialist influences, mostly (Lincoln was apparently a big reader of Karl Marx)—and then left them to their cigars.

It struck me at this big rally in the desert that there was a whole lot of sitting around doing nothing. For the average Tea Partier the schedule of events went something like this: Arrive, look at the t-shirts and buttons for sale, inspect the signs, and sit. And sit. And sit. It was more than a little ironic, then, that Joe the Plumber exhorted the crowd to get up “off your La-Z-Boys” and make their voices heard; he meant simply that they should keep on going to events like these, but it’s at events like these where they mostly sit around in their lawn chairs. A step up, calorically, from La-Z-Boys, but only a modest one.

The overwhelming majority of people I spoke with at the rally were polite, which I can attribute in part to the fact that this was their turf. They also found me to be polite apparently, which I suspect speaks to low expectations on their end: I’m a journalist AND I live in San Francisco and yet I don’t breathe fire (working on it!); go figure. Now it’s back on home, where I’ve promised a few suspicious interviewees that I’ll investigate rumors that my congresswoman is on friendly terms with labor unions—I’m sure there’s nothing to it, but if there is, I think it could be Madame Speaker’s Waterloo.

Read my earlier dispatches from the Showdown in Searchlight (in chron order) here, here, and here.