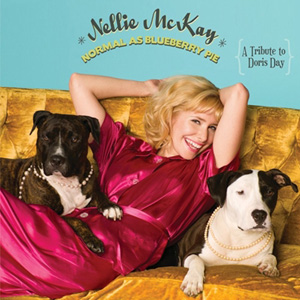 Have you heard Nellie McKay‘s tribute to Doris Day, Normal As Blueberry Pie? I had the pleasure of seeing her perform songs from this and other albums at the Great American Music Hall in San Francisco last week. Here are 10 little observations:

1. When McKay first steps out onto the stage, her strange charisma reaches me at the back of the room, at the table where I sit drinking. I sense that something special is about to take place, something unforgettable. I start to grin like an idiot, before anything has even happened. She is surely going to unravel us with her sweet and satirical musical persona.

2. Beautiful, somewhat unhinged, raveling and unraveling, McKay appears both iconic and eccentric in youth. Her digressive flair dazzles as she moves from a sweet Doris Day number to “Sari,” her piano-driven rap song, about three-quarters of the way into which she forgets a line of lyrics, laughs gamely, and simply screams, “Die motherfucker!” It calls to mind McKay’s quoting Greta Garbo describing Day’s curious allure: “Anyone who has a continuous smile on her face conceals a toughness that’s almost frightening.”

3. The girl’s got pizzazz! A gift for linguistic play, a dynamic intellect, serious musical ability and style. No matter the direction this young woman veers, we’re held in enchantment by that loverly voice. It guides us along.

5. McKay has written earnestly about Doris Day for the New York Review of Books, showing critical insight into her career and demonstrating what, as an iconic figure in popular culture, Day stood for: “What she possessed, beyond her beauty, physical grace and natural acting ability, was a resplendent voice that conveyed enormous warmth and feeling.” In concert, the sincere commitment of McKay’s homage disarms the intellect—especially as the word “resplendent” describes McKay’s voice as well: supple and warm, gleaming brilliantly as it sanctifies (an ambling, almost humble “Sentimental Journey“) and subverts (her own “Mother of Pearl”).

6. Nellie sings “Dig It!” An old-fashioned song about old-fashioned dances: I never could sing mazurkas / They’re poison to me, mazurkas / But if it’s to be mazurkas / I ain’t hep / To that step / But I’ll dig it! There’s nothing quite like hearing McKay pronounce “mazurkas.” It’s funny, it’s silly, but at the same time I’m gripped by the fullness with which she gives herself to the saying, the singing of this vanished word.

7. I’m getting a little drunk, so my Sidecar is starting to reflect McKay’s musical set: the rim of the glass, sugared—a sunny, tart lemon wedge fastened to its lip, a bright red cherry at the bottom, soaking in a potent brew of stinging sour mix and soothing brandy.

9. Having one’s sense of orientation ambushed in the midst of a songbook standard. Left reeling moment to moment by some stormy change of register on McKay’s part: Singing “A-Tisket, A-Tasket,” she suddenly indulges in what strikes me as a down-and-dirty moment of Dusty Springfield-like vocal phrasing, calling immediately to mind that singer’s legendary versatility. Ella Fitzgerald, too, of course, who Doris Day idolized.

10. Moments that begin as irreverent anecdotes—Nellie spotting Kitty Carlisle dressed in black and yellow at a Broadway show, and describing her as looking like “a fabulous bumblebee”—become, a moment later, trembling magic: At the front of the stage, she sings a haunting tune in a high Carlisle soprano. It’s devastating and delicate, moving and deeply pleasurable, and done without a trace of irony.