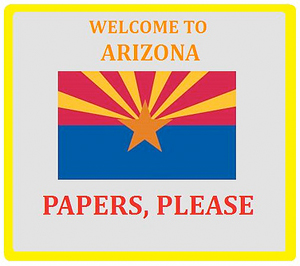 Right-wing conservatives retrogressives in the American West have been so preoccupied with illegal brown people, that they forgot to worry about the legal ones. So says a new analysis by Public Policy Polling, anyway: Since the passage of Arizona’s draconian “Papers, Please” law, likely voters in Arizona and Colorado have shifted their support to the Democratic candidates in a “very substantive way,” bucking the alleged national mood of Obama-hatin’. That shift is largely due to energized (and probably angry) Latino voters. According to Tom Jensen, PPP’s director:

When we polled Colorado in early March Michael Bennet and Jane Norton were tied. Last week we found Bennet with a 3 point lead. One of the biggest reasons for that shift? Bennet went from leading Norton by 12 points with Hispanic voters to a 21 point advantage. That large shift in a Democratic direction among Hispanics mirrors what we saw in our Arizona Senate polling last month– Rodney Glassman went from trailing John McCain by 17 points with them in September to now holding a 17 point lead.

Hispanics in the Mountain West are leaning much more strongly toward the Democrats since the Arizona law was passed. The big question then becomes whether there are white voters who are going to go Republican this fall who wouldn’t have if that bill hadn’t been passed. We don’t see any evidence of that happening yet- Bennet and Glassman are both doing better with white voters than they were before as well, although not to the same degree that they’ve improved with Hispanics.

I called up Jensen to shed some more light on these developments. He said that yes, indeed, Democratic Sen. Michael Bennet is leading in Colorado, and in Arizona, challenger Rodney Glassman (who’s still a longshot), who once trailed John McCain by 30 points, has cut that margin in half. (McCain’s popularity, the poll says, has “plummeted” in Arizona.) Has Jensen ever seen anything like this? At this stage in an election cycle, he says, “Most movement in races don’t have that much to do with the candidates, they have to do with a change in the national political climate.” What’s weird, though, is that “there hasn’t been a movement in that political climate towards Democrats. They’re not doing better; they’ve largely stayed where they are.”

The takeaway, according to Jensen: At least in these races—and perhaps later on in Nevada and New Mexico—”If the immigration bill is having any effect, it’s to shift Latino voters in large numbers to the Democratic candidates”—but there’s no concurrent migration of more white voters to other side.

In short, nativists and neo-Know-Nothing candidates may succeed in squeezing past fellow conservatives retrogressives in primary races, but come November, they may taste the pain, courtesy of the minority voters threatened by their policies. That is, of course, unless the right succeeds in rounding up or scaring off all those voters before election day.