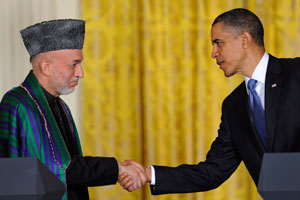 As the White House no doubt has learned in its recent dealings with Hamid Karzai, the Afghan president can be uncomfortably unpredictable. He sprang his latest surprise on Sunday, forcing out two top security officials and Washington favorites who are widely viewed as among the most competent in Karzai’s troubled government. And seasoned Afghanistan watchers warn their ousters could spell trouble for the Obama administration’s counterinsurgency strategy.

The departures came after an attack last week targeting Karzai’s highly publicized “peace jirga”—a conference meant to pave the way toward political reconciliation with the Taliban. Militants were able to get close to the highly secure event, which was attended by more than a thousand delegates and international dignitaries, by posing as a couple with an infant (instead of a baby, the attackers had swaddled weapons). One of the male militants was dressed in a burka, a disguise that apparently allowed him to avoid being searched for weapons or explosives by security. The attack was unsuccessful. Still, the too-close-for-comfort incident proved an embarrassment to Karzai, who was later said to have lost confidence in his intelligence chief, Amrullah Saleh, and his Interior Minister, Hanif Atmar, whose ministry is responsible for Afghanistan’s police and internal security forces.

But given that bursts of violence have become the norm in Afghanistan and the attack caused no casualties, the removal of Atmar and Saleh—who officially “resigned”— seemed peculiar, if not potentially counterproductive. It certainly caught Western officials off guard, raising fears that the shake-up could impair efforts to pacify the country and complicate the Obama administration’s counterinsurgency campaign, even as a major offensive targeting the Taliban stronghold of Kandahar is poised to unfold. Commenting on the news, Defense Secretary Robert Gates trod carefully, describing the firings as “an internal matter.” But he did allude to how highly valued Atmar and Saleh are to US officials. “We have a number of capable ministers we are working with, and I would just hope President Karzai will appoint in the place of those who have left people of equal caliber,” Gates said.

Atmar and Saleh are considered among America’s closest Afghan allies. (Since his days as an aide to the legendary mujahideen commander Ahmed Shah Massoud, Saleh has developed a close rapport with his counterparts in the CIA.) In a government rife with crooked officials and pols, they were widely viewed as trustworthy—and in their absence, it’s anyone’s guess what will become of the progress made under their tenures.

Since taking over the ministry post in 2008, Atmar has made strides in cracking down on corruption and reining in the country’s private security industry, which is licensed through the Ministry of Interior. When he visited Washington last month with Karzai and an entourage of cabinet level officials, I had the opportunity to meet him at the State Department one morning. He touted his ministry’s anti-corruption successes—which include the prosecution of more than 200 members of the Afghan police force for corruption-related offenses—and described some of the steps his agency was taking to foist accountability on security operators. “The level of tolerance of misconduct when it comes to these organizations is zero,” he said. This was more than just empty rhetoric, considering that days earlier Atmar had temporarily suspended two large security outfits responsible for gunning down civilians.

Karzai’s spokesman, Waheed Omar, has insisted that the resignations of Atmar and Saleh were due exclusively “to the failure to prevent the attack” and that “nothing of the past was in consideration.” But there’s more to the story than that. Both officials have reportedly disagreed with Karzai over aspects of his Taliban reconciliation strategy—the Afghan president’s signature initiative, which he has been pushing on and off since he first took office. And both men have made powerful enemies.

In addition to his doubts about Karzai’s plans to bring the Taliban back into the political fold, Saleh has been an outspoken critic of Pakistan, in particular its role in providing sanctuary to militants who use the country’s tribal areas as a staging ground for deadly attacks within Afghanistan’s borders. Pakistan’s intelligence service, Inter-Services Intelligence (or, ISI), has “constantly asked for the removal of Saleh ‘to improve relations,'” explains a Western official who advises Afghanistan’s Interior Ministry. “Some would see this as political and aiming to improve relations with Paks as part of the reconciliation.” He adds, “Atmar has lots of enemies—successful anti-corruption and personal incorruptibility doesn’t win friends in Afghanistan.” Among them, he says, were members of Karzai’s “palace clique” who “always fear non-corrupt powerful Pashtuns.”

In the end, Karzai may have dealt a self-inflicted blow to his high-stakes effort to forge a reliable central government whose influence extends beyond Kabul’s city limits. And the leadership change may also set back the work of NATO forces that are trying to prevent Afghanistan from slipping into a violent tailspin.

Ousting Atmar and Saleh, the adviser remarks, “has turned a pathetic attack into a success beyond the dreams of ISI and the Taliban as they have disposed of two of their most effective enemies.” He describes Karzai’s move as a “spectacular own-goal that will make the whole COIN [counterinsurgency] idea that much more difficult as it is not easy to see where they will be able to find really good replacements for either Atmar or Saleh.” At the Ministry of Interior, he noted, the removal of Atmar “will be potentially disastrous” for a range of initiatives. “Omens,” he says, “are not good.”