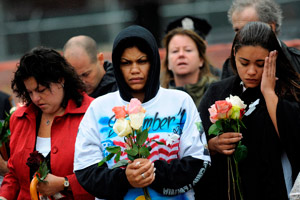 Ever since the terrorist attacks that left nearly 3,000 people dead, September 11th has been a day of national mourning, a time to set politics aside and focus on honoring the victims. But this year, a coalition of tea party and assorted conservative “liberty” groups have other plans. They intend to commemorate the 9th anniversary of 9/11 with a political rally on the National Mall, less than three miles from the Pentagon, where American Airlines Flight 77 crashed.

Unite in Action (UIA)—an umbrella organization for a host of other conservative groups that has ties to Glenn Beck’s 9/12 Project—is planning a four-day extravaganza of “patriot” events in DC, marking the anniversary of the massive tea party rally held in Washington last September 12th. On the agenda for the 11th is a “9/11 Memorial and Unity Rally,” which UIA describes as a “call to action rally focused on the social issues threatening our freedom.”

The organizations involved are far from a neutral bunch. UIA’s advisory board includes the Oath Keepers, a militant group that has pledged to take up arms against the government if it comes down to it. (On its site, the group is advertising the 9/11 event as a “Defend the Constitution” rally.) There’s also ResistNet, a social networking organization for self-proclaimed patriots that has been heavily involved in anti-immigration campaigns. And there are veterans’ groups with ties to the Constitution Party, whose goal is to return American jurisprudence to its “Biblical roots.” While UIA claims it’s holding a “unity” rally, the event will be preceded by signmaking parties—a staple of protest marches.

For UIA, memorializing the attacks almost seems like an afterthought. None of the proceeds of its “March on DC” events appear to be going to organizations for the families of the victims. (“All revenues raised before and during the 2010 March On DC and Liberty Expo will be used for the stated purposes of UIA,” says the group’s president, Stephani Scruggs.) And the 9/11-themed portion of the agenda merely consists of a memorial service at the Washington Monument—at 7 a.m., the morning after organizers have scheduled a host of VIP cocktail parties, benefit concerts, and a banquet, slated to run late into the night, virtually ensuring that memorial turnout will be slim.

According to the “March on DC” website, the memorial service will feature “Family members of the Fallen Victims, First Responders including; Fire Departments and Fire Rescue, Members of the NYC Police Department, Search and Rescue Personnel, etc.” But Sgt. Carlos Nieves, a spokesman for the NYPD, says the department is not sending a single official, though he acknowledges that the department wouldn’t know if retired officers were planning to participate. When Mother Jones asked Scruggs for the names of the speakers representing the 9/11 families and victims, she declined to provide any, responding in an email:

Our speakers list has not yet been announced. We are in communication with a lot of these families and to protect their privacy and respect the sacred nature of this event, we have not yet decided whether we will publically release the names of the victim’s families who are participating until the day of the event. We appreciate you respecting their privacy as well.

Contacted by Mother Jones, individuals and organizations representing many 9/11 families said they had never heard about UIA’s march or memorial.

Jay Winuk’s younger brother, Glenn, was a volunteer EMT who died when the south tower of the World Trade Center collapsed. In response to the tragedy, Winuk created MyGoodDeed to honor 9/11 victims through volunteer and charitable work. He was instrumental in persuading Congress to designate 9/11 a national day of service. Winuk, whose board includes dozens of 9/11 groups and victims’ family members, says he hasn’t heard from “March on DC” organizers.

The same goes for Debra Burlingame, sister of the pilot whose plane crashed into the Pentagon and one of the best-known faces of the 9/11 families. Along with Liz Cheney, Burlingame created Keep America Safe, a conservative organization focused on homeland security. While Burlingame’s political leanings would seem to make her an ideal invitee to UIA’s memorial, she, like Winuk, was unaware of the march.

Brian Richardson, a social worker and spokesman for the organization Families of September 11, wasn’t surprised to hear about UIA’s march, though he also said his 2,000-plus member group hadn’t been contacted about it. Certain tea party groups “have tried to take their political stance and connect it with 9/11,” he says. “That for us is a stretch.” He says Families of September 11 and the members it represents believe that any 9/11 memorial should be distinct and separate from any political event. “Our position is that in regard to commemorating the attacks, they should be nonpolitical, respectful, and honor the people who were lost. They should give families a chance to express their loss and no more than that.”

While the 9/11 families have been reluctant to criticize UIA’s march directly, some tea party activists are less circumspect. They say they’re uncomfortable with the notion of holding a controversial and politically charged event on a national day of mourning. “I wouldn’t have a march on 9/11 if someone held a gun to my head,” says Robin Stublen, a tea party activist in Florida. “That’s a day of remembrance. You don’t protest. Everyone in this country remembers where they were on that day, and no one was marching.” Tony Shreeve, a Tennessee tea party organizer, agrees. “9/11 should be a day of remembrance and prayer,” he says. “I think it’s kind of disrespectful [to hold a march that day].”

Others worry that the march will further tarnish the movement’s reputation. Robert Jeffery, a Northern Virginia tea party activist, says that after the recent flap involving Tea Party Express leader Mark Williams and the NAACP, some activists in his world fear that marching on 9/11 would “tar them as racist or anti-Semitic because of the Arabs in the area.”

Scruggs admits that some people have questioned the timing of the rally. But she insists the UIA march poses no conflict with the spirit of the day. If anything, she says, it complements it. “When we explain what we are doing and our intent—that this is not a rally against anything, but for something, they are in complete agreement,” she says. “This rally is intended to unite Americans to preserve freedom. The 50+ Unite In Action Advisory Council member organizations and the hundreds of thousands of patriots they represent agree: The greatest tribute to those who lost their lives for freedom is to unite together and commit to defend it.”