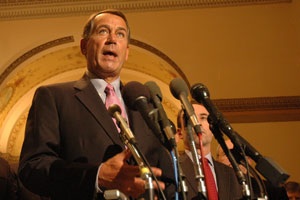 With their 48-page “Pledge to America,” House GOPers have called for tax cuts for the wealthy and downsizing government—and for repealing President Obama’s major initiatives, such as his health care overhaul. The campaign booklet also contains what might perhaps be a more ambitious promise: to reinvent the political culture in Washington and end the business-as-usual wheeling and dealing in the nation’s capital. But on Wednesday—the day before he was scheduled to deliver a speech called “Reforming Congress in the People’s House”—Rep. John Boehner (R-Ohio), who will likely become House speaker if the Republicans triumph on November 2, would not say whether the GOP will do anything about lobbyists or lobbying, should he and his comrades gain control of the House.

In the preamble to the “Pledge,” Boehner and the Republicans present a fundamental promise: “We pledge to make government more transparent.” The document goes on to state,

The most important decisions are made behind closed doors, where a flurry of backroom deals has supplanted the will of the people. It’s time to do away with the old politics: that much is clear.

But what would this mean for lobbyists and the future of lobbying on Capitol Hill? On Wednesday morning, at a House GOP leadership press conference, we asked Boehner if he and the Republicans were to control the House would they disclose their meetings with lobbyists and reveal what is discussed in these behind-closed-door sessions. Boehner replied:

Think about how the House has worked over the last couple of years. There are about five members who decide what the outcome of the bill is going to be, the whole process. Five members. And there are 430 of us who sit on the sidelines. I just think it’s time for all members to have a chance to represent their constituents when laws are being created in the US House of Representatives.

This certainly was a non-responsive reply. He said nothing about lobbying or lobbyists. He didn’t even say anything about transparency. He was merely griping about the internal workings of the House leadership.

This was not a shocker. Boehner has long cultivated ties to lobbyists and big business. In 1996, he infamously handed out checks from Big Tobacco to Republican lawmakers on the House floor. Earlier this month, the New York Times reported that Boehner is especially cozy with certain powerhouse corporations, such as Google, Citigroup, and RJ Reynolds. K&L Gates, a powerful lobbying shop and the Investment Company Institute have hosted fundraisers for Boehner. This election season, Boehner has raised $4.5 million, third-highest among all House candidates. He’s also spent the third-most, at $3.7 million. His top donors include American Financial Group ($38,900), American Electric Power ($28,450), and health insurer Blue Cross Blue Shield ($15,500). Lobbyists and corporate political action committees also have poured funds into his Boehner for Speaker committee. Over his career, Boehner has reeled in more than $21 million, with Big Finance—in particular, insurance companies, securities and investment firms, and commercial banks—among his top donors.

According to excerpts of his speech released Thursday morning, Boehner will say, “Reform should be an ongoing and inclusive effort. I don’t have all the answers, and wouldn’t pretend to. I welcome ideas and helping hands from any lawmaker, expert, or citizen about how we can make this institution function again.” The released excerpts do not refer to lobbying and campaign finance reform.

Meanwhile, Democrats are scoffing at Boehner’s “reform” push—and increasingly targeting him as part of their 2010 campaign strategy. On the White House blog, White House communications director Dan Pfeiffer says, “When Rep. Boehner and his House Republican colleagues unveiled their ‘Pledge to America’ last week, one of the document’s most striking omissions was its lack of a plan to increase disclosure and curb the influence of special interest lobbyists.” The Democratic National Committee put out a video, titled “Now, That’s Funny,” that highlights Boehner’s connections to special interest lobbyists. The script reads:

Democrats are hoping to turn Boehner into a piñata for the elections. A Democratic Party official tells CNN, “There will be a full-fledged effort to define him in this critical time and expose him for who he truly is—the antithesis of reform.” This official noted that the “campaign will begin immediately and include both earned and paid media, both nationally and targeted.” This strategy does have one obvious pitfall: Boehner is not well known outside the Beltway. According to a recent CNN/Opinion Research Corporation Poll, 55 percent of Americans have no opinion of Boehner; the rest are split evenly on whether they had a favorable view of the GOP leader or not. It’s tough to demonize a politician whom many voters couldn’t identify.

Can the Democrats gain ground by depicting Boehner as a lobbyist’s BFF? So far, he hasn’t shown much concern about being pegged as in bed with influence-peddlers. Several weeks ago, he told a Times reporter, “I get lobbied every day by somebody…It could be by my wife. It could be the bellman. It goes on all day, every day, every place.” The “Pledge” proposed nothing about limiting lobbying. In answering our question, Boehner declined the opportunity to address the matter. It seems that his idea of transparency just doesn’t cover this particular form of backroom dealing.

UPDATE: In his speech this afternoon, Boehner decried the “broken” policies of the House of Representatives, and offered his prescription on “how we make it function again.” The Ohio congressman called for more transparency in the legislative process, busting up large spending bills into numerous smaller ones, and implementing a “cut as you go” rule to shrink the size of new legislation. What’s more, Boehner demanded an end to earmarks—but noticeably absent from his speech was any mention of lobbyists, the folks pushing the pork-barrel spending. In fact, he didn’t utter the word “lobbyist” once in his 3,800-word speech. And like his response to our question on Wednesday, Boehner had few specific ideas on how he’d reform the Washington culture he loves to rail against.