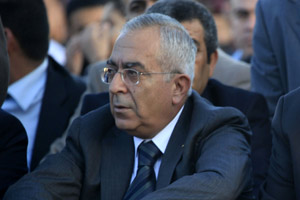 If you build them, it will come—so says Palestinian Authority Prime Minister Salam Fayyad. The “them”: institutions of governance and civil society. And the “it”? Palestinian statehood.

Fayyad, who’s in the United States for a host of U.N.-related events, spoke at the New America Foundation on Thursday about his plan (the optimistically named the “Homestretch to Freedom”) to end Israeli occupation of the West Bank and Gaza Strip. “We Palestinians are not going to get to where we’re going… being idle, submissive or belligerent,” he said. The “Homestretch” will move “Palestinians from… being just reactive to things to being proactive,” Fayyad added.

Building the trappings of statehood is a necessary prerequisite for making statehood a reality, Fayyad argues. Under Fayyad, the Palestinian Authority has built a slew of new government and municipal offices, schools, and hospitals. They’ve assembled a police force and devised a functional central bank and stock market.

But without an agreement with Israel, it’s hard to see what real impact Fayyad’s efforts will have. Fayyad pulled no punches on the Israeli government, calling it out for undermining the process of Palestinian state formation through its blockade on Gaza and hundreds of official and un-official security checkpoints in the West Bank. But the prime minister also addressed the issue realistically, noting that a state’s ability to maintain its own security is vital to its very existence. He stressed that, in the meantime, Palestinians should work to cultivate a sense of the inevitable about statehood.

Fayyad’s vision for Gaza, though, was harder to buy. He said that Fatah must continue “speaking with one voice” to Palestinians in Gaza, which is ruled by the terrorist group Hamas. Addressing Gazans’ needs—clean water, new schools, and safe passage to and from the West Bank—will be key to drumming up support for the Fatah in Gaza, Fayyad said. He suggested that Fatah’s disagreements with Hamas should be sorted out politically; political plurality, he argued, is the sign of a mature democracy. But pluralism won’t change how Israel feels about Hamas. Nor does it increase the odds that the United States will come closer to recognizing the group as a credible, non-terror sponsoring partner.

Pie-in-the-sky aspriations aside, Fayyad has backed up his technocratic rhetoric with action. But do Palestinians stand by him? A recent survey showed that though 40 percent of Palestinians rate his performance as good or very good, only 13 percent support him as prime minister. And Fayyad was appointed—not elected—prime minister by Palestinian Authority President Mahmoud Abbas. (He was reappointed last March.) To secure a real democratic mandate, he’ll need to show that creating the conditions for statehood actually translate into a more livable life for Palestinians.

On Thursday, Fayyad seemed less concerned with his political future, and more fixated on continuing to build and shape the skeleton of a functional Palestinian state. “What is it we will have lost for trying?” he asked. “Is it the 120 schools that we were able to build over the past two years? Or some 1700 kilometers of new roads, or 1400 kilometers of new water networks?” Palestinians are already better off, he argues. That in itself made the “Homestretch” plan worth the effort.