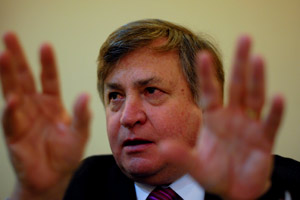 Do the Republicans have a chance to fundamentally remake Washington by picking up 100 House seats in the coming elections? Dick Morris—the Fox-friendly, right-wing political consultant who once upon a time advised the Clintons—says they do. At least, that’s what he’s telling potential donors to his super PAC, called Super PAC for America.

Super PACs are a new type of political action committee, ushered in by recent court and Federal Election Commission rulings, that can raise and spend an unlimited amount of money to influence a federal election and can expressly campaign for or against individual candidates. In the past week, President Barack Obama has slammed Karl Rove and Ed Gillespie, two former George W. Bush aides who have created a pair of outfits to raise and spend money to help GOP congressional candidates, and the Chamber of Commerce for funneling tens of millions of dollars in secret campaign cash into the midterm elections. And Morris is trying to get in on the action—even if he’s a bit late in the game. On October 4, he and his colleagues sent notice to the Federal Election Commission that they were forming Super PAC for America, and it “intends to raise funds in unlimited amounts” for independent expenditures in federal elections.  (That means the PAC will not donate directly to candidates, but instead fund its own efforts—mainly ads—to oppose or support candidates.) Within days, Morris was sending out fundraising emails to conservatives.

In one of those solicitations, Morris writes,

We have a very ambitious goal for Super PAC. I am calling it “Project 100.”

Our plan is for the Republicans to win 100 seats in this year’s congressional elections.

I have studied the numbers very carefully, and we believe that this can be done and will send a shockwave through Washington and around the world.

The GOP needs to gain 39 seats to win control of the House. The overwhelming consensus of veteran political handicappers is that the Republicans are within reach of snaring that many seats. But none of the established House-watchers are predicting a 100-seat gain for the GOP. Is Morris, then, taking conservative contributors for a ride?

In his fundraising email, Morris asserts that “there are 50 likely seats that Republicans will win this year” and the Republican Party and other donors “are contributing heavily” to these races. The Super PAC for America, he maintains, will select 50 “second-tier” races for seats the Democrats consider “safe.” Morris claims, “With a relatively small amount of money spent by Super PAC in these districts we could win an additional 50 seats, giving Republicans 100 new seats for this Congress.” And he says he’s looking to raise $20 million, noting that about $400,000 dumped into a congressional district will “give us one more Republican in Congress.” But if you can’t afford to give Super PAC for America $400,000, he suggests you consider $100,000; $50,000; $1000; $5000; or $250.

Can Morris raise $20 million in four weeks for his project—and then figure out how best to deploy it? That seems a tall order, especially if he’s relying on solicited email contributions—though it’s possible he has several big-money sources already lined up. (The accountant who registered Super PAC for America with the FEC, Robert Watkins, was a major fundraiser for Mitt Romney’s 2008 presidential bid.) Mother Jones sent Morris several questions about his endeavor, asking him to explain why his political calculus about the House races differs from other handicappers and whether his Super PAC for America will reveal the name of its contributors. He did not reply.

In the meantime, Morris has also hooked up with Citizens United, the conservative group that produced the anti-Hillary Clinton movie that led to the Supreme Court’s notorious Citizens United decision, to sell a film to conservative and tea party types prior to the November 2 elections. The movie, Battle for America, is billed as a “call to action by Dick Morris to take back our country.” The trailer cites Obama’s remark that the original Constitution was “an imperfect document” (a reference to slavery) to make the case that the United States is in the midst of a “new culture war,” and the president does not understand “the foundations of America.” Relying on the observations of Newt Gingrich, Ann Coulter, Fred Barnes, and Lou Dobbs—and featuring graphic images of explosions and bombed-out cityscapes—the film contends that Obama’s “radicalism” is literally destroying the nation. In a separate email to conservatives, Morris calls the movie “the ultimate weapon for the 2010 elections” and “the WMD of this election.” He asks people to order the film—it’s only $19.95—right away, noting that when he spoke at at tea party rally in Orlando, he sold 300 copies in half an hour. By selling thousands of copies of Battle for America, Morris and Citizens United stand to pocket tens of thousands of dollars, perhaps a lot more.

In the closing weeks of the election, Morris is working hard to shake cash out of conservatives for his anti-Obama efforts. But he’s using a sales pitch—100 GOP House pick-ups—that appears to be iffy at best, if not exploitative. Democrats certainly should not worry too much about Morris’ 100-seat goal. After all, in a 2005 book, he predicted that only a presidential bid by Condoleezza Rice could prevent Hillary Clinton from winning the 2008 election.