Grist has sung the praises of building efficiency so often we’ve taken to recycling our old jokes (and they’re not even good ones). We’re usually looking at the big-picture questions of climate, economy, and jobs. For example, there’s nothing better Congress could do right now than pass a well-designed retrofit program like the Home Star bill, which would save 44 times the amount of energy that spilled into the Gulf of Mexico this summer. 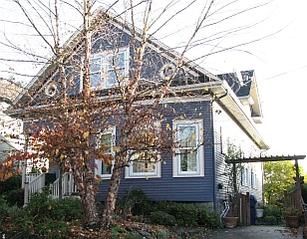 An actual house using actual energy (Langdon Marsh’s Seattle bungalow): All photos: Jonathan HiskesBlah, blah, green jobs, blah. Screw all that top-level policy for a moment. Let’s take a look at how this stuff works on the ground.

I ventured out into the Real World (soon to be acquired by Google) last Friday to shadow Paul Holt, who runs home-energy inspections for the Seattle company EcoFab. Paul remodeled homes for much of his career, then moved into selling high-efficiency windows until he realized that “wasn’t really the answer to energy efficiency.” So he studied for the Building Performance Institute home performance certificate and passed the test two years ago. He’s also a photo and printmaking artist.

We met on a leafy block in the city’s economically and racially diverse Central District, where he was inspecting a Victorian bungalow built in 1909. Here’s what I learned watching him. 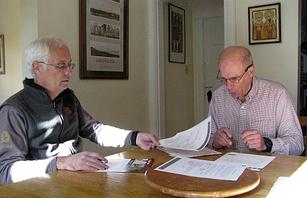 It’s a social job. Assessing the energy performance of someone’s home is a surprisingly intimate process. Paul moved furniture (to check vents) and peered into the basement, attic, and closets (which are often poorly insulated). But first he spent nearly an hour at the customer’s kitchen table explaining what he was going to do and what to expect. Social skills and confidence seem to be essential. It’s also nice to take off your shoes inside.

I failed spectacularly in my goal to hear from an Ordinary Homeowner. I had hoped to see how a non-enviro-wonk experiences an energy review. By sheer coincidence, Paul’s morning assignment sent him to the home of Langdon Marsh, former environmental commissioner for the states of New York and Oregon. Nice guy.

Comfort matters more than pocketbook savings—for some homeowners. Langdon prefers to keep his house cool (60 degrees) but wants a good way to heat up only the living room when he and his wife host guests. That was his main reason for the review. Research on homeowner motivations by the Community Energy Challenge in Bellingham, Wash., found the same thing—financial savings aren’t the only selling point. 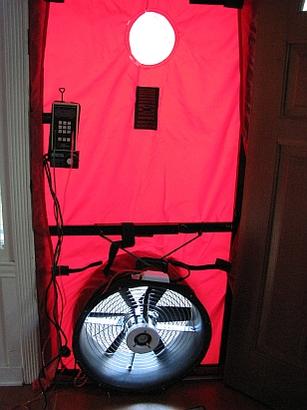 The blower makes small leaks perceptible.It helps to learn firsthand. The most interesting part of the four-hour visit was the blower-door test. Paul used a large fan with an airtight skirt to blow air out the front door, depressurizing the house and accelerating small air leaks so they’re easier to find. Cold air coming up from the basement doorway felt like a minor squall. Even tiny leaks passing through light-switch plates were perceptible. Langdon followed Paul around and felt each leak for himself—which make it easier to understand the problem.

Thermal imaging cameras are nifty. They make it visual and perceptible where heat escapes—both through air leaks through solid surfaces. Langdon will get a series of photos that Paul shot.

Attics should get insulation first, then walls and basements. Because heat rises. Windows are so expensive they’re rarely worth replacing for heating-bill savings alone.

Most progress depends on the homeowner. After four hours, Paul left with some tentative recommendations—seal the basement door; add insulation to the attic, the ground floor, and the walls (in that order); and consider replacing the oil furnace with a heat pump. At most houses he also installs CFL lightbulbs (Langdon already had them). Within a few days, EcoFab sends a more detailed energy score and list of recommendations. From there, it’s up to the homeowner to decide whether to pay for any of the improvements and put them out to bid. (Langdon says he’s inclined to follow up on at least some of the steps.) 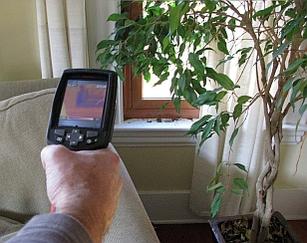 Paul’s thermal imaging camera detects heat leaks. And ghosts.Utilities are driving the retrofit industry right now. EcoFab offers energy reviews for $400. The local utility, Seattle City Light, provides a $305 rebate for Langdon’s zip code, cutting the price by 76%. Few homeowners call up wanting to pay full price, Paul said. This seems to be the case in most places—incentives from utilities are the industry’s foundation, given the absence of federal investment.

Utilities aren’t paying for reviews and retrofits because they’re tree huggers. They’re doing it because cutting demand is cheaper than building new power plants. All together now: Efficiency is the cheapest form of energy.

Renters are in a fix. My wife and I live in a house nearly as old and just as leaky as Langdon’s. But we’re not gonna spring for insulation, or even an energy inspection, because we don’t own the place. Our landlord isn’t going to pay for much because he doesn’t pay the utility bills; we do. It’s a common dilemma. I need to look into ideas for cracking this nut. What are the best proposals out there?